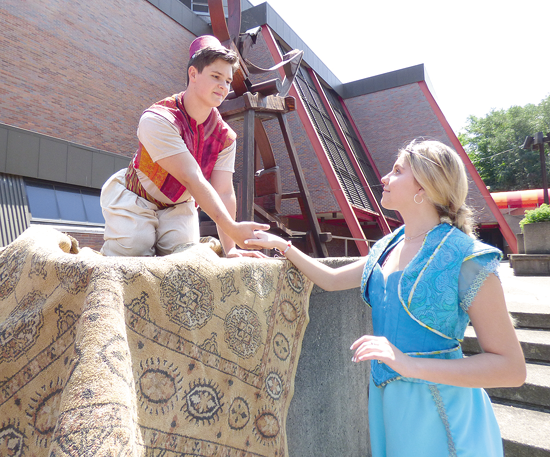 Aladdin (Cody McKenrick) will look to sweep Jasmine (Izzy Baker) off her feet at Artpark.

For one month each summer, Artpark & Company theater academy students can imagine, explore and create. Paschal Frisina III and his team create a shining, shimmering, splendid program where actors have no one to tell them no, or where to go, or say they’re only dreaming.

This year, Frisina said, “It is a refreshing reset of what we tried to do two years ago with ‘Fiddler on the Roof,’ where the kids are sort of like students and residents for the month. There’s so much going on here. And they’re the unique thread through-line through the whole summer, where they’re the ones here every single day. And it’s nice that they have the space. We’re lucky – we’re blessed – that we have the opportunity to use the space exclusively for a month and get to produce a show on this stage.”

Izzy Baker, 15, of Las Vegas, a returning camper, said, “I love it here. Everyone is super-enthusiastic and kind, and it’s just been a fun experience.”

A participant of other acting courses, Izzy noted, “I think this one’s definitely advanced.

“We have a lot of super-cool costumes, an awesome set, a great director, great music director, choreographer – everyone. Everyone really puts in their all, and it’s amazing.”

Theater camp will conclude next weekend with a production of “Aladdin Jr.”

As was the case with “Fiddler,” this show is entirely student-cast. 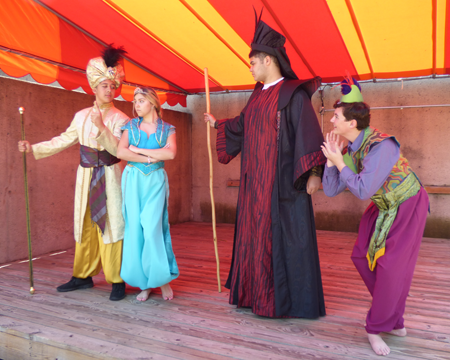 “The kids are excited to have all the featured roles, to have all the feature parts. They’re not just there to accompany others, which is good in its own experience,” Frisina said. “But, as far as it to be an academy, they always need their own show, or why are they doing it? So, this is a refreshing reset and reinvigorating opportunity for everybody. And we are all super-excited.”

Izzy said, “I do a lot of community theater in Las Vegas, so, I normally work with older people. I’ve done high school shows and everything, too. This is kind of like in the high school (arena). And I really like that, because everyone is close to each other’s age; we can relate to things; and it’s fun to connect with people.”

“I love it,” she added. “I think it’s good to learn from people that are a little bit older than you, and also kind of be like a role model to the younger ones – teach them how theater works, and how it’s a fun experience and a cool career.”

Izzy will play Jasmine. She said, “I’ve always loved ‘Aladdin.’ It’s been one of my favorite movies. And the new one just came out, so we were all kind of in big anticipation of it. It was everywhere. And I thought it was really cool that we were doing such a well-known show that’s really close to a lot of people’s hearts.”

Cody McKenrick, 16, of Buffalo, will play the title character. The St. Joe’s student said, “Personally, I was gonna do the camp, but when Pascal told me at school that they were doing ‘Aladdin,’ it was just like it smacked me right in the face. I was like, ‘I gotta be Aladdin. I gotta do this.’ I got so excited. And now everything is falling into place. And I’m extremely excited to put on a show that’s so well-known.”

“I thought of it when ‘Aladdin’ came through Buffalo in the fall,” he said. “I called (Executive Director) Sonia (Kozlova Clark) and said, ‘It’s “Aladdin.” ’ I said, ‘All these kids in this community are going to go to Shea’s and see it. Then they’re going to know that the movie’s coming out in May. And then they get to do it themselves in July. It’s set up perfectly, logistically. So that was our aim, to push around that.” 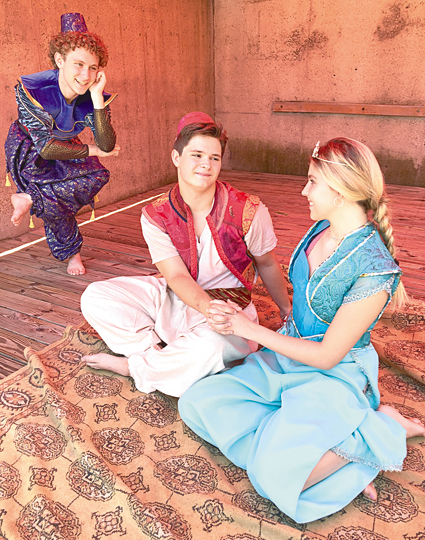 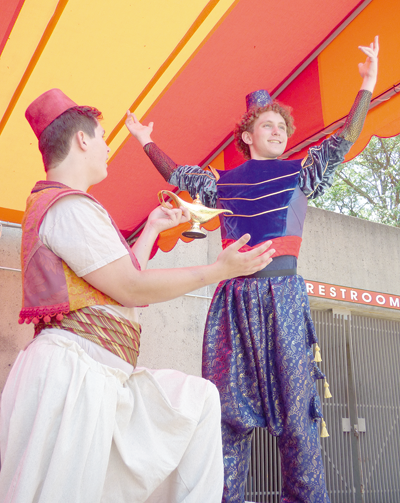 The actors have a wealth of material to pull from. The story of Aladdin and his friends has been told in two Disney movies (one animated and another live-action), a theater play, and TV reinterpretations via “Once Upon a Time.”

“I like to follow a lot of the animated movie, because I really liked the vocal inflections that she went with, and how she kind of portrayed her,” Izzy said. “And, you know, it’s 2-D animation, so it’s bigger, basically, because there’s a lot of big moves. And I think that that’s important, especially in a theater so big, to have larger movements, so people can see you on stage.”

Max Damiani, 16, of Buffalo, also a student at St. Joe’s, plays Genie. He said, “It’s so fun to go out and be rambunctious and crazy and bouncing off the walls. I haven’t played a character like this before, I don’t think – running around, and shouting up and down, and making things appear out of nowhere. It’s so much fun. It’s being big – like Robin Williams or Will Smith has been. It comes kind of naturally with running around and just kind of reading the lines, being the part.”

Cody noted, “I’ve worked with Pascal a lot on what’s called the Stanislavski method, which is you take the context of the show, and you figure out how you would react, and put it in the context of your character. So, I like to draw from the animated movie – like the child Aladdin, super-high energy and everything. But a lot of it has come from deep within, especially with the ‘Proud of Your Boy’ kind of theme in the show, because it connects to me personally with my mom.”

That song he referenced is part of a new twist Frisina added into “Aladdin Jr.”

In the show, “They hint on what Aladdin’s backstory is, and where does he come from? Why is he a street rat? Why is he a loner? And there’s a beautiful song called ‘Proud of Your Boy.’ And it’s a ballad that Aladdin sings alone. It’s about being proud; hoping his mom and dad are proud of him, because they’re gone now. They’re deceased,” Frisina said. “So, I had this thought (and) no one’s ever done it. I saw the Broadway play. I’ve seen the movie. No one ever looks into what happened to mom and dad, and why is he a loner. So, during that song, specifically, we’ve cast a young Aladdin, and his mom, from long ago, in like a silhouetted flashback, where we get to see him receive his vest for the first time and sort of gain his confidence as a sprite little guy. And then his mom fades away, and he’s left by himself.

“And we get that idea that, since a young boy, he’s always been on his own – which I think feeds into the actual story. Instead of it just being fun and games and, you know, flash magic, there’s a real story here, with this guy lost his parents. He’s a total loner. And he’s trying to be someone good for someone else, and he doesn’t know how to do it. He’s learning how to be himself through all of that despair.

“I think that’s an awesome, mature storyline to give the kids to work on.” 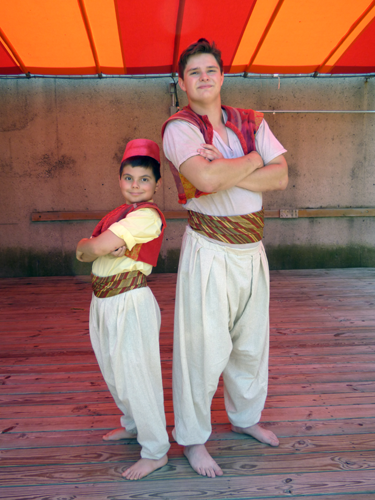 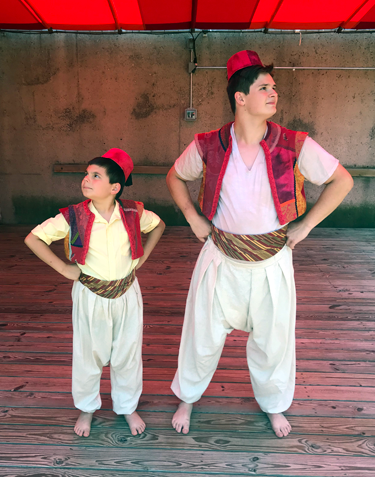 Portraying the junior version of “Aladdin” is 10-year-old Gabriel Frisina of Buffalo.

“I’m excited that, one, I get to be Aladdin. Technically,” he said. “Two, that I have my own little mini-scene with the other Aladdin on ‘Proud of Your Boy,’ on that song.

“I’ve done two full years of this. This is my third year, and all that hard work leads up to me getting one of the main parts.”

Speaking of the theater academy, Gabriel said, “I like that I get to be with other people, try to make friends, and just put on a glorious show.”

He added, “The first year I was here, I did have a little bit of stage fright. I’d gotten over it by the second year. And I’m just excited to do another one.” 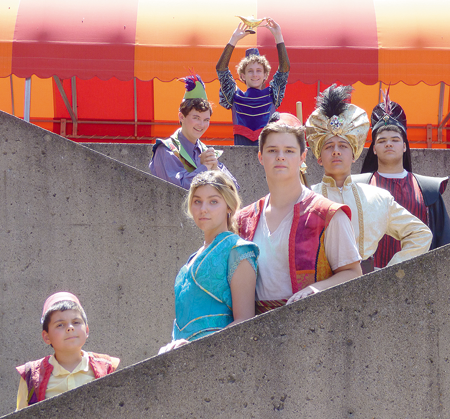