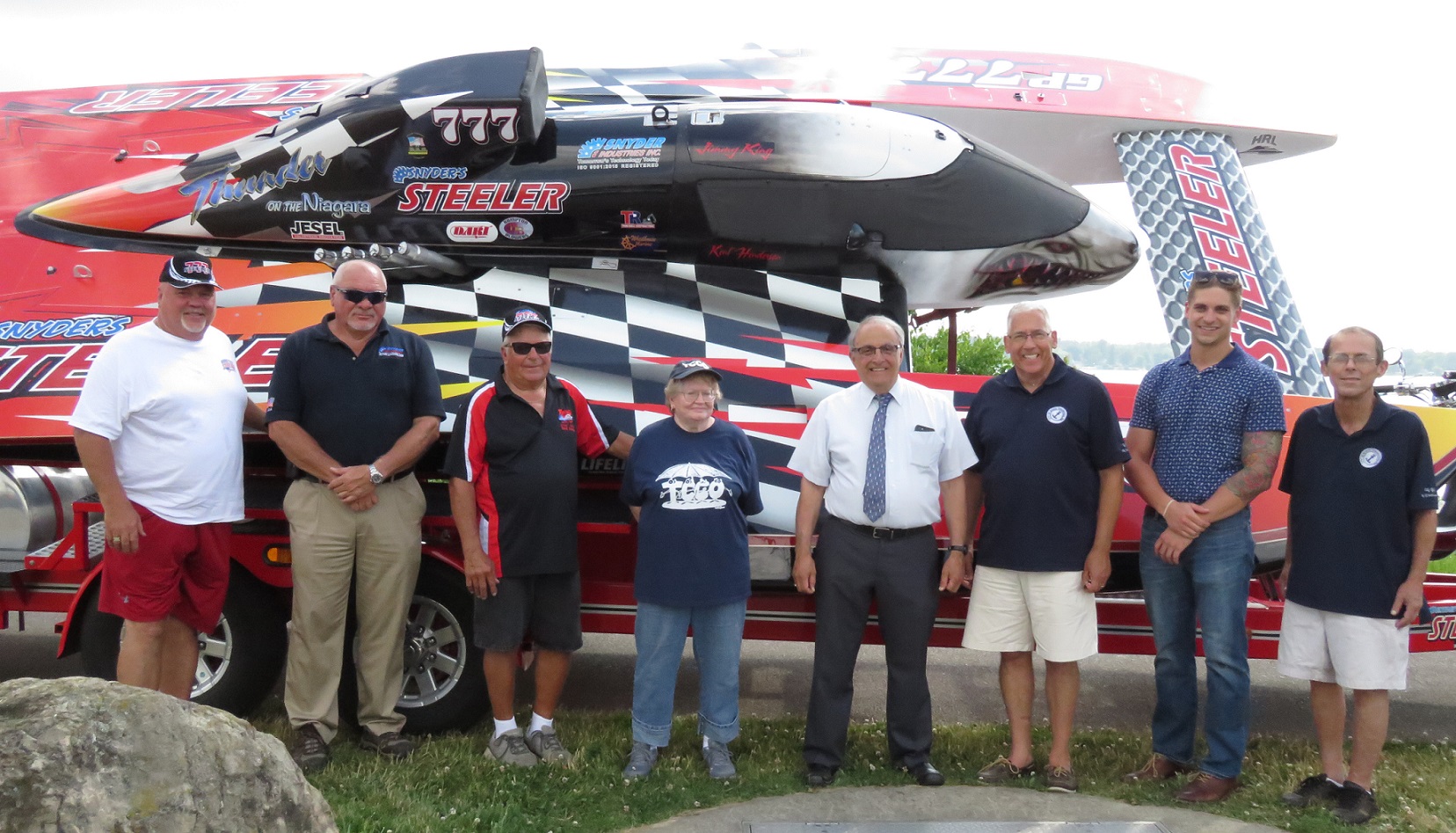 Although water levels have been high around Western New York – leading to the cancellation of several water-related happenings – locals can look forward to a community favorite off the shores of the Niagara River.

Coming Saturday and Sunday, Aug. 3 and 4, Gratwick Riverside Park in North Tonawanda will host the 14th Thunder on the Niagara boat racing event.

The show, highly known as "the fastest show on water," features over 70 race boat teams and hydroplanes which glide along the river at approximately 170 miles per hour. Teams come to compete from across the United States and Canada.

“It’s with excitement and enthusiasm we again announce the Thunder on the Niagara coming,” Pappas said, just prior to a train horn blasting on the railroad parallel to Gratwick Park, which led to his next quote.

“As I’ve said in past years, this is probably one location where you see every mode of transportation. From cars to trucks to planes to trains and especially the boat races,” he added.

The venue – Gratwick Riverside Park – provides a scenic outlook to the Niagara River and Grand Island, making it a soothing and relaxing spot to watch an event. Pappas said it’s a blessing that Gratwick Park is part of the NT community and a great setting for Thunder on the Niagara.

“We’re very lucky here (and) very fortunate here in our community to have this venue, but to have this organization in Thunder on the Niagara come to this venue, because it draws thousands of people every year. … People from all over the area, people from all over Canada, all over certain parts of the world and the United States come to this event. What makes it so special is it’s very family-oriented – there’s activities for everyone – along with boat races that get up to 170 mph, and they literally fly across this river. It’s exciting,” Pappas said.

Pappas added that the event gains more of an audience each year, and even people who weren’t boat enthusiasts in the past are now attending Thunder on the Niagara.

Event organizer Gary Roesch said attendees look forward to Thunder on the Niagara year in and year out because of the great venue.

“The Gratwick area and the North Tonawanda region is so unique, and people look forward to the hospitality that they receive here,” Roesch said.

Roesch went further to note the events that will come to the park.

On Sunday, racing will begin around 10:15 p.m. During the intermission – noon to 1 p.m. – there will be skydivers. Racing will conclude at 5 p.m. and awards will be handed out at 6 p.m.

“We are very, very grateful to the City of North Tonawanda and the officials, but most importantly, we’re so grateful to our sponsor Tom Snyder of Snyder Industries,” Roesch added.

Snyder said his company has been the primary sponsor of the event for the last six years. He added that a sign-up sheet was posted online Wednesday to attend the event in the sponsor’s tent, and well over 100 names were already on the list within a day. The results led him to believe there would be a record attendance in the tent.

“There’s something here for everyone,” Snyder said. “From the kids zone to the car enthusiasts to, of course, the boating people. We’re looking forward to a good event and a safe event.”

Though admission is free, parking will be available at the park for a $10 donation, which includes a race program. Portions of the parking fee will benefit the Twin Cities Community Outreach.

For more information, visit the event’s Facebook page, or go to www.thunderontheniagara.com. 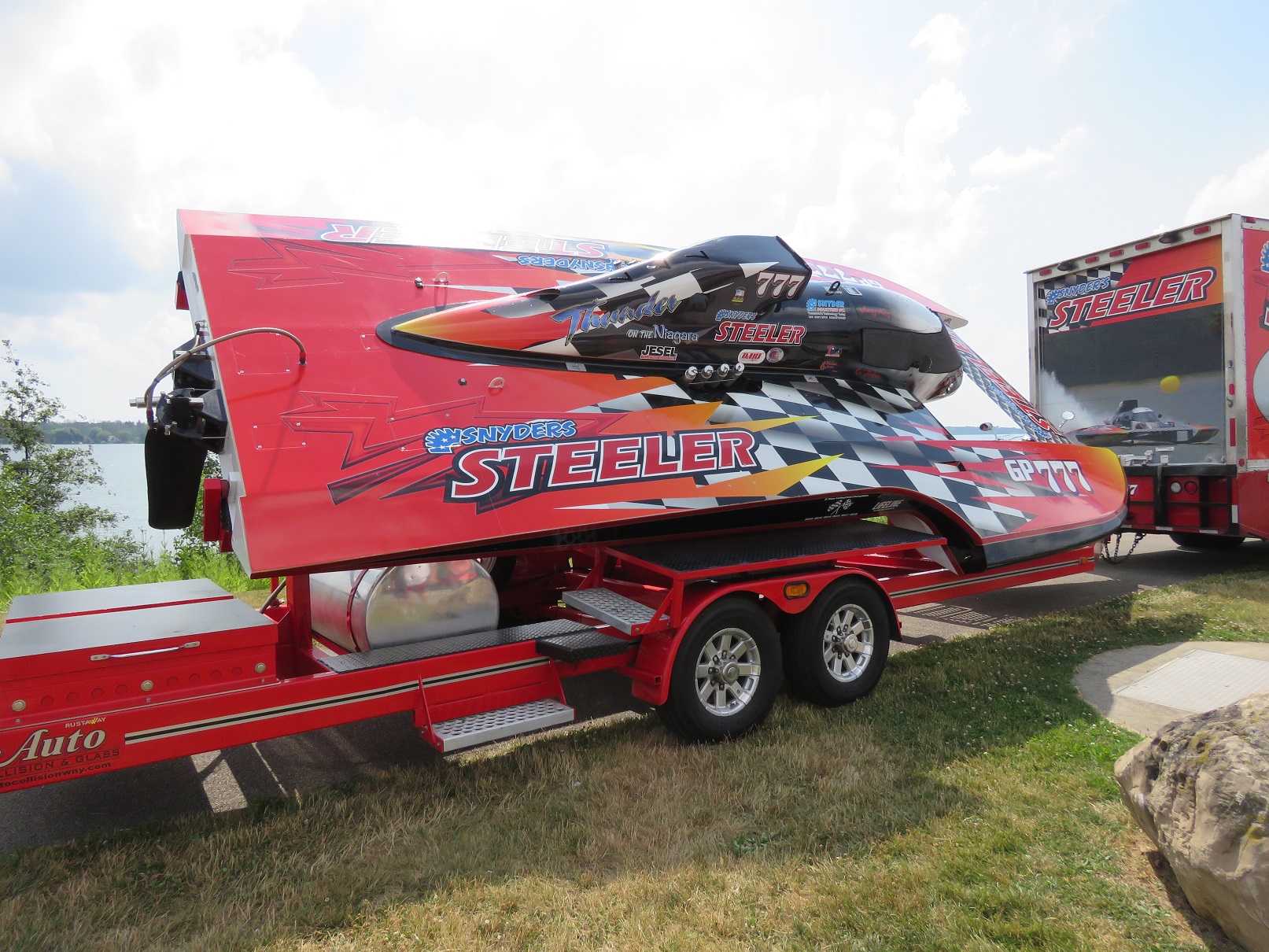 An example of one of the hydroplane boats that will roar along the shores of the Niagara River at the 14th Thunder on the Niagara boat race event.