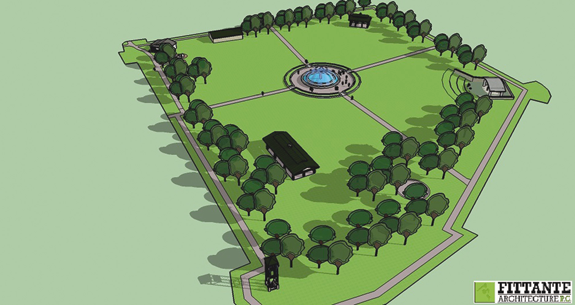 Pictured here and below are an artist's renderings of the Village of Lewiston's conceptual plan for Academy Park.

by jmaloni
Sat, Nov 10th 2018 07:00 am
By Joshua Maloni
Managing Editor
Village of Lewiston Mayor Anne Welch on Monday unveiled a conceptual plan to revitalize Academy Park. Proposed improvements would allow the municipality's most prominent green space to be used year-round.
As a result, the Niagara County Peach Festival would need a new home. Welch and the Board of Trustees discussed this with members of the Lewiston Kiwanis Club, who run the annual event.
"Our Parks and Recreation Board has been working on a plan for Academy Park, to redevelop it, take down the old bleachers, move the bandshell out of the way, and redevelop the park," Welch told Kiwanis Club President Marty Pauly and a half-dozen members. "We want to see the park (available) for everybody. Our thoughts are we can redevelop the park and still take care of Kiwanis by letting you use the Lewiston plateau. I know you've had it up there before. You have more than enough room to put the Peach Festival. There's acres of land. We want to keep the Peach Festival; we just need to move it two blocks away."
The Peach Festival has been staged at the five-acre Academy Park for almost 60 years.
A new Academy Park plan - which Welch said is not cast in stone - shows the land divided into four quadrants, with:
•No. 1: A pavilion situated where the bleachers are now, at Center Street and Portage Road (a new Veterans of Foreign Wars monument park would be in this corner);
•No. 2: A new bandshell in the Portage Road and Cayuga Street corner (replacing the existing stage);
•No. 3: A second shelter area at the corner of Cayuga and South Ninth streets; and
•No. 4: A new comfort station (restrooms) near the Niagara River Region Chamber of Commerce office on North Ninth and Center streets.
The park would be rimmed by new walkways (sidewalks or pavers) and possibly artworks, with a fountain or splash pad and/or ice rink situated in the center.

Parks, Recreation and Conservation Board member and Recreation Director Brendan McDermott said, "We want this to be the gateway into the village. Beautify it. Bring people in so that there's more daily activities."
Welch and Department of Public Works Superintendent Terry Brolinski said they are not pleased that park ground ruts from the recent Peach Festival have yet to be fixed.
"It's unsatisfactory; it's unsafe for anybody to use," Brolinski said. "Nobody's up there taking any command of this."
"You just get everything graded up and seeded from the Peach Festival, and then the ice rink comes in," Welch said. "And that gets all torn up. And then in the spring, they go back and they seed it and grade it and fix it all up. And they get everything just right, and then the Peach Festival comes back in. The park never recovers."
Welch said future park renovations would be ruined by large trucks moving festival rides in and out of the park: "I can't have semis driving across that park."
Pauly said, "The size of the Peach Festival, it's not going to be cleaned off within 24 hours. It's just too large of a festival. We have the sheriff's workforce program there working to help to get the stuff off the field. As far as the landscaping damage ... I do think the landscaping damage can recover. I do know the Town (of Lewiston) has offered to come in and repair it."
Welch said, "This is the peoples' park, and they can't use it, because it's always a mess after the Peach Festival."
Welch said renovating the park would allow for more activities and make the site another tourist stop. Academy Park also would tie in with the Niagara River Greenway Trail.
Trustee Vic Eydt said, "The whole idea of this is the state wants to incorporate that bicycle path from Lake Erie all the way to Lake Ontario. A lot of it has already been done. One of the sections that hasn't been done yet, they want to use near the parkway. ... The Greenway said they want to incorporate the village as part of that bicycle path/walkway from Lake Erie to Lake Ontario. In doing so, when they come down the parkway - where they open the road for Artpark, over by the day care center (on Seneca Street) - they want to bring that bicycle path down to that point, and then down through the village, down past the car wash, through the park, down Mohawk, and then tie it into the bicycle path that already exists next to the parkway."
Welch met Tuesday with Greenway Commission Chairman Greg Stevens.
"They want Lewiston to be a destination, a stopover, an information station for people that walk, bike. That will be part of the Greenway Trail," she said Monday.
Welch noted the village could receive Greenway or New York State Parks funding for some of the proposed Academy Park additions.
She initially suggested the Peach Festival would have to move in 2019, but later said that would be dependent on the Greenway Trail timeline.
Regardless, "I just feel that Kiwanis and the Peach Festival has just really outgrown the park," Welch explained. "It used to be two days - Saturday and Sunday - and now it's four days (including Thursday and Friday). We used to have smaller rides. The people didn't stay on-site. Now we have the large motorhomes, we have the state-of-the-art rides, and everything is just jammed into the park." 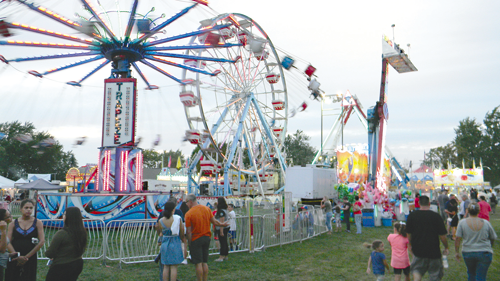 A scene from the 2018 Niagara County Peach Festival.
When asked what the fear is in moving to the plateau, Peach Festival Parking/Shuttle Chairman Gerauld Gismondi simply said, "People stop showing up for the festival."
He explained, "When we added the shuttle ... it took five years for people to start using it. That's just changing one thing about the festival."
The Peach Festival did relocate to the plateau for two years at the turn of the century.
Kiwanian Jack Hanrahan said, "If it was so great, why we didn't stay there?"
Pauly said, "It's such a success for us and the children and the community where it is right now, that it's tough to accept the fact that there are people who really want to see it moved."
"They're still going to come," Welch said. "And they might even like it a little better, because they might be able to park closer."
Kiwanis Club members expressed other concerns, notably the time it would take to stage the event at a new location (not to mention renting an actual stage), the plateau's infrastructure, available parking and, most importantly, the impact a move would have on the organization's contract with midway provider Amusements of America.
Hanrahan said, "We didn't want to go to four days, but we have an amusement (company). They made us go to four days."
He explained, "Without them, we don't have a Peach Festival. Ride companies aren't that available anymore. We were lucky that we got this (one). ... Let us have them take a look at it and see what they say."
Meeting attendees also discussed the Peach Festival's fiscal impact on village businesses and effect on public safety/traffic patterns.
Welch said the Kiwanis Club could have extra festival days and additional rides at the plateau. She speculated this would be an attractive option for Amusements of America.
But Kiwanian Dean Beltrano said additional rides, added lighting and generators - plus a rental stage - would be sizeable expenses for the club.
The Peach Festival is the Kiwanis Club's largest fundraiser. Accordingly, "The biggest concern is that we wouldn't have as much money to put back into the community," Beltrano said.
To date, $1 million in Peach Festival funds has been donated to local charitable causes.
Welch said, "It can be bigger and better than ever (at the plateau), and it's certainly visible, because you can come down (Lewiston) hill and see it."
The Village of Lewiston owns more than 20 acres of plateau land off the road toward Artpark's upper entrance. Welch said she wants to develop this area, as well, with a pavilion and other amenities.
"It's not like I'm telling you, 'We're done with Kiwanis. We don't want the Peach Festival anymore.' Of course we still want the Peach Festival," Welch said. "Kiwanis does an outstanding job, and we appreciate everything that they do. By simply moving you up to the plateau, you get what you want; we get what we want."
"Well, I don't know if this moving up to the plateau we're going to actually get what we want," Pauly said. "It will take time for us to realize if we got what we want over there."
Welch said other Academy Park events, including the Wine Festival and the artisan market, could continue in a redesigned park. 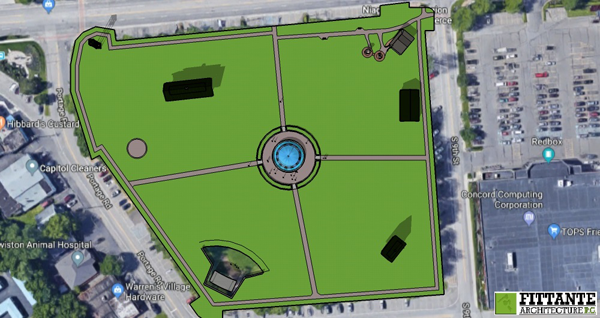