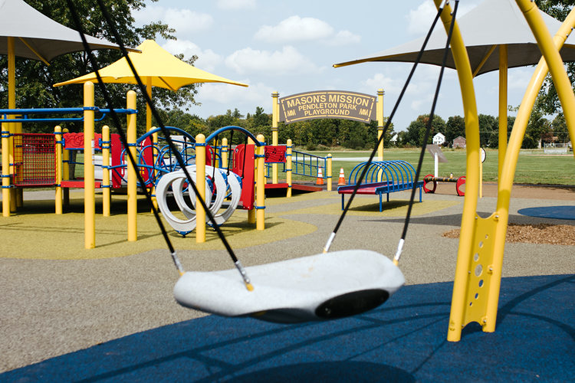 by jmaloni
Wed, Sep 5th 2018 12:40 pm
By Joshua Maloni
Managing Editor
A new playground project announced last month got a big boost Tuesday, when Jason Evchich - the man behind Mason's Mission - offered to help the Village of Lewiston and the Lewiston Community Lions Club bring the inclusive play space to life.
"I am going to be your asset," Evchich said. "If this is something you want to move forward with, I can do as much or as little as you want to make this project happen," including designing the play area and assisting with grant applications or fundraisers.
The proposed playground is eyed for Marilyn Toohey Park, behind the Red Brick Municipal Building. While it would be designed primarily for children with special needs, all kids would be welcomed to participate.
Lions Club Past President Lynn Bahringer said Evchich is "the true inspiration for the all-inclusive park."
"I went to a picnic in Pendleton and I saw this really incredible park, and I saw children playing on it - children that were handicapped, in wheelchairs - and I said, 'Who built this? What kind of park is this?' " Bahringer explained. "Jeff Jarvis, who is the district governor for the Lions Club, said it was a project from Mason's Mission, for (Evchich) to build an all-inclusive park where his children could play."
Evchich and his wife, Jennifer, have three children: McKenna, 7; Mason, 5; and Matthew, 4. They noticed Mason was "falling severely behind in his milestones" as he approached 18 months of age. After a series of tests, Mason was diagnosed with hypomyelinating leukodystrophy. Evchich said the disease is similar to the Krabbe leukodystrophy that afflicted Hunter Kelly, son of Buffalo Bills Hall of Fame quarterback Jim Kelly and his wife, Jill. Mason's leukodystrophy, however, is not degenerative.
Both Mason and Matthew have hypomyelinating leukodystrophy and are delayed in walking and talking. McKenna is disease-free.
Evchich said he would watch McKenna play with Jennifer on the pre-existing Pendleton playground, and "It kind bothered me. ... Tremendously," that Mason and Matthew couldn't participate. "So I came up with the crazy idea, one day while I was home, that I would try to build a playground in my backyard."
Remarkably, the Evchich family lives on a street with seven other children who have a disability - from autism to muscular dystrophy. Evchich said, "My wife didn't really think it was a great idea having people coming in and out" of their yard, so the family set their sights on something bigger.
They approached the local government about a public playground, and received a warm endorsement. Evchich said the Mason's Mission Foundation formed in 2016, and work soon began on an all-inclusive play area. He noted more than $450,000 was raised, and the 12,000-square-foot-plus playground was built behind the Pendleton Town Hall (next to the baseball fields). It opened last fall.
"If you guys are serious about doing this, and you want to see what goes on (in Pendleton) ... feel free to come and check it out," Evchich said. "It's an amazing feat. And the mothers and fathers and kids - the response we've gotten has been amazing."
Evchich said he came up with the design for Mason's Mission Pendleton Park Playground upon observing his children and hearing from other parents with special needs children. The play area was designed to provide participants recreational opportunities suited to their needs. It pays special attention to safety, sound, light, motion/movement and sensory play.
"Play is important for children. It's a huge form of therapy," Evchich said. "Interaction is even more essential to a child and a family."
He noted another goal in establishing the playground was "how can we make it as easy as possible to get mom and dad to get their kids here. Because the kids just want to have fun."
There is no project cost or design for the Lewiston playground at this point. Bahringer reiterated funding would come from donations and grant money, not from taxpayers.
"The Lions Club would work with the mayor in designing, and we'll be doing fundraising, also, to pay for it," she said, noting additional help would come from Town of Lewiston Supervisor Steve Broderick and the Town Council.
Parkitects, the company that crafted the playground in Pendleton, would formally design and potentially build the play area in Lewiston.
Bahringer said the new addition would not adversely impact the Red Brick's two outdoor basketball courts. In fact, those could be spruced up, as well.
Evchich said it took 10 months to build Mason's Mission Pendleton Park Playground.
Mayor Anne Welch called the playground a "great idea." She said she hopes the Lewiston project could be completed and the grounds opened to the public by the summer of 2019.
"I would love to see that playground as soon as possible," she said. "I'm sure my board agrees that it would be a great asset to this village, and I can't wait to begin."
Mason's Mission Pendleton Park Playground is located at 6570 Campbell Blvd.