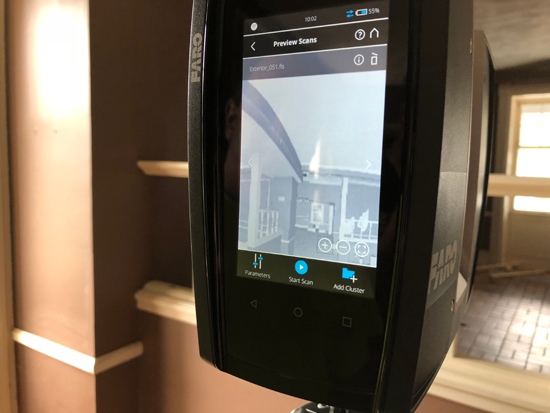 A FARO camera provides an in-depth look at a portion of the Frontier House's first floor large south room.

Village of Lewiston: Frontier House scans to give detailed blueprint of building

by jmaloni
Sat, Jul 28th 2018 07:00 am
By Joshua Maloni
Managing Editor
Niagara Boundary and Mapping Services President Kenneth Lee Slaugenhoupt spent part of the past week laser-scanning the Frontier House. Working inside and outside the building, he used a FARO Laser Scanner, which, he said, is capable of collecting 488,000 measurements per minute with a tolerance of ±3mm (or 1/8 inch). He observed about 175 setups, most of which were five-and-a-half-minutes. The raw data set for the projects is about 480 million data points, which form a "3-D cloud." Slaugenhoupt said he will use the cloud to create a comprehensive map of the 194-year-old structure.
He said a final "movie" will be presented to the Historical Association of Lewiston. The images will also be made available to the village, where they can both serve as a historic X-ray of the Frontier House's many pieces and be used in preparation of full topographic and architectural plans.
These materials will be useful should the Village Board A) execute a signed intent to purchase the Frontier House and, B) fix the property, or if trustees find a private developer to carry out building restoration. The 3-D scans can be used to pinpoint match the structure's stones and mortar, as well as the size and placement of the bricks and boards.
Slaugenhoupt's father, Ken, was officially voted chairman of the Historic Preservation Commission on Monday. He also serves as the HAL president.
"They will digitally scan the outside and all floors of the inside, take photographs, and make an engineering-quality 3-D model of the building as it currently exists today. And then they're going to make that into a (movie) so we can have it available to give to potential developers, architects, engineers who are going to work on (the Frontier House)," the senior Slaugenhoupt told his board. "You can do such things here with that stuff."
He explained full floor plans could be made and evaluated, while the walls would be analyzed for any signs of bowing or coming apart.
A series of spheres are placed around each area set to be scanned. When paired together with a FARO camera and scene software, 3-D images and scans are generated. Kenneth Lee said he expected a total of between 32 and 50 gigabytes of information.
Niagara Boundary and Mapping Services is located on Cayuga Street in the Village of Lewiston. The land-surveying company recently scanned the Military Road School building. A video can be viewed online at https://niagaraboundary.com/laser-scanning. 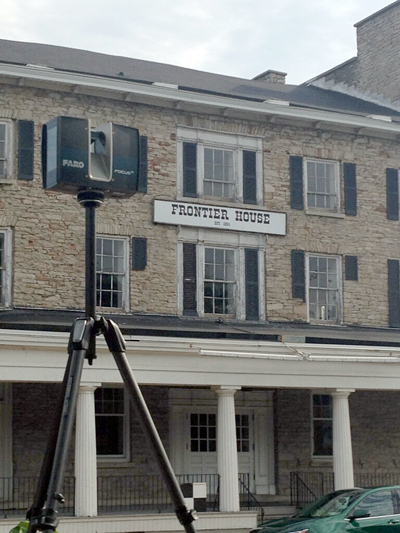