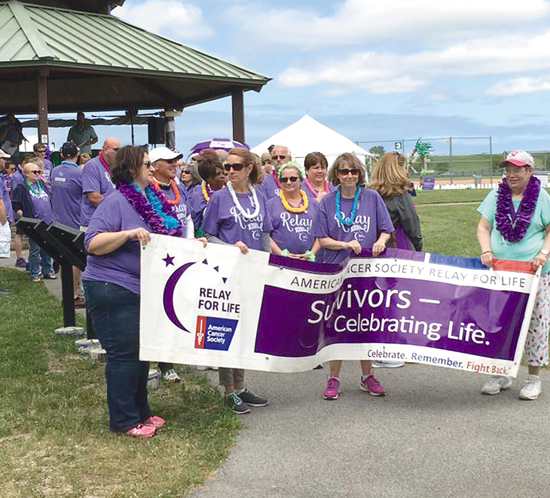 Photo courtesy of the Relay For Life Committee

Fri, Jun 8th 2018 08:00 pm
By Terry Duffy
Editor-in-Chief
Hundreds were part of a special experience last weekend as the 2018 American Cancer Society's Greater Niagara Relay For Life took place from Saturday afternoon to Sunday morning at Reservoir State Park in the Town of Niagara.
Committee member Cheryl Martin said the Greater Niagara Relay, now in its fifth year at the park, was a hit both locally and beyond Buffalo-Niagara. With its Hawaiian theme, the "Re-Lei For A Cure" event attracted visitors from throughout the country.
"We welcomed over 50 cancer survivors, 200 participants and members of the American Cancer Society National Relay Leadership Team, who came as far as California to join us," in addition to local visitors, Martin said.
All came to be part of the Greater Niagara Relay For Life - an event that wages a battle against cancer by honoring victims, celebrating survivors and working toward a solution to the disease.
Emily Tier was one such visitor. A resident of the Finger Lakes area in New York, she is a member of National Relay Leadership Team as well as the Northeast Regional Leadership Team. She also works in palliative medicine.
"I'm right here in my home region this weekend," Tier said in a Relay interview on the Greater Niagara Relay Facebook page. She went on to discuss the commonalities shared by many Relay attendees in their battles against cancer. "Relationships really underscore everything we do in the fight against cancer and our work with Relay For Life and with the American Cancer Society. People underscore what we do.
"But what really matters are the names on these Luminaria bags. Those relationships are what bring this whole movement to life, whether we're here in support of somebody who is fighting right now, whether we're honoring someone who has won their fight, or whether it is in honor of somebody no longer walking the track with us ... these bags all represent those relationships."
"One of the coolest things ... is the Luminaria exchange, where (Relay) events from different states, different parts of the nation, (send) bags to the other side of the country ... to represent that those folks are here," she continued. "It really brings me a joy that their spirits are here fighting. ... It's just an amazing sight to experience, to know that the team at Greater Niagara is Relaying with you."
"(Relay For Life) helps lengthen lives," said Lynn, a vendor from the Grand Island Relay who brought her Tiki bar stand with its Hawaiian fare to the Greater Niagara Relay.
She spoke of what being a part of Relay has meant to her: "We've lost quite a few really good friends that we Relayed with. My mentor in Relay, her battles were 13 years (that she endured), because of money raised from research. There kept being other options, another clinical trial. She was always positive about it. This is why we are out here."
Resident Rita Wozniak, a 40-year-plus cancer survivor, was another who came to celebrate the meaning of Relay.
"I'm a survivor since 1975. I had someone who invited me. I am so happy I was able to do it," said Wozniak, a Relay participant of four years.
Of being a part of this event, she said, "I keep thinking of what these people are doing for cancer survivors. It is wonderful. A lot of work, it is great."
Encouraging all cancer survivors to be part of this experience. She added, "Come, enjoy, meet the people that are helping everyone, there is always hope."
"We're proud to say that, to date (Monday, June 4), we have raised $56,000 in support of the American Cancer Society programs, information and services," Martin said.
She noted contributions to the 2018 Greater Niagara Relay are still being accepted.
For more information on this year's event, or to contribute, visit www.relayforlife.org/greaterniagaraNY.
Categories
NFP Sentinel Sentinel feature