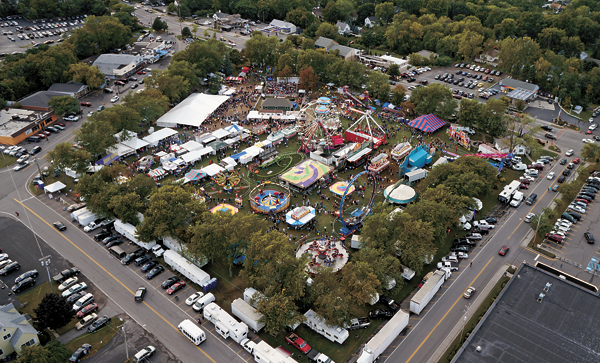 Mon, Apr 9th 2018 12:15 pm
By Jennifer Pauly
President
Niagara River Region Chamber of Commerce
The Kiwanis Club of Lewiston has been chosen as the 2018 Chairman's Partnership Award recipient by the Niagara River Region Chamber of Commerce board of directors and Chairwoman Christine O'Hara. This volunteer service organization has had a long history of supporting organizations and community events in Niagara County and beyond for the past 60 years. We are fortunate to have the Kiwanis Club of Lewiston in our community, with servant leadership at the forefront.
The first Kiwanis Club was started in Detroit in 1915 by a group of businessmen, primarily as a networking organization. In 1919, the focus shifted to service - primarily service to children. The name "Kiwanis" is coined from a Native American word meaning "We Trade," which evolved into a motto of "We Build" and, in 2005, to "Serving the Children of the World."
The Kiwanis Club of Lewiston was chartered in 1958. This year, members are celebrating their 60th anniversary as an organization, now with more than 100 men and women as members. The Kiwanis Club of Lewiston is the second-largest Kiwanis Club in New York.
The mission of the Lewiston Kiwanis Club is community-focused service, striving to improve the lives of individuals and families from all walks of life. The club has several fundraisers throughout the year that help support more than 50 nonprofit organizations in the Niagara Frontier.
The Niagara County Peach Festival is the Kiwanis Club's largest fundraiser. The four-day, family-centered carnival event, parade and 5K run are held the weekend after Labor Day. Volunteers also raise funds at the annual clambake, scheduled meat raffles and by selling frozen yogurt at other local festivals. Clambake proceeds are split between Mount St. Mary's Hospital and the Lewiston D.A.R.E. program. Frozen yogurt and meat raffle proceeds are donated to an international fundraising effort by Kiwanis to eradicate maternal and neonatal tetanus around the world.
The Kiwanis Club of Lewiston also sponsors several local youth organizations with Kiwanis International that have a focus on learning leadership skills through service. Included are The Circle K Club at Niagara University, Key Club at Lewiston-Porter High School, Builders Club and K Kids at Lewiston-Porter elementary and K Kids at the Tuscarora School. The Kiwanis Club also supports the Aktion Club, a program for adults with disabilities.
One can often find the volunteers of the Lewiston Kiwanis Club out in full force volunteering to raise funds for the United Way "Make A Difference Day," selling newspapers and ringing bells for the Salvation Army. In addition to supporting numerous organizations financially, the club delivers food baskets to those who are in need around the holidays, and sponsors the annual Easter egg hunt held every year at Kiwanis Park in Lewiston. The club gives several scholarships throughout the year for high school students, as well as sponsors a $4,000 scholarship to the Niagara County Peach Queen, who serves with the Kiwanis Club during her year of service.
The Kiwanis Club of Lewiston also sponsors two free movie nights for families at Artpark each summer.
Members are always welcomed to join the Kiwanis Club of Lewiston. Weekly meetings are held at 7 p.m. Wednesday in the Village of Lewiston. For more information on membership and upcoming events, visit www.LewistonKiwanis.org. For updates on the annual Niagara County Peach Festival, visit www.LewistonPeachFestival.org.
The board of directors of the Niagara River Region Chamber of Commerce proudly congratulates the Kiwanis Club of Lewiston for its commitment to the children of this community and the support members provide to the numerous nonprofit organizations. 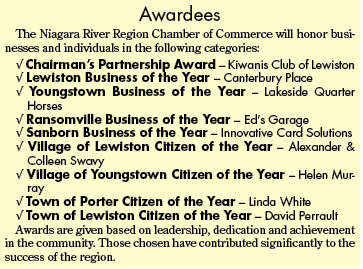 Awards will be presented to those contributing to the success of the local area when the Niagara River Region Chamber of Commerce holds its annual awards gala on Thursday, April 19, at the Niagara Falls Country Club in Lewiston.
The event begins with a cocktail hour and hors d'oeuvres, followed by a sit-down dinner and awards program. A silent auction will take place throughout the evening.
Tickets and sponsorship opportunities are available through the chamber office by calling 716-754-9500.
Categories
Around WNY Home feature NFP Sentinel Top News Features