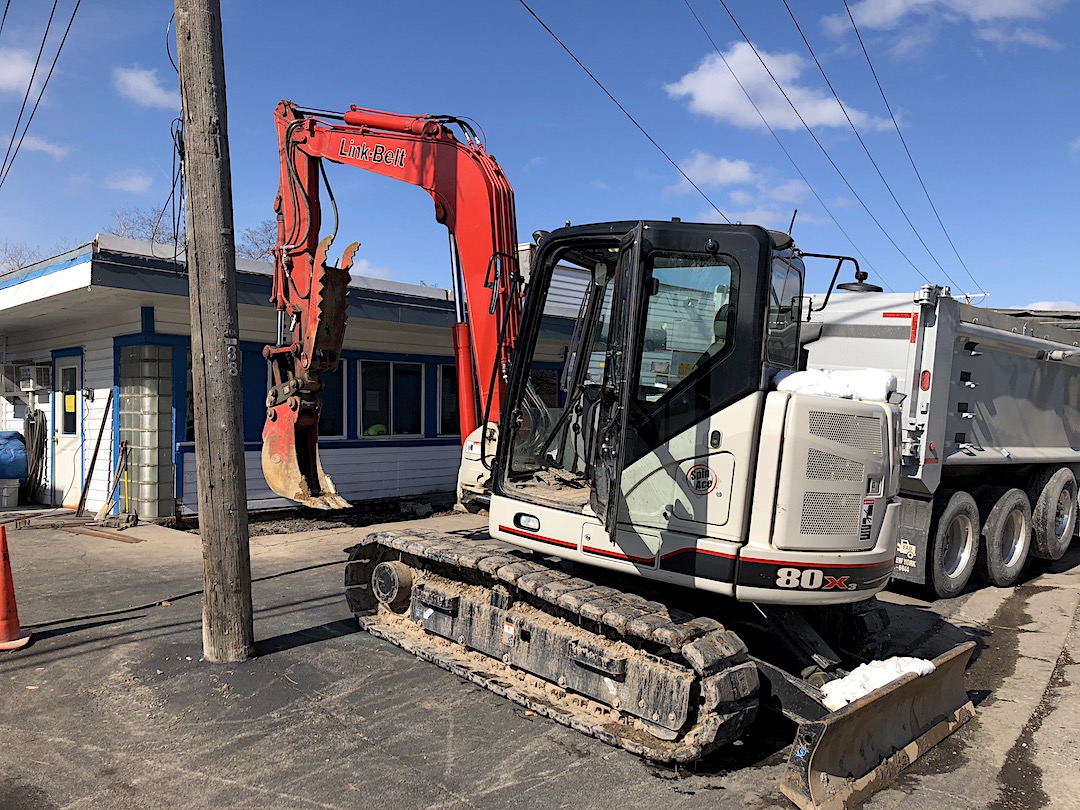 Sat, Mar 24th 2018 07:00 am
Tax rate projected to remain same
By Joshua Maloni
Managing Editor
The second phase of expansion at Hibbard's Original Frozen Custard was approved Monday by the Village of Lewiston Board of Trustees. The Hibbard family was granted a special use permit for a 24-foot-by-13-foot concrete pad and customer queuing area with overhanging canopy. This waiting spot will be located directly behind newly enlarged serving windows, which were previously approved.
Construction work began Tuesday. Kristen Hibbard Trunzo said the renovations would delay the custard stand's opening this spring. If all goes well, she said Hibbard's would open on April 28 - about three-and-a-half weeks later than in 2017.
Architect Jim Fittante said the serving window will provide workers more room to serve product, while the concrete pad will be a more-efficient waiting area for customers.
Moreover, "I believe it will be a much safer area for people to line up for custards," he said. "It will create a buffer between the parking and all the traffic coming in and out."
As to previous concerns about disrupting underground gas or water lines, Fittante said construction crews would only be "scraping the asphalt back," and not digging deep enough to affect what lies beneath.
Trustees approved the Hibbards' proposal contingent on insurance (indemnifying and holding the village harmless), and an easement off Center Street allowing cars to cross the family's property to park in the municipal spots located in front of the sweet shop.
The nearly 80-year-old custard business is located at 105 Portage Road.
•Board members denied a request from Corey McGowan Productions and the Lewiston Council on the Arts to serve beer and wine in Hennepin Park during the popular "Blue Mondays" and "Summer of '69" concert events. Trustees expressed concern about crowd control - namely people wandering off with alcoholic beverages in violation of the open container law - as well as the possible impact of a mobile station and fencing on the park grounds and sidewalks.
McGowan said he organizes similar types of events on a regular basis. He said he and his team could sufficiently prohibit beer and wine from entering or exiting the park.
In years past, McGowan said concert patrons were breaking the law by bringing bottles and cans into the park.
Moreover, McGowan said he splits proceeds with partnering organizations - in this case it would be the LCA - and the donation is significant. At the "Summer of '69" event last year, he said $1,500 was given to the arts council.
Deputy Mayor Bruce Sutherland suggested a one-week trial run. Lewiston Police Chief Frank Previte said he was OK with a roped-off area and signs directing patrons to observe the liquor law.
Still, trustees Nick Conde and Vic Eydt and Mayor Terry Collesano voted "No."
McGowan worked with the LCA on the Taste of Lewiston and Lewiston Art Festival in 2017. He served alcohol at both events, in addition to the "Summer of '69" concert at Hennepin Park.
•Board members approved a municipal code change reflecting notice of defect, while tabling a change that would allow the Lewiston Police Department to ticket, fine and tow automobiles on private property.
The former deals with municipal liability, specifically stating no civil action can be maintained against the village for damages or injuries pertaining to potential safety hazards (such as snow, ice or obstructions) unless notice is first submitted in writing and there is a failure or neglect to act within a reasonable time frame.
The latter gave trustees pause upon apprehensions raised by Previte. He said the LPD is funded by the public, and resources shouldn't be allocated to handle private matters. What's more, he said he doesn't have the manpower to address multiple calls to ticket and tow.
•Trustees accepted the resignation of Historian Pam Hauth.
"I'd like to take the opportunity, Pam, to thank you for all your years of service to the village as a passionate historian," Collesano said. "We appreciate all your hard work, and we're going to miss you."
Applications are now being accepted for the historian position. Those interested can get more information from the clerk's office inside the Red Brick Municipal Building, 145 N. Fourth St.
•The Village Board met before and after their regular monthly meeting to discuss finances. At 5:30 p.m., trustees heard from accountant Pat Brown of Brown & Company on the potential benefits of placing fund balance monies into federal tax-free municipal bonds. He suggested investing between $1 million and $1.2 million of the $1.851 million total into short-term (30 days or less) bonds.
Brown confirmed the clerk's office research, which revealed the municipality could make upward of $20,000 in interest.
Following the board meeting, trustees held a budget meeting with Clerk/Treasurer Amy Salada, Deputy Clerk Edward Walker, Recreation Director Brendan McDermott and Department of Public Works Superintendent Terry Brolinski. Numbers are preliminary but, as of now, the 2018-19 budget is pegged at about $3.56 million, with a flat tax rate of $7.38 per $1,000 of assessed valuation. With revenue projected to be $3.3 million, the municipality would need to allocate about $250,000 in appropriated fund balance to make up the difference.
Under the tax cap threshold, the village could raise taxes 2.13 percent (16 cents per $1,000), which would yield $23,807.
Walker said the past three budgets have called for an appropriated fund balance, but no extra money was actually required, as the actual revenue-to-debt ratio turned out better than projected.
For the next fiscal year, beginning June 1, "There is a strong possibility that, even if we have a horrible winter this coming year (which would increase DPW costs), we may still be at a break-even or even a little less," Walker said.
One tax change residents can expect is an 11-cent increase in the water bill (from $3.54 per 100 cubic feet of water consumed to $3.65). This is to offset added expenses Niagara County has placed on the Village of Lewiston.
Categories
Sentinel Sentinel feature Sentinel HP Feature List