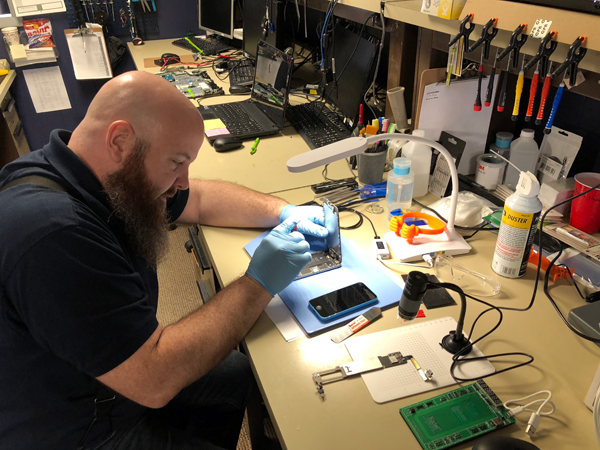 Phone or pad cracked, wet? Bring it to Lewiston e-fix

by jmaloni
Thu, Mar 1st 2018 04:50 pm
Left of Center by Joshua Maloni
You're in a rush to get to the office when, all of a sudden, you drop your new iPhone on the driveway.
In a puddle.
You quickly reach down to swoop it up, apologize to the neighbors for choice colorful words, and run back into the house. Once inside, you place the phone into a stack of rice and hope for the best.
Now you're really late to work. So you grab the phone, flip it on, and pray for a miracle.
Somewhere around lunch, your personal pocket computer-calendar-photo album-jukebox-key to the world starts acting all kinds of janky. Before you know it, the device stops working, more questionable vocabulary choices are made, and this day has just become an epic fail.
Has this happened to you?
Want to know a better way?
Take that wet phone and bring it to Lewiston e-fix - fast!
Co-owner Frank Buccella said rice "does a good job of drying off the outside of the phone, which then gives you a false sense of security in thinking, 'OK, now let me turn it on and see if it works.' Well, the worst thing you can do with a wet piece of electronics is give it power. Now you've got electricity. You've got water - with the impurities - it will conduct electricity to places inside the phone it shouldn't go. You're going to zap components. Corrosion - there's going to be more corrosion. It gets inside the board itself. The board soaks it up. So, all of that water needs to be removed before the device is ever attempted to be powered on."
At Lewiston e-fix, "What we do is we disassemble the entire thing," he explained. "We'll put the logic board and all the parts that are required in a solution that is not harmful to electronics, but displaces the water, in an ultrasonic cleaner. That application pushes out all of the water. Then you remove it from there. And the chemicals that are in there completely evaporate. So, now you're left with a perfectly dry system that you can then apply power to it and hope to have it work."
There is no 100 percent guarantee a wet phone can be fixed, so the store will recover the device's data. If the phone can't be salvaged, at least its contents - your photos, songs, calendars, etc. - can be incorporated into a new phone.
If the phone gets wet after hours, and "if we're not open, seal it. Seal it inside a Ziploc bag. Squeeze out all the air you can," he said.
Turn the phone off, and "Leave it wet. Leave it wet till we're open," he added. "Bring it in to us wet. That's the best chance we have of recovering your (information)."
Professionally drying a cellphone or tablet is one of the new services at Lewiston e-fix.
When Frank and his wife, Stacey, acquired the business in late-2015, "We changed the name, because we intended on supporting phones and tablets sooner rather than later," he said. "Lewiston Computer Services didn't quite cover that. Now we're Lewiston e-fix, which is electronics fix ... computers, phones, tablets."
Should your phone fall on the pavement in nicer weather, cracked screens can also be repaired at Lewiston e-fix. Frank and Stacey said they believe their business is the only one in the River Region to offer such a service.
In addition to the portable devices, Frank fixes Windows-based personal computers.
"Really anything related to phones, tablets or computers," he said. "Software issues, hardware issues. Customers don't always know which of those it is, and that's OK. They come in and they just basically tell me what their computer or their phone or their tablet is doing or not doing that it should be doing. They drop it off, and we diagnose it, troubleshoot it. We do flat-rate labor, so they know up front."
Turnaround time is quick: Most computers and tablets are ready to be reclaimed the next day. Phones can be fixed and ready for pickup the same day.
Lewiston e-fix also has computers available for purchase, (PCs can be custom-made, as well), plus everyday items such as external drives, mice, monitors, keyboards and printers.
"Now that we're doing cellphones, we'll probably carry more accessories for mobile phones," Stacey noted.
Lewiston e-fix is located at 155 Portage Road, across the street from Academy Park. The store is open from 9 a.m. to 5 p.m. Monday through Thursday, and by appointment. For more information, call 716-754-4384 or visit www.lewistonefix.com. 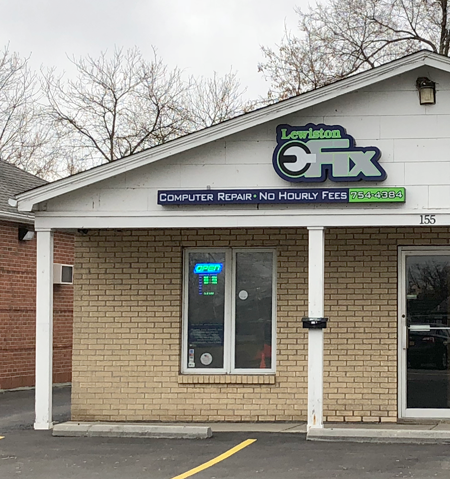 SCAM WARNING
Lewiston e-fix co-owner Frank Buccella said computer scammers are using phony technical support claims to take advantage of residents' personal information.
He warned against taking phone calls or clicking on pop-ups with phone numbers or webpages citing "errors" or viruses with your computer. These scam messengers urge you to call a particular number or click certain keystrokes.
"Once someone has access to your computer, even remotely, every bit of information on it could be compromised," Frank said. "Passwords saved in your browser, tax records, Social Security numbers, pictures, anything in your documents - any of that. And they could be installing key loggers for the future."
"Anything you do with your computer after that is compromised," he added. "If it's been compromised, that's when they have to come to us."
Those who have been victimized by a scam can take their computer to Lewiston e-fix.
"We go through and clean it out. We make the computer resecure, for a fee - but I'd rather it not happen in the first place," Frank said.
When someone contacts you about your electronics, "Make (that person) prove that they're somebody you've done business with before," Frank noted. " 'What's my invoice number?' Something like that."
Report scam artists to the Federal Trade Commission at ftc.gov/complaint. Be sure to include the phone number you were asked to call.
Categories
Business NFP Sentinel Sentinel feature Top News Features