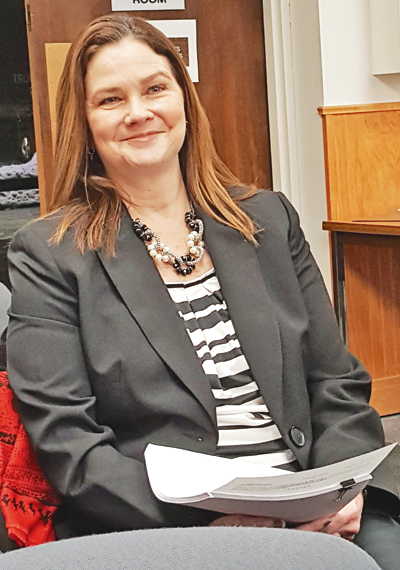 Sat, Feb 17th 2018 07:00 am
By Terry Duffy
Editor-in-Chief
The Lewiston Town Board welcomed a new town official on Monday, with the naming of Jacqueline Agnello as the new finance/budget director.
She succeeds Martha Blazick, who, in January, announced her retirement, effective March 1.
"I know we accepted Marty's resignation at a previous board meeting. Marty and Amy Smith were very influential in helping us find Marty's replacement. I'm happy to say our new finance director is in the audience right now," said Town Supervisor Steve Broderick as he introduced Agnello to visitors.
"I'm very excited about this opportunity and I look forward to working here," she said in her brief remarks.
"Jacquie comes to us from Niagara University and she's looking forward to getting a head start with the town," Broderick continued in making the appointment of Agnello as director of finance. Her appointment was approved unanimously by the board.
"Welcome to my world," said Blazick to the new director.
Agnello will be assuming the position on March 2 at a salary of $61,200 annually.
Broderick also presented for board approval a training contract, budgeted earlier, for an agreement of consulting service covering Blazick, who will remain with the town in the role of a consultant.
"Marty will be training Jacquie for the year and assisting with the budget in making the transition as smooth as possible," said Broderick. He then went on to offer his praise for the retiring director.
"One of the biggest things I've noticed since I have taken office is how important that position is. The entire town is on the back of the finance director. Marty has done an incredible job, and I know how important it is to make that transition. Marty didn't have that transition; Marty went alone and hopefully we'll never have to do that again."
The training contract for Blazick went on to be approved unanimously by the board.
Broderick also announced that junior accountant Tara Johnson had submitted her letter of resignation with the town effective Feb. 22. And Broderick announced that he officially had retired on Jan. 1 as a lieutenant with the Niagara County Sheriff's Office. He will continue to serve as supervisor with the town.
In other news from the session:
•The Town Board set a public hearing for 6 p.m. Monday, March 12, to consider language for creation of a new solar law. Attorney for the town Ryan Parisi submitted resolutions for approval state environmental quality review of the proposed law as well as to designate the town as lead agency.
As discussions continued on setting a hearing date, Councilman John Jacoby Jr. voiced some reservations with respect to some of its provisions governing placement and height of solar panels in the town.
"The idea that we're going to put ground-mounted solar panels in residential (areas) and have a 10-foot overall height. That's a pretty tall height in a residential area."
Jacoby suggested the town in its review of the proposal might want to consider language to "head off" any intentions by homeowners for installations of an over abundance of such structures in neighborhoods.
Parisi said the proposed law does provide for installation of solar farms as well as units in residential properties, and "does touch on some commercial scale as well."
Broderick said the proposed law remains a work in progress, as issues regarding reflection impacts of the installed panels would still need to be considered.
Town Councilman Bill Geiben invited residents to visit the town website, www.townoflewiston.us to examine the proposal in detail and attend the March 12 public hearing to provide input on any concerns they may have.
•Town Board members reviewed an amended map plan submitted by housing developer Forbes Copretto covering one lot connecting the French Landing and River Walk subdivisions that had been referred by the town Planning Board.
William W. Tuyn, vice president of Development and Diversification for Forbes Copretto, requested the town allow for a one-lot green space area connecting River Walk to become a new lot in the French Landing subdivision. Issues such as zoning and a drainage easement needed to be addressed, as well as a provision sought by Forbes Copretto for an amended date for sidewalks to be installed prior to any town issuance of certificates of occupancy for houses in the French Landing subdivision.
In seeking a change from a previously agreed Oct. 31, 2019, completion date for sidewalk installations to 2020, Tuyn said the date restriction placed an unfair burden on the developer to complete them prior to any issuance of COOs for the new homes. "This means a lot," said Tuyn, noting that the developer has only sold three homes thus far, and it still has 28 lots still to address and completing them in the current timeframe would be difficult.
Attorney Parisi said he could not recommend approval of the measure without sidewalk completions. However, Councilman Al Bax suggested the town could provide for a "soft condition" covering dates of the completed sidewalks, to enable the developer to proceed with the home completions and COOs on a modified basis.
After some discussion the board went on to unanimously approve the Forbes' requests for the amended map with River Walk and French Landing, as well as approvals covering any adverse environmental impacts, drainage easements, and for the lot to become part of the drainage district for French Landing.
•Wrapping up, the board announced the Niagara County Department of Health would be holding a rabies vaccination clinic, from 9-11 a.m. Saturday, July 28, at the Town of Lewiston Highway Garage on Swann Road.
•The board approved a mission statement submitted by Town Highway Superintendent Dave Trane covering Lewiston Town Highway Department services to residents. It reads as follows: "The Town of Lewiston Highway Department is dedicated to providing safe, courteous, dependable service, wherever and whenever possible, for all our residents."
For more on the Lewiston Highway Department, visit its "Winter Safety Gram," found on the town website, www.townoflewiston.us.
Categories
NFP Sentinel Sentinel HP Feature List