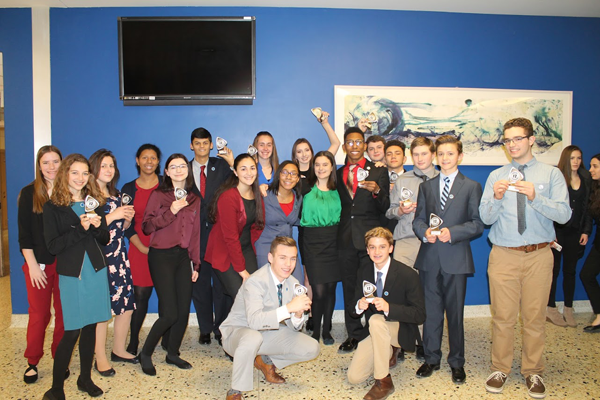 Lewiston-Porter High School students who competed in the DECA Regionals at Grand Island High School gather for a group photo after the award ceremony. Some of the students show the trophies they won at the competition, which tested students on business and marketing knowledge and communication skills. Winners will advance to statewide competition in Rochester in March.

Sat, Jan 13th 2018 07:00 am
By Larry Austin
More than 500 students from 13 schools in Western New York passed up watching the Buffalo Bills playoff game Sunday and took part in a competition of their own.
DECA Regionals, a competition for students in business and marketing events, took place at Grand Island High School with top-ranked students qualifying for DECA States competition in Rochester in March.
Senior Jess Faso, Grand Island High School DECA's regional representative, presided over the proceedings as Region 12 president.
"At first it was very hectic," Faso said of Regionals, which began bright and early in the morning and concluded with presentation of trophies at about 2 p.m. in a filled high school auditorium. "But after we got everything together, I think the competition went really smoothly."
Anticipation was building after the trophies were set up on the auditorium stage, she said, as students "all saw their opportunity to go to states," Faso said. She called competitors "pretty excited little entrepreneurs."
Among the hundreds of students was a contingent of 25 from Lewiston-Porter, many of them freshmen, brought by L-P business teacher and DECA advisor Nicole Alonzo.
"This is a building year for us. Last year I had a lot of my students graduate from high school and I thought it'd be nice having a small group this year, but then all these freshmen joined up," Alonzo said.
Alonzo said the L-P DECA club meets after school at least three days a week for about an hour, during which they practice the rules for competition, take practice tests from old exams from previous competitions, and practice role-play situations. Competition Sunday involved a role-play situations before a panel of judges.
"So it's a building year for them, with a lot of training to get them ready since they've never done it before. But it' a great learning experience for them and if they stick with it, they've got another three years to go," Alonzo said.
Anxiety was high, especially for first-time competitors, Faso said.
"I remember when it was my first time competing, I was super-nervous and everything, but once it's done you, just hang out with your friends and just relax," Faso said. "The anticipation is definitely there."
Faso said the top seven competitors in solo events and the top five in team events advanced to states. To prepare for states, Faso said students will study up on the performance indicators and work to improve their public speaking.
"It's definitely a learning curve for our newbies especially," Alonzo said.
Categories
Sentinel Sentinel feature