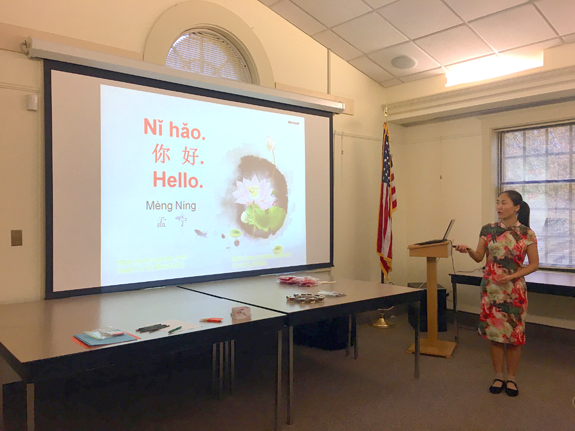 Ning Meng, Chinese guest instructor at Lewiston-Porter, is shown at a recent presentation at the Lewiston Public Library. (Photos by Malika-Budur Kalila)

Sat, Nov 11th 2017 07:00 am
By Malika-Budur Kalila
On Saturday, Oct. 28, Ning Meng, a Chinese guest teacher for the Lewiston-Porter School District, provided a presentation about her homeland, China, from a native's perspective. The event, held in the Lewiston Public Library, drew students from Lewiston-Porter as well as local residents.
Meng began the presentation by introducing traditional values of China and the country's role in world history. However, she said that knowing China only for "inventing papers" is not enough. In order to truly know about the country, she encouraged the audience to focus on today's China.
"In fact we need to learn more about today's China, not about the traditional one," she said.
Meng made note of her country's technological improvements while showing pictures of the new electric cars and high-speed trains. She also told visitors that, each year, different application programs appear on the internet in China and most of them are free to public, since citizens do not usually pay for such kind of services.
Moreover, she compared the internet service prices between the U.S. and China. She said that, in China, citizens pay around $40 per year, while, in the U.S., similar amount is paid for a monthly usage.
During her presentation, Meng introduced WeChat, a messaging and calling application, which has more than 400 million users in China. She said the Chinese people use that application not only for calling purposes, but for booking tickets, ordering a meal, reading news and professional articles, renting transportation, etc. She said citizens of different ages use that application and find the WeChat app to be very useful.
"My mom is 72 years old and she also has a WeChat account," Meng said.
Meng discussed the education system of China. She said that, due to high population, the government encourages students to attend vocational schools instead of attending a university. She said vocational schools are free to the citizens, as the government wants students to earn skills for life without having to attend a university.
In her discussion, Meng also provided visitors differences between her hometown and the local area.
She noted, for example, streets are usually very crowded in China, and citizens often hang out during the night hours, too.
"At the beginning, I felt scared; no voice, too quiet. ... But now I am used to it," she said of her reflections of life in northern Niagara. "Here, I see a lot of people in libraries. In China, libraries do not have a lot of activities, just little students go to the library. If I go back to China, I want to do some senior libraries, to help people to read more."
Meng has been teaching at the Lewiston-Porter Central School District since the beginning of the 2016-17 school year. She is a representative of the University at Buffalo's Confucius Institute program, which provides Chinese language and cultural teaching at local K-12 schools. Meng teaches more than 20 students on weekdays.
"I think they practice a lot and do their homework very well," she said. "Our class is effective."
Categories
NUsUnlimited School feature Sentinel