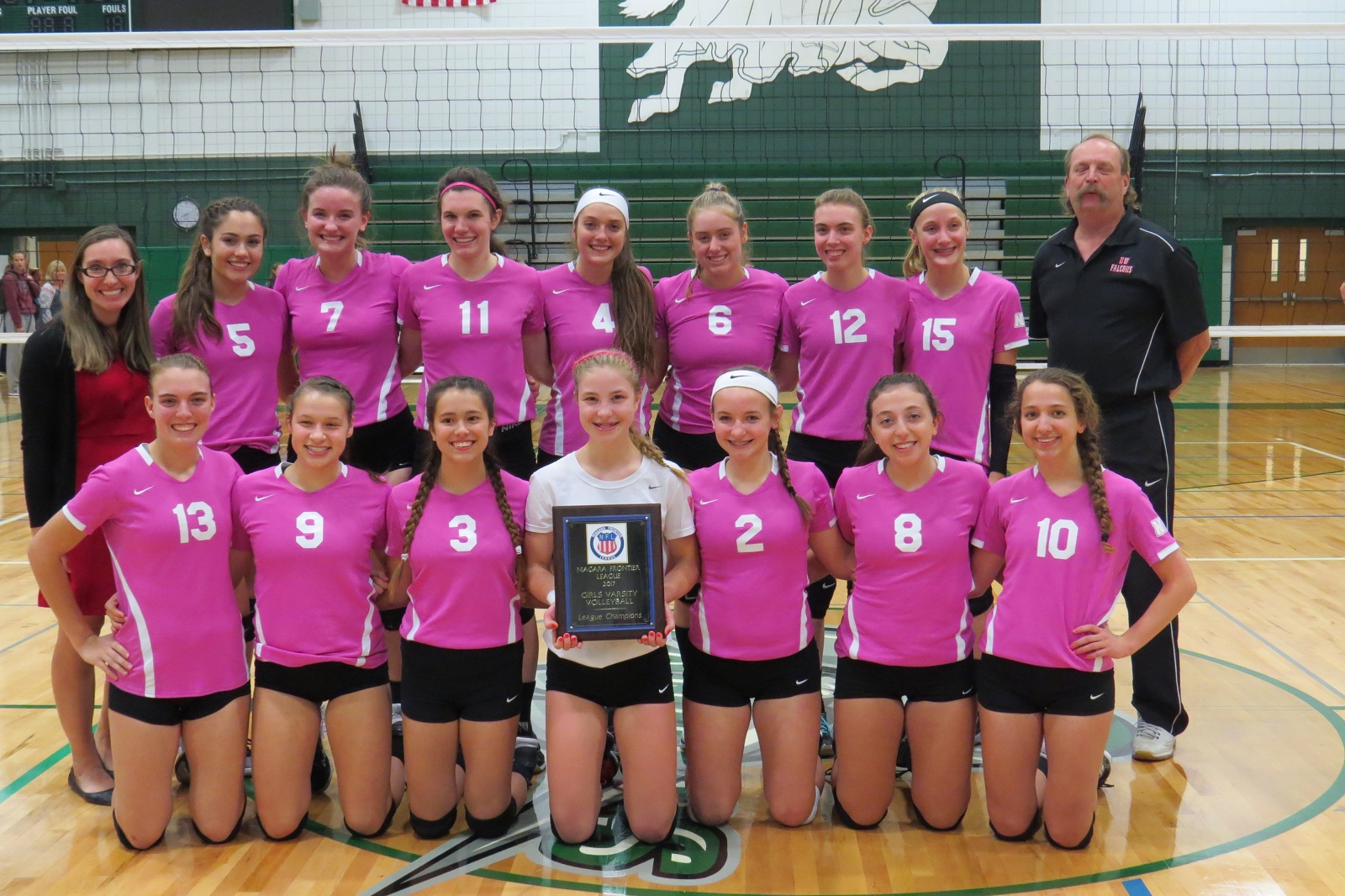 Fri, Oct 20th 2017 10:40 pm
Falcons claim the Niagara Frontier League title over Grand Island
By David Yarger
Tribune Editor
In 13 seasons as head coach of the Niagara-Wheatfield girls volleyball team, Brandi Cochran hoped that one day her team would raise a Niagara Frontier League title. The dream became reality on Friday night, as the Falcons' defeated Grand Island, 3-0, in the NFL Championship game.
Cochran's squad of eight juniors, four seniors and a ninth- and eighth-grader came through in the clutch, winning each set, 28-26, 25-23 and 24-12, respectively. Cochran couldn't hold back her excitement.
"I'm so happy for the girls," she said. "I told them in the beginning of the year they have a special team. We've been kind of battling injuries and a lot of different things and they found a way to come out and push through at the end."
Junior captain Jenna Sonnenberg, like Cochran, was also joyous and happy to bring a title to Niagara-Wheatfield.
"It feels amazing. I've been on the team for the past four years and we've never made it this far, so it feels amazing to finally get the win. I know our coach, she's been waiting a long time for it," Sonnenberg said.
Talking about the roster, Cochran said some of the players have come a long way to where they are now.
"I've had some of these girls since eighth-grade and ninth-grade, so they were like my young, developing group, and now my young developing group is my juniors. The lucky thing is that I have some young girls. My eighth- and ninth-grader are role players on the court. Every single girl on this roster, regardless of their grade, finds a way to contribute to the team.
"They have their chemistry, they know the game and they have their ups and downs, every team is going to, but they just find a way to push through. Tonight, they did it, so it was great," Cochran said.
Sonnenberg noted the youth of the team and said it's comforting knowing who you're playing with and how it'll help down the road.
"It's a great experience knowing that a lot of the girls on the court next to you will be there next year and the year after and keep making the program amazing year after year. So, we have a great future for our program," she said.
N-W did have their hands full with Grand Island. The first two sets were nail-biting, down to the wire finishes that the Falcons were able to squeak out.
In the first set, it was back and forth for majority of the match. The Falcons reached game point, but Grand Island rallied back to tie it at 24. From there, the Vikings took the lead by one, twice, but couldn't finish. N-W took a 27-26 lead and then a Danielle Brochey spike hit the back line to end it.
Grand Island came out firing in the second set, holding a 14-7 lead at one point. Down 20-15, the Falcons embarked on a 10-3 scoring run to close the second set with another win.
In the third set, the Falcons kept the foot on the gas and never looked back. Sonnenberg served a ball that was misplayed by the Vikings, and Wheatfield took the championship-winning set, 25-12. Sonnenberg finished with 22 digs and two aces, while Mackenzie Franks had 35 assists and 13 digs. Brochey added 10 kills and 15 digs.
Cochran was proud of her team's ability to fight, especially coming off a surprising loss to Lockport during the week.
"We had a tough loss that we weren't expecting, but tonight I think they learned from that," she said. "A big part of our pregame talk today was to stay positive and to, no matter what the score was, how we were playing or the other team was playing, stay together as a team and every point fight for that one and then forget about it and move to the next one. I think they really actually did it this time."
Cochran said her team has been known to let teams back into games, but said tonight her team just didn't want to lose this big match.
Sonnenberg said the pregame speech Cochran mentioned played a big role in the win.
"We had a talk before the game how team unity would keep us together and keep us going, even when we were down. So, that definitely helped us pick each other up and we always knew that if we lost a point we'd get it right back after," Sonnenberg said.
The Falcons will head to the Section VI playoffs after losing just one league match all season. Their next opponent is still to be determined.
Categories
School School feature Sports Sports feature Tribune Tribune feature Tribune HP Feature Picture