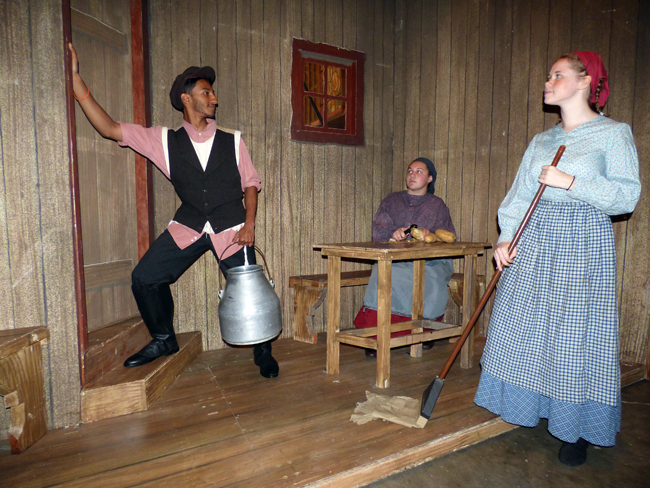 Youth take center stage in Artpark's production of 'Fiddler on the Roof Jr.'

by jmaloni
Thu, Aug 3rd 2017 11:00 pm
Unique summer camp/theater academy experience culminates in Mainstage Theater showcase
Preview by Joshua Maloni
Managing Editor
Over the past 40-plus years, some of the world's top entertainers have performed in the Artpark Mainstage Theater. Sting, Bob Dylan, Buddy Guy, Sarah McLachlan, Gordon Downie and the Tragically Hip, Hayley Podschun and Emilie Renier are just some of the talented artists who have graced the stage in recent years.
This weekend, a new type of performer will take the spotlight:
One who's untrained.
Unknown.
Unable to drive a car, vote or buy beer.
At 1 p.m. Sunday, children and teenagers will headline a performance of "Fiddler on the Roof Jr." Their showcase - a full-on, full-scale theater performance, with real sets and costumes - is the culmination of a theater academy that began July 10.
Paschal Frisina III directed the camp and is helming the show. He said the idea to stage a student show came about last fall. At that time, he and choreographer Toni Dentico began to have conversations with Artpark & Company Executive Director Sonia Clark.
"They were looking to do something with kids over the summer, because their schedule is really busy with concert season," Dentico said. "Paschal and I had done camp here - weeklong camps - the last six or seven years. They knew that we had kind of a following, because we both work together at St. Joseph's Collegiate, and wondered if we could come back and maybe expand upon the idea that we started. So we were thrilled, because we wanted to make the summer camp actually into a show, rather than just it ends up being a review, and you only have a week with the kids.
"We thought, 'Wow, we have four weeks. We can really do something here.' And then the ball started rolling."
Frisina said, "We went back and forth on ideas of what shows would actually attract students. And we landed on 'Fiddler on the Roof,' because of the 'Fiddler' community feel, where everyone sort of gets to be a part of Anatevka, which is the community we're trying to replicate."
Clark agreed to the idea, and efforts began to obtain funding. With community donations at the Artpark Gala, and contributions from Pamela and Joseph Priest and the Charles D. and Mary A. Bauer Foundation, monies were secured for a reimagined theater academy. 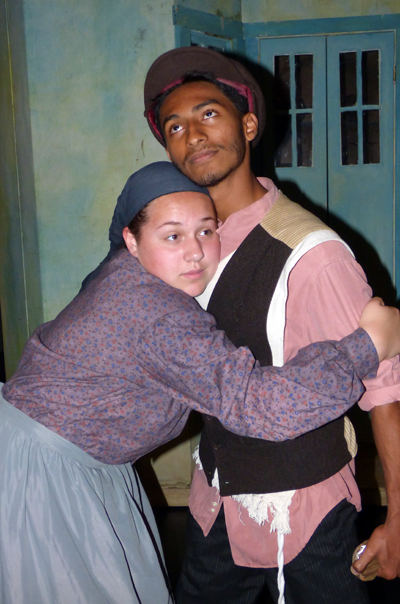 Annabella Bogart, 15, of Amherst, and Richard Manuel, 16, of Buffalo, are two of the stars of the Artpark Theater Academy's production of "Fiddler on the Roof Jr."
Artpark & Company vigorously promoted the camp over the winter and spring months, and area children and teens steadily signed on board.
The next step was to teach and train the underage performers, many of whom had no prior acting, dance or vocal training.
"We took four weeks, and you break it down into sessions and into days," Frisina said. "So, each day replicates the same process. In the morning, we would have them have workshops. Different mediums of theater arts, from dance training to acting training to vocal training to mimes coming in from New York; an array of professional talent giving them workshops specific to theater arts. It's nothing to do with the show. Then they have lunch. And then in the afternoon they have rehearsal all afternoon, just like as if they were in their afterschool musical program.
"And we could cast the roles, audition them, callbacks. The entire process of the normal, professional production."
Frisina explained, "Instead of showing them in a classroom, 'This is the first thing you do in a theater show,' we just said, 'We're going to do a show. And this is what you do,' and we just started doing it from the beginning. And now we're at the point when they can actually do the show, which is just amazing."
Dentico added, "Once we had them audition and in their roles, it's amazing how fast they take it on and become serious about the end results. It's been actually a really neat experience to watch. Lots of kids who don't have much theater experience really take a role and become their character, and become leaders within the group."
Of course, the theater academy was a camp and, accordingly, the curriculum included such activities as a water balloon fight, tours of Lewiston and even a meal prepared by "Chopped" judge and "Iron Chef" Geoffrey Zakarian.
In the process, "It kind of snuck up on them, and all of a sudden here we have a show," Dentico said.
"And now they're totally invested in it and ready to go," Frisina said. "They got to put on their costumes yesterday, and it was like this incredible experience for them to all of a sudden get that chance to do that."
In the seasons preceding Clark's 2015 arrival at Artpark & Company, one grandiose Broadway musical was orchestrated each summer in the Mainstage Theater. Shows included "Aida," "Beauty and the Beast," "The Sound of Music," "Mary Poppins" and "Peter Pan."
There was no show last summer, and Clark admitted that didn't sit well with the community. In planning something for 2017, she opted to take a different approach.
"The main benefit is for the kids," Clark said. "I think it will be really great for the community to see their hard work. I think they're amazing kids. I was really blown away by the quality of some of them - especially the older ones. So, I think it's going to be a really great show with really great backup from professional stagehands and designers and the team behind it all. I think (the community will) see something of really high, good quality." 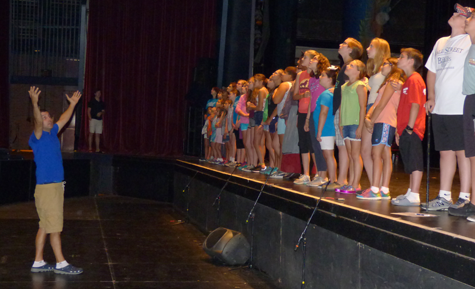 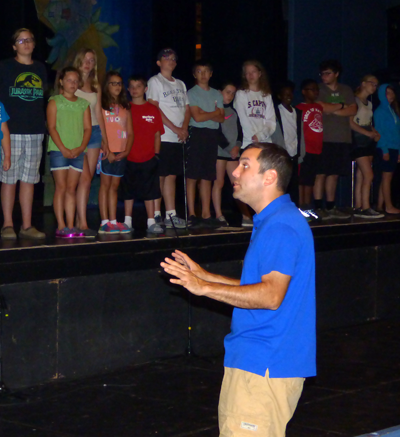 Whether 10, 100 or 1,000 people attend, Clark said Artpark & Company views the camp experience as a success.
Dentico agreed. She said theater academy participants are bound to benefit from their involvement.
"We're working with sets that are big and live and moving," Dentico said. "I don't see how it couldn't impact them hugely, in one way or another."
"I'm hopeful that they see that the set is so interactive, when normally only professionals get to touch something like that," Frisina said. "That's what's really remarkable about the program that was created."
He added, "We want this to be a student professional production. Not just a student production. It's really important for them to know that difference."
Clark said, "I think it's extraordinary, this opportunity. Not just being on stage, I think what's even probably bigger is all the professionals they had to work with. The guest artists and the staff. We've had people come from Broadway stagings of 'Fiddler' to work with them and talk with them. We had one of the top mimes in the country, who brought Marcel Marceau to the U.S., work with them on their physical skills on stage. We have a Russian director now with amazing drama background working on scenes with them. Jon Lehrer came to work with them on choreography.
"I don't know another camp that has kids exposed to this kind of attention, and firsthand kind of experience with real-deal professionals. And, yeah, being on a stage of that size, I think will give them a lot of confidence. Confidence, for an actor, is very, very important."
Richard Manuel, 16, of Buffalo, portrays Tevye. He said, "This is kind of like a once-in-a-lifetime experience for me, because I don't think I'll be able to play the lead again in such a big production in such a short amount of time. I'm really thankful for Paschal, Toni and everyone involved to let me be in this experience."
He added, "It's so much fun. I really didn't think I would spend my summer this way. Not only is the work fulfilling, (but) at the end of the day you're like, 'Wow; I had fun. I made a closer friendship with another person. And I'm moving the show along, and I'm making the directors proud.' ... And just given the opportunity to meet the Broadway people ... I'm just thankful for that."
Annabella Bogart, 15, of Amherst, plays Golde. She said, "It means definitely a lot, because I feel like we're given so much by the community. It feels amazing to give it back with a performance that, maybe just for an hour or an hour-and-a-half, we can make people happy. I think that that's really important. The arts are so important, because they do that to people."
Frisina and Dentico said they hope Artpark & Company will continue the upgraded theater academy program next summer.
"There's already 50 kids that want to do it again," Frisina said. "Plus all of the kids that have seen it on social media, going, 'How come we didn't do this?' "
"We've definitely had kids coming up to me ... 'What show are we doing next year?' I'm like, 'Well, we don't know yet (laughs)!' " Dentico said.

Artpark Theater Academy presents 'Fiddler on the Roof Jr.' this Sunday
Artpark Theater Academy students are embracing "Tradition!" with their Mainstage Theater production of "Fiddler on the Roof Jr." The show will be staged at 1 p.m. Sunday, Aug. 6, at the Lewiston performing and visual arts venue, 450 S. Fourth St.
The professional production features a full set and is the culmination of the four-week intensive "Broadway Jr." program. It was designed and rehearsed, and will be entirely performed by more than 50 Theater Academy students (ages 8-17).
Tickets are $10 and are available for purchase online at www.tickets.com or www.artpark.net; by phone at 1-888-223-6000; in person at the Artpark box office, or at the Mainstage Theater entrance gate on Sunday.
The Artpark Theater Academy is directed by Paschal Frisina III and features a staff of some of the top theater teachers in the industry. Additionally, it boasted a number of special guest instructors, including guest acting coach Oleg Kheyfets, theater designer Tatyana Wilds, LehrerDance founder Jon Lehrer, mime workshop with Gregg Goldston, actor Phil Wackerfuss, and "Fiddler on the Roof" Broadway revival cast alums Mitchell Jarvis and Samantha Massell.
"Fiddler on the Roof Jr." is a student version of the musical "Fiddler on the Roof," which means some songs and scenes are truncated. The show features music by Jerry Bock, a book by Joseph Stein and lyrics by Sheldon Harnick. It is based on Sholem Aleichem's stories.
Recognized as one of great American musicals, the original "Fiddler on the Roof" won the New York Drama Critics Circle Award, nine Tony awards and a special Tony in 1972 for its unique contribution to Broadway.
The musical tells the story of a poor dairyman, Tevye, who, in the little village of Anatevka, tries to instill in his five daughters the traditions of his tightly knit Jewish community in the face of changing social mores and the growing anti-Semitism of Czarist Russia.  The traditions of Tevye's ancestors are shattered as his daughters assert their independence, and government troops brutally force him and his fellow villagers from their homes.  The curtain falls on Tevye's uplifting determination to create another life in the New World.
"Fiddler on the Roof Jr." is presented through special arrangement with Music Theatre International.