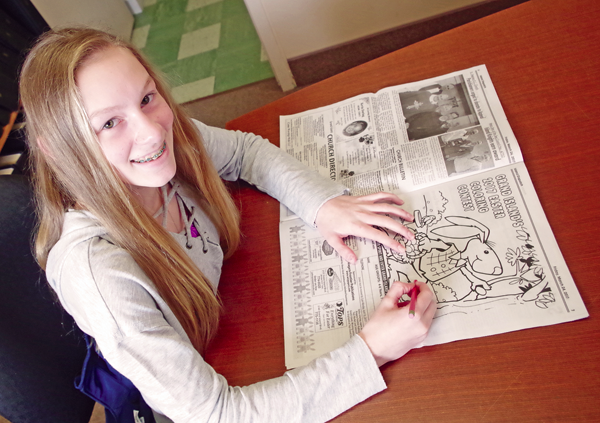 Ask the expert: How to win the Island Dispatch Easter Coloring Contest

Anna Bartlo knows a thing or two - or five - about winning an Island Dispatch Coloring Contest.

The good news for Island artists is that Bartlo is now too old to take part in the new Easter Coloring Contest, which hit the newsstand and has a top age group of 10-12 years old. Even better news: she's willing to share her tips on how to make your best coloring contest entry.

What's her secret? Well, it's nothing any other kid can't do. In fact, Anna's mother, Pam, doesn't even consider her daughter an artistic prodigy. It's more a matter of planning and effort than talent.

First, go through more than one drawing. Last week's Dispatch and this week's Grand Island PennySaver had the newest Easter coloring contest entry form. More forms are available at Tops, one of three contest sponsors along with Kelly's Country Store and John's Pizza & Subs.

"Usually, I'd use the one in the paper as like my sketch draft, and then I'd get the ones from Tops and do my final copy. I'd plan it out," she said.

Second, to set your entry apart, think outside the lines, she said, and put the extra work into it.

"Usually I try to think of other things that have to do with Easter or Christmas, and I just add them into the background," she said.

It doesn't guarantee a win. One of her best drawings, in which she turned the bottom of the drawing into a giant Easter basket, didn't take a prize.

Third, learn from your peers. Both Anna and her brother Eric check out the other winning entries that hang in Tops after the contest.

"She won fourth place in the lowest age category because she colored it nicely," Pam Bartlo remembers. "And we got to Tops and looked at all those pictures, all creative, and we said, 'Look at theirs and see what you have to do if you want to keep winning.' And it did inspire them both, and they told other friends."

Bartlo said she was in the youngest age group when she first entered an Island Dispatch coloring contest.

"I just saw it in the paper and I wanted to try and win," she said. She had her eye on top prize that year. "I wanted the Fantasy Island pass."

"It felt pretty great" to win the first time, when she was in the 4-6 age group. She still has the stuffed animal from Kelly's Country Store that she got for winning.

She highly recommends taking part in the contest. "It's fun to create a picture about the holiday, and there's some pretty cool stuff that you could win too."

Last, but not least, thank the people who make the contest what it is. Pam Bartlo appreciates the sponsors who support the contest twice a year.

"I just think it's a great thing for the kids. I always said that every time. We appreciate it so much because they get excited about it," she said.