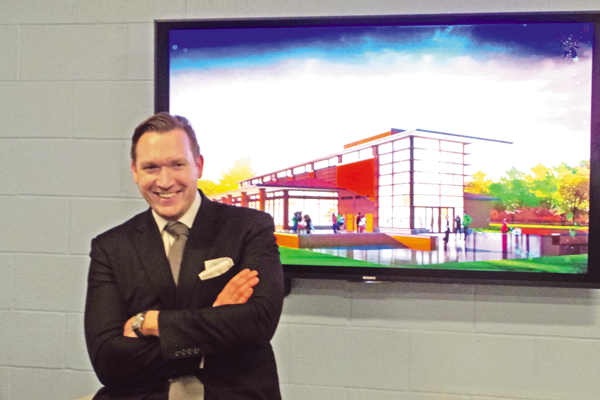 Town Supervisor Nathan McMurray is pictured in front of a diagram of a proposed welcome center to be located on Grand Island. (Photo by Alice E. Gerard)

The future Western New York Welcome Center, one of 10 welcome centers that are to be built in all regions of New York state at a cost of $55 million, will place Grand Island in the center of Western New York tourism.

"This is not a rest stop," said Town Supervisor Nathan McMurray. "This is a gateway that will introduce visitors to Western New York, Grand Island, and the Niagara Falls region. It is going to be a virtual museum, as well as spotlight goods from local farmers. It will have artifacts from both Grand Island and Western New York history. We are the host community for the welcome center for five counties."

There may, however, be some bumps on the road. One is the I-190, which needs to be upgraded. "We are looking at the off and on ramps of the Whitehaven exit. They are not good," McMurray said. Another issue is a federal law that McMurray called the "Route 66 law." According to the Federal Highway Administration's website, this law prohibits the states from commercializing the right-of-way along the interstate system. It was enacted because, when the system of interstate roads was built in the 1950s and 1960s, the unintended side-effect was that the roads "killed the local little shops and vendors." All over-the-counter sales of food and other items at rest stops and other places are prohibited. The law is meant "to encourage people to get off of the road, " McMurray said. The Surface Transportation Assistance Act of 1982 modified the commercial restriction by permitting vending machines in rest and recreation areas constructed or located on the Interstate right-of-way.

The law, McMurray said, "has been ignored because people wouldn't get off the road anyway."

The 15,200-square-foot Long Island Welcome Center, which McMurray visited, is "more a museum than anything that would compete with local commerce. It blew my mind. You can buy local cheeses, local meat, local everything. They sell shoes and wine." Other features include a digital kiosk, a selfie wall, and an "I Love NY" shop, where local farming products and honey are sold. The theme is whales.

"The center in Grand Island will be designed to celebrate all of the Western New York region," McMurray said. "I want goods from the farmers market in Grand Island in our welcome center. This will be directly connected to local attractions, not in a way that manipulates and feels cheap. It is showing neat things that exist, such as kayak rentals on Grand Island. The center will direct people toward local economies. They will build around the theme that represents the host community. There will be outdoor seating, and a playground area. There will be a walk of fame, honoring outstanding Western New Yorkers, such as Tim Russert and Lucille Ball, and others who grew up in Wyoming, Erie, Niagara, Genesee, and Cattaraugus counties."

Local history will also be featured at the welcome center. "The planning team is working with a team of historians on Western New York history," McMurray said. In addition, the design of the welcome center is based on the work of Frank Lloyd Wright.

"We can have a market with local products, artifacts, and items celebrating Western New York and Grand Island, as well as interactive digital displays and kiosks directly connecting people to local attractions. Outside there will be a playground. There may or may not be buffalos. There will be no gas station or fast food chains. It is high end," McMurray said.

McMurray described how the town worked to reach the point at which the governor made the announcement that the welcome center would be in Grand Island. "We heard rumbling that the governor had done one in Long Island. We asked the governor's office to talk to us and said that we really want to have a Western New York Welcome Center on Grand Island. Then we brought in Eric Fiebelkorn, president of the Grand Island Chamber of Commerce. He was super supportive, and he helped make the case. The governor loved it, and he wanted to do it on Grand Island. When the governor came to UB to make a speech, he had pictures of it. We thought that it would happen in five years, but he said that it would happen in 2018. Now we've had subsequent discussions with the governor's team, and they are well on their way to developing this thing."

"Approximately 60,000 cars go over Grand Island every day. Millions of people go to Niagara Falls every year. They are not driving down Grand Island Boulevard. They are going over the bridges. This could get people to get off the road. We would like to have connections with the West River Connector Trail. We want people to be able to walk and bike to this center. Western New York is a welcoming area. This is a tourist destination," McMurray said.

Kinney said that having the welcome center on Grand Island spotlights a future for Grand Island as an eco-tourism destination. "There's lots of exciting stuff and exciting ideas and movement. The Economic Development and the Conservation advisory boards are both excited."

"I am excited. Buffalo is starting to turn the corner," McMurray said. "People are now proud of being from here. Opportunities to tell our story will increase that pride. Grand Island, this will be a building that will immediately have a positive impact on your property values, the image of the Island, and on our reputation. People who are working on this are cultured people who have a deep sophisticated understand of architecture and design and history."

McMurray added, "We need to celebrate something that is a natural fit. We could do low-impact tourism. We could turn to a green, family-friendly, eco-friendly, recreation friendly future for Grand Island."