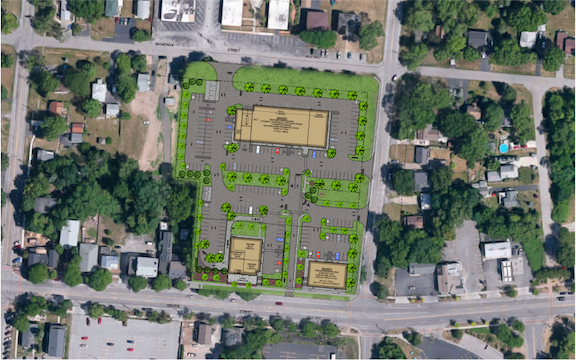 This file photo is a Carmina Wood Morris PC artist's past rendering of the proposed Ellicott Development plaza.

The wait is over.

The Village of Lewiston Board of Trustees on Monday approved Ellicott Development's site plan, a proposal to build a 4.1-acre, multimillion-dollar mixed-use plaza on the corner of Center, North Eighth and Onondaga streets. Trustee Dan Gibson was the lone dissenting vote.

Four years after his company acquired the property - and after more than three years of meetings, public input and negotiations with the village's respective boards, Ellicott Development CEO William Paladino said, "I'm happy to have them say 'Yes.' It's been a long process, and a lot of time and effort spent, and a lot of discussions with many people regarding what's right and what's wrong on this corner."

Site work could begin as early as January, with the possibility some portion of the plaza could be opened to the public by the end of 2017.

At the monthly board meeting, Mayor Terry Collesano said he believes the project will be an asset to the village. Deputy Mayor Bruce Sutherland said the plaza would improve upon an already growing corner of the retail district.

In August of 2013, the public received its first look at potential development plans. Following a board meeting, Collesano said, "Overall, I think my feeling - I can't speak for the rest of (the board) - but in just general conversations, I think everyone is in agreeance it would be a great development - provided there's a few of the obstacles that can be overcome, which I'm sure they can."

Those hurdles, of course, would be jumped, but little did Collesano know that it would take years, and not months, before trustees would be comfortable enough to cast a final vote.

The plaza project would be the subject of numerous public meetings - some led by residents and business owners concerned the development would detract from the village's historic nature, or bankrupt locally owned establishments. Both the Planning Commission and Zoning Board of Appeals routinely asked Ellicott Development representatives to modify the plan.

Deliberations with residents and neighbors centered on motorists - where they would park, and how they would enter and exit the plaza; firefighting capabilities; usages - tenants have not been identified, but fast-food chains have been discussed; the size of the buildings and how they would appear to those walking along Center Street; and the topography of a project that steeply slopes downhill from Center Street to Onondaga street.

Paladino, for whom residents nicknamed the plaza, said, "We think we've gone over and above what normally would happen in this process. We're well beyond what normally we see in these towns and municipalities that we do work in. But, we appreciate the opinions and the passion from some of the residents here, in terms of their village, and maintaining the quaintness of their village. We hope, and I think, at the end of the day, people will be very happy with the project that we complete."

Paladino said, "We'd like to start, in the next probably 60 days, at least clearing the site and getting the contamination issue (resolved). Hopefully when the snow clears, starting actual construction."

This past October, he said buildings No. 2 and 3 would be constructed first, and "We'd have something done within one year." 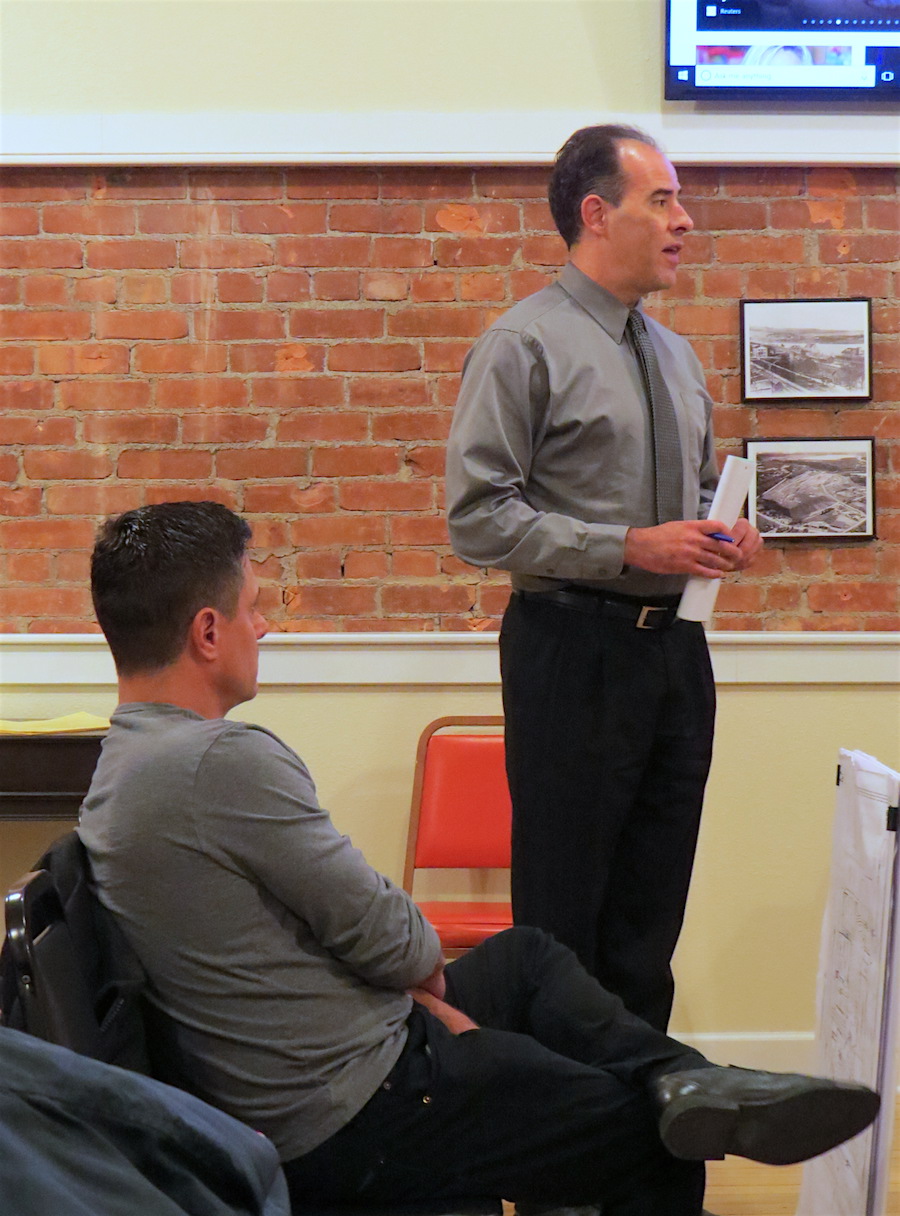 As recently as February, plaza meetings had to be held in the Red Brick Municipal Building gymnasium, as residents flooded in to discuss the project's merits.

However, upon the ZBA's granting of eight variances in late July, many residents said  plaza approval was "a done deal."

As trustees gathered to render a final decision this week, the Morgan Lewis Municipal Boardroom was less than half full.

A handful of residents spoke, with half speaking in favor of the plaza, and half advocating for trustees to deny the project.

Page Avenue resident Peter Diachun said the plaza was opposed by many residents, and not in the village's best interest.

David Fontanarosa of Seneca Street said the plaza plan was sound, and agreed it would improve the corner. He said he would love to take his children to McDonald's while he ate at The Brickyard Pub & B.B.Q.

Both those speaking for and against the plaza asked about the final Lewiston No. 1 Volunteer Fire Co. firefighting assessment. Director Barry Beebe said, "Yes, we can get in there," to fight fires, but "We're going to block (motorists) in."

When Collesano asked point-blank "Does it meet the (state fire) code? ... It's a 'Yes' or 'No' answer," Beebe paused and responded, "I believe it meets the code right now."

Ellicott Development counsel Sean Hopkins, of Buffalo's Hopkins, Sorgi & Romanowski, said each of the plaza's three buildings would have full sprinkler systems, and he noted Paladino agreed to install an additional fire hydrant at the center of the plaza.

Planning Commission Chairman Norm Machelor said his board had successfully convinced Paladino to make concessions, including reducing the north building (No. 3) from three stories to two, lessening the Center Street setback, and adding a sidewalk, gazebo and fencing.

In light of these changes - and one new one requested Monday: extending the sidewalk along Onondaga Street - Paladino smiled when asked if he was pleased with the final site plan.

Paladino explained, "We don't have any tenants presently. We have to work on obtaining tenants. We finally at least have a product now we can present to people and market to people. We have a lot of costs we still have to go over, and a lot of extra costs which have been placed on this project that we'll continue to fight through, and see what the final costs are for this project. And then, hopefully, be within our budgets and we'll be able to proceed forward."

He added, "We're happy with what we have. We want to now find a nice product mix for this plaza, and hopefully the retail environment will step up a little bit and want to occupy this project. And at the end of the day, we'll have a nice mix of tenants and services for the residents."

Prior to voting "Yes," Collesano said, "The time has finally arrived where I believe your questions and concerns have been addressed to the best of our abilities. ... Lewiston has continued to grow over the years. We have faced many challenges, but the new projects haven't changed our way of life. ... We will objectively continue to listen to your concerns and govern to the best of our abilities in order to promote a better community in which to live."

Former four-term Mayor Richard Soluri was unable to attend the meeting, but submitted a letter wherein he said approving the plaza would open important doors for the village in the future.

After the meeting, Gibson said he voted against the project because he remains concerned about the number of parking spaces. Per village code, the plaza should have 262 parking spaces. It's 74 short, but the ZBA gave Ellicott Development a variance. ZBA members said other plaza parking lots are rarely full.

Gibson also said the development is too dense.

Paladino said, "Density is not going to be an issue here."

He noted, "I think we're at 20-25 percent of the total site. Most of the buildings in Lewiston occupy over 80-90 percent of their lots."

Paladino said the project was initially pegged at around $14 million.

"It's probably less than that - probably closer to $12 (million) now that we did take a whole story off (building No. 3)," he said. "We have made some of the other buildings smaller. We started with a larger project." 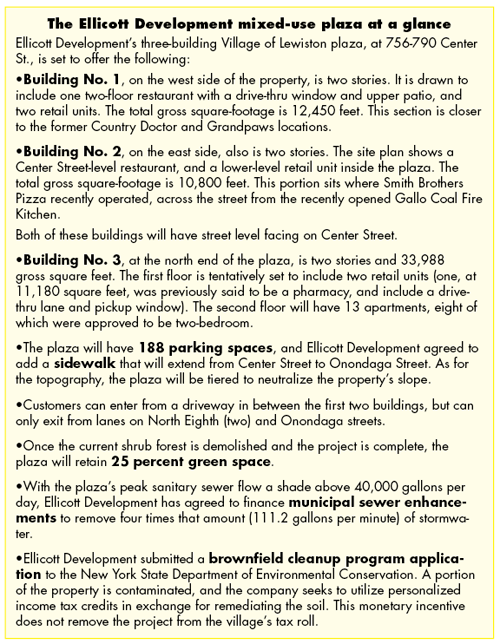