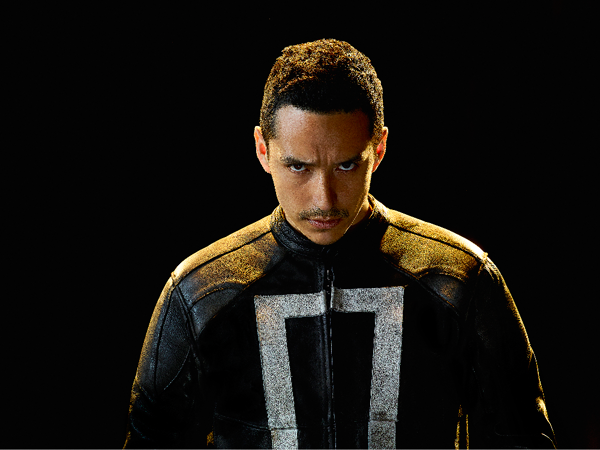 Since its debut in September 2013, "Marvel's Agents of S.H.I.EL.D." has been a critic's favorite - and key driver of the Marvel Cinematic Universe's motion picture storylines.

If the show has one knock, however, it's that it lacks superheroes. While Iron Man, Captain America, Black Widow and Thor are engaged in epic adventures on the big screen, the lesser-known agents of S.H.I.E.L.D. are often involved in slightly less impressive battles on TV.

That changed this season with the explosive debut of Ghost Rider. Driving his 1969 Dodge Charger - the "Hell Charger" - Robbie Reyes and his flame-glowing-skull alter ego have teamed up with S.H.I.E.L.D. in search of a mystical book, and to take down a mysterious ethereal enemy.

Seeing Robbie turn into the Spirit of Vengeance is a treat, to be sure. But, ironically, as fun as Ghost Rider is on screen, it's Robbie Reyes (actor Gabriel Luna) who's frequently providing the most compelling scenes.

Robbie is conflicted: He's made a deal with the devil, but he seeks justice - albeit through vengeance - for the battered and mistreated.

The same can be said for his pseudo partner, the Inhuman Daisy (Chloe Bennet), now also dubbed "Quake." Last season, she temporarily fell under Hive's mind control, and ultimately lost her boyfriend, Lincoln, when he sacrificed himself to take down the former Grant Ward. Faced with tremendous guilt, Daisy can't quite bring herself to reteam with S.H.I.E.L.D., though she continues to fight common enemies.

Reluctantly, Robbie agreed to work first with Daisy, then with S.H.I.E.L.D., to unravel a foe that put his uncle in prison, and now threatens the world.

As fans have hailed the addition of Ghost Rider to the ABC series, Luna has welcomed his entry into the Marvel world - and the perks of being super. The actor recently attended the premiere of "Dr. Strange," which releases wide on Friday, Nov. 4.

Ahead of Tuesday's Ghost Rider-centric episode, Luna chatted with BTS about his characters, and what they've brought to an already-captivating show. A selected Q&A follows. 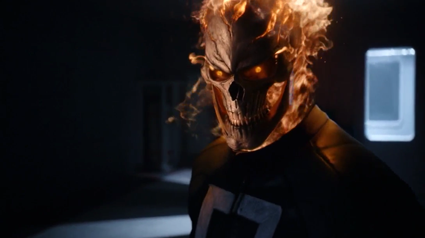 Q: How was the "Dr. Strange" premiere? That movie looks pretty solid.

Gabriel Luna: Everyone delivered. It was like "Inception" on acid. But beyond that, there's some great, great one-liners, and there's a lot of comedy. It's a good balance.

Q: You're part of the Marvel Universe now. How does that feel? What do you like about it?

Gabriel Luna: Well, it's something I've loved since I was 6 years old. And having come from this love, that I shared with my brother, and our mother was a single mother, had us pretty young - she was a teenager when she had us both - and he and I, we loved to collect the books. Action figures and comics was just how we rolled. He was a big Spidey and Ghost Rider fan. I was Hulk and Wolverine and X-Men, and all that stuff. And we grew up with it.

And he still has a great, great love for it, and a great, great knowledge of all that stuff. I just - it's hard to piece together, because, you know, you can't see the forest from the trees when you're inside it sometimes. But the fact that Captain America, Iron Man, all these guys exist in the same world as Robbie Reyes, as I do, it's wonderful, when you can just sit down and think about it.

Q: People were excited about the addition of Ghost Rider to "S.H.I.E.L.D." What did you think when you learned about the role, and what attracted you to the part?

Gabriel Luna: When I delved into the history of Robbie Reyes, which is, at this point in time, a brief history - which leaves us so much room to decide what Robbie is moving forward. But, once I went in and I read the books, and I saw this really great sense of the occult in the books, which is always part of the Ghost Rider lineage, and also how cool and calm Robbie was, how focused he was, and how judging he was, but yet still very warm to the people around him that he cares about - you know, his boss, Canelo; his brother; this cute redhead in class. You know, there's all these characters where you begin to see this dude, who just has this very quiet kind of swagger, which is pretty quiet confidence - which is a good quality in heroes, I think.

Robbie is a hero. And then you see he's overwhelmed with this power, and is invaded by this spirit, and the spirit just trying to ... it's an interesting dynamic in the books.

Our version in "S.H.I.E.L.D." is slightly different. The spirit is trying to pull him from his heroism, and kind of take him down a notch. And eventually they meet somewhere in the middle, which is the trait we know to be the Ghost Rider signature. He's neither good nor evil. He's simply the instrument of vengeance. And to cast his judgments on those who transgress against the innocent. And that's a cool quality about Robbie that I've always enjoyed.

And the way we're showing him on the show is a bit of a Frankenstein of all of this, of the different ideas we're having, and trying to come at it in a way most people will be surprised, and enjoy the show.

Q: You talk about people being surprised, and I think the biggest surprise, for me - and looking at your Twitter feed, I see I'm not the only one who thinks this - is that what we've seen on screen from Robbie has been just as good, if not better, than what we've seen with the Ghost Rider. For you as an actor, how does that make you feel?

Gabriel Luna: You know, something like that is always a gift. And you try to receive the gift, and then make yourself worthy of receiving such a great gift. A character who has all the elements we just spoke of, I'm happy. Because setting my head on fire, it costs a pretty penny. (Laughs) And if we want to do this, and do it in a prolonged fashion, you have to find ways to make him interesting when he's not - when I'm not the Ghost Rider.

Episode 3 was like that. You know, I was on pins and needles about that for a little bit. Once that came around, and I knew that there wouldn't be the full transformation in episode 3, I wondered, "Would people still want to know and want to ride along with Robbie?"

And it turns out they did. And I'm super-excited about that, and I'll just try to continue to do the work just to have that continue throughout our story, and however far Robbie goes from here.

Q: This show has really been ramping up for at least a solid year now. The addition of Ghost Rider is such a great fit. Had you watched the show coming in, and can you speak to how well this has all melded together?

Gabriel Luna: I've seen all of season three. Episodes are spotty here and there in season two. And then I watched - I was one of those who, when it first hit the air back in 2013 - was one of those who picked up the show right when it started. So, I came in and out of the show for a while. But then when I got the job, of course, I went back and watched all of season three again.

This group is fantastic. My favorite is Fitz Simmons. And I love what Iain and Elizabeth do together. I love Ming, and how completely badass she is, and what she is capable of doing herself when we're at work and doing these really elaborate fight scenes. And, of course, Clark's a legend. Henry is amazing. John, Jason, all these guys. I'm just happy to be a part of the family, and family's an appropriate word. This truly is one. When I was thinking about this group, this cast and crew, immediately you could sense that everybody comes to work, and they bring their "A" game, because what we're making is so magical, and just a beautiful fantasy. And if we really work hard, and we do it well, the stuff we can make together is really cool. 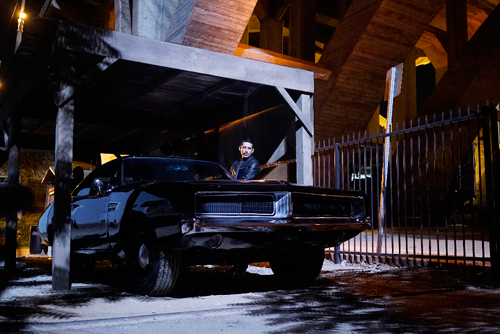 "Marvel's Agents of S.H.I.E.L.D.": "The Good Samaritan" - Robbie's shocking story on how he became Ghost Rider is finally discovered as Coulson and his team's lives hang in the balance. The episode airs at 10 p.m. Tuesday, Nov. 1, on WKBW-TV Channel 7. (ABC photo by Jennifer Clasen)