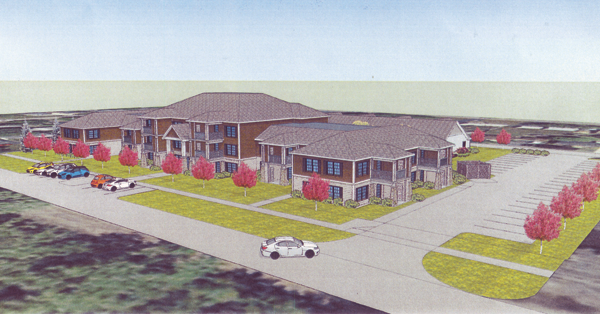 Orchard Park developer James Jerge received six variances from the Village of Lewiston Zoning Board of Appeals on Tuesday. He intends to transform the former Fairchild Manor site into what's pictured in the artist's renderings shown above, and below.

The ZBA unanimously approved all variance requests, except for the number of units in the larger building. Chairman John Ritter voted "No" on that item.

The board modified the first variance request, asking for a 15-yard setback instead of the proposed 10-foot setback. Speaking on Jerge's behalf, attorney Sean Hopkins of Hopkins, Sorgi & Romanowski, and engineer Chris Wood, of Carmina Wood Morris, agreed to make the change. The distance between the three-story and one-story buildings will decrease from 43.95 feet to 38.95 feet.

Hopkins reiterated that in person.

About a dozen Village of Lewiston residents were in attendance Tuesday, and only a handful spoke. It was a far cry from past meetings, where both the Red Brick Municipal Building gymnasium and the Morgan Lewis Village Boardroom were filled with residents eager to analyze Jerge's plan.

One ZBA member suggested the smaller turnout signified neighboring residents now approve of the project, which has been modified many times since it was first pitched in 2014.

Fairchild Place resident Holly Coty said, "I think this is a lovely plan."

Coty asked if the shuttered nursing home could be secured more than it is presently. She said, "There's hardly a week that goes by that somebody hasn't broken in there."

Hopkins and Wood said they would speak with Jerge and follow-up on Coty's request.

Colleen Giordano, who owns property on both streets, expressed concern that overflow traffic would spill out into the neighborhoods.

Hopkins said he didn't expect any overflow, and stated the site has sufficient parking spaces.

The Fairchild plan will next go to the Planning Commission, as Jerge seeks second submission approval. 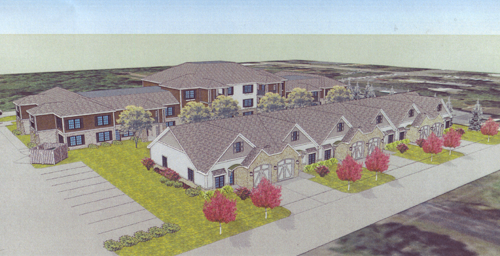