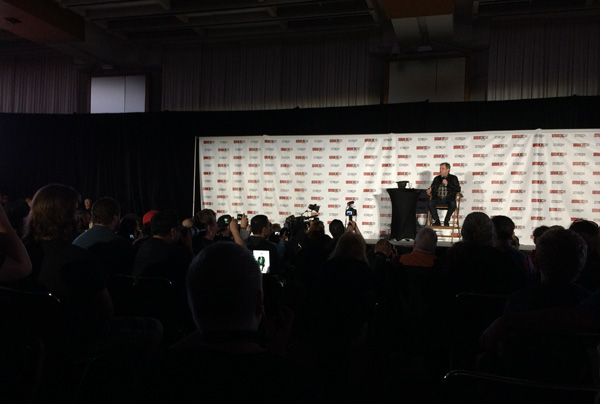 (Editor's note: This was not an interview. It was a panel discussion.)

As in past years, more than 100,000 were expected to walk the Metro Toronto Convention Center's north and south buildings last weekend during Fan Expo Canada, one of the largest comic conventions in North America. This year, however, thousands of those fans came for a special and rare treat: Q&A sessions with Mark Hamill, the actor behind Luke Skywalker in the "Star Wars" series, and the voice of The Joker in "Batman: The Animated Series" (and a dozen additional cartoons and video games).

Hamill prefaced his talk by saying, "This is not a show. This is like an intimate conversation between thousands of my new best friends and me, a beloved international pop icon - at least in my own mind!"

Hamill, the son of a Navy man, and the middle of seven children, moved from coast to coast and school to school over the course of 12 years. On Friday, he called himself a "comic book nerd," and said cons were something he looked forward to attending - in part, because he was bound and determined to find work in the entertainment industry.

When Hamill was young, he admired voiceover actors - and would tape-record them, and himself, to practice. After watching a Disney behind-the-scenes program, he said to himself, "Wait a minute. Let me get this straight. There's some guy whose job it is to get up in the morning, have a shower, eat breakfast, kiss his kids and his wife goodbye, and then go to work and do Donald Duck? I want that job!"

When he learned that people were needed to work other jobs on set, he figured, if nothing else, he could cater.

After a string of TV parts, Hamill landed the lead role in the 1977 blockbuster "Star Wars." Almost 40 years later, his Jedi Knight, Luke Skywalker, is still one of the most popular cinematic characters of all time.

Throughout the Q&A, Hamill drew laughs left and right as he shared tales of the legendary sci-fi action adventure "Star Wars" films. He also showed off his impressive vocal abilities, oftentimes adding accents and spot-on impressions of co-stars and Hollywood legends.

Hamill offered his first public comments on the recent death of Kenny Baker, the man who brought R2-D2 to life.

"He was an amazing guy," Hamill said. "I was very lucky to have seen him about a month and a half ago, for the last time, when we were in ('Star Wars) Celebration' in London. It was great to see him one more time - and I loved him. And I know all of you did, as well." 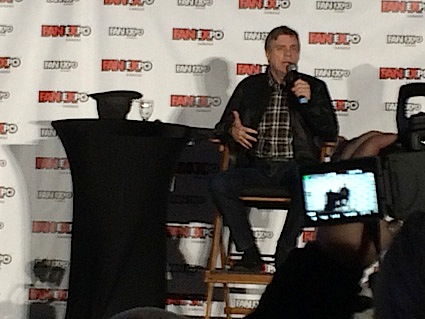 Speaking of "The Empire Strikes Back," Hamill told the story of learning the famed twist, where it was revealed the evil Darth Vader was the noble Luke Skywalker's father.

"(Director Irvin) Kershner said, 'I'm going to tell you something. You're going to know. George knows. And when I tell you, you'll know. So, if it leaks, we'll know who to blame," Hamill explained. "I said, 'What? What?' He said, 'Well, you know the line where Vader has you in (Cloud City), the line, "You don't know the truth. Obi-Wan killed your father." ' I said, 'Yeah; that's a great twist that Alec Guinness turned out to be the bad guy.' And he said, 'No; we're going to take that line out. ... And by the way, don't tell David Prowse (Darth Vader)."

The audience burst into laughter, as Hamill explained why Prowse couldn't be trusted.

"He saw 'Empire Strikes Back.' He walked out of the screening room, right up to the line of photographers, and he said, 'Who could believe it? Not only do I lob off Luke's hand, but it turns out I'm his bleeding father!' " Hamill said. "So, all the Fox executives grabbed their hearts. Begged the press, 'Don't print that.' And they didn't - to their credit."

Hamill said the secrecy surrounding last December's "Episode VII," "The Force Awakens," was unlike anything he'd ever seen. To ensure the film would maintain its spoilers, and become the highest-grossing movie of all time in North America, the actors were limited in what they were told - and even received scripts incapable of being copied.

"The secrecy ... is just getting crazy," Hamill said, and explained he can't say anything without it being analyzed online.

But, as fans of "Batman" and the live action "The Flash" already know, "You know me: I'm a Trickster and I'm a Joker," Hamill said, as the audience laughed and clapped.

Speaking of "Episode VII" star Daisy Ridley, whose character, Rey, has a mysterious relationship with Luke Skywalker, Hamill said he was at a college in England, and "I was talking about how much I admire Daisy. And 'Oh, she's so smart, and inventive, and the sweetest thing. She's gorgeous.' "

"As I was going on, I thought, 'Oooh, this is burgeoning into creepy, dirty old man territory," Hamill said. "So, I said, 'I really relate to her, of course, in a fatherly way.'

"What!?! Oh my gosh! Everybody just lost their lunch."

When he was asked if Luke could be Rey's father, "I said, 'No, no, no.' But then I started really playing with it," Hamill said.

Speaking of two other "Episode VII" actors, Hamill said, "I tweeted 'Happy birthday to John Boyega, who is 'son-sational.' And so this happened. Typo or spoiler - you be the judge!"

"Same thing, now. Oscar Isaac was born like four months before my son, Nathan. So I said, 'Happy birthday, Oscar. I could say you're my son's age, but I don't want to start any trouble!'

"Of course, the opposite is true: I want to start a lot trouble!"

Hamill said he deeply appreciated fan interest in the new "Star Wars" trilogy, but noted he is contractually prohibited from speaking about the upcoming "Episode VIII" and "Episode IX."

Hamill also has made recent appearances on The CW's "The Flash," reprising the role of The Trickster, a part he also played on the 1990s series of the same name.

"It's been an interesting few years for me, because, in the last five years, so many of the things that I was (doing) early on in my career have come back, again," he said. "Not just 'Star Wars.' Chris Roberts called me up. We did 'Wing Commander' in the '90s. We're going to do another one. We're going to do (video games) 'Star Citizen,' 'Squadron 42.' "

Hamill commented on the new standalone "Star Wars" movie, "Rogue One," which will be released Dec. 16.

"Have you seen the 'Rogue One' trailer?" he asked. As the crowd cheered, he said, "I know; it looks great."

Hamill said each proposed standalone film could have its own identity.

"Each of these standalone films have an advantage that the trilogies don't, because we have to have a beginning, a middle and end. It's like a three-act play. The standalones can establish their premise, get on, get the job done, and get off," he said.

Shifting gears and speaking of his time as The Joker, Hamill said, "I loved the Adam West 'Batman.' It just came at the right time for me. And I loved 'Batman' so much, and I wanted the whole world to know about that.

He was initially offered a smaller role, but when producers sought to recast The Joker, they reached out to Hamill's camp.

"By the time I went to audition for The Joker, I had the equivalent of like an arsenal of all these different kinds of laughs (built while working in theater). I had great confidence."

Hamill joked confidence is never a good strategy, and that the key to landing acting jobs is feigning interest.

"When I went into audition, logically, I said to myself, 'There's no way - even if they wanted to - that they could cast Luke Skywalker as The Joker. It's a public relations nightmare from the get-go!' "

He said, "It's just too much. I mean, Luke is such an icon of virtue. Why would they cast (me as) this iconic villain - this insane person? So, I knew I couldn't get the part. So, I said, 'I'm going to go in there and make them really sorry they can't cast me!' "

When Hamill learned he was, in fact, given the part, he told his agent, "Oh, no, I can't do that! It's The Joker. It's too high-profile!"

"And then your friends don't help," Hamill said. "My friend, who's an actor, said, 'Boy, you're pretty brave.' I said, 'What are you talking about?' (He said,) 'Well, I wouldn't want to follow Jack Nicholson in anything.'

Hamill also participated in photo and autograph sessions with fans. While he said those were fun, he noted interacting with fans at Q&A sessions was his favorite part of the weekend.