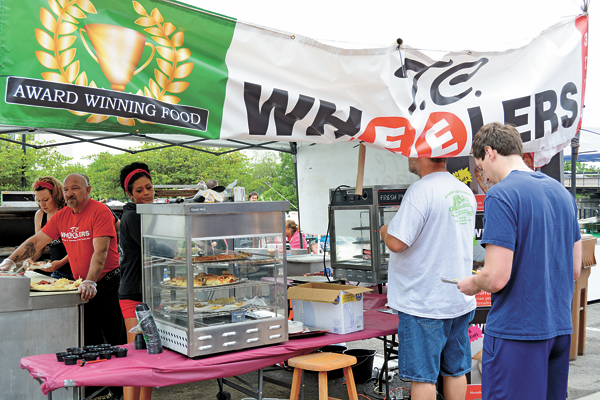 Eventgoers line up at TC Wheelers Bar & Pizzeria during the Taste of the Tonawandas at Gateway Harbor. TC Wheelers will be just one of many vendors on hand for the return of Pizza Fest to North Tonawanda, which is set for Aug. 31 along Gateway Harbor in NT. (Photos by Lauren Zaepfel)

The Chamber of Commerce of the Tonawandas and Gateway Harbor Inc. are partnering to bring back Pizza Fest after an approximate three-year hiatus.

The event will take place from 5-9 p.m., Wednesday, Aug. 31, along Gateway Harbor at 245 Sweeney St. in North Tonawanda.

Featured will be live music, ice cream and, of course, plenty of pizza.

Linda Foels, president of Tonawandas Gateway Harbor Inc., said the main goal of the event is to "focus on local pizzerias and let them get their product out there."

At least seven different vendors from the Tonawandas and Wheatfield areas are going to be on hand, offering up their pizza, sides, subs and chicken wings.

Each vendor is required to offer a traditional pepperoni and cheese pizza, as well as a specialty pizza.

NT's Submasters will be offering its chicken, bacon and ranch pizza as well as beer-battered, deep-fried macaroni and cheese with bacon and its Philly cheesesteaks, owner Thomas Daniels said.

TC Wheelers will offer its Reuben pizza, which was voted best pizza at this year's Taste of the Tonawandas.

All pizza slices will be offered for a $1 ticket, which can be purchased at the event booth stationed in the center of the venue.

Slices will be about half the size of a traditional pizza pie slice, so people can taste more options before filling up.

After trying a few slices, eventgoers can vote for their favorite pizza.

For dessert, Canalside Creamery will serve up some ice cream treats.

Although Pizza Fest is making a comeback, Wednesday's event will feature new elements.

In previous years, the pizzerias "donated all their pizza and their time. ... Businesses just can't afford to do that anymore," Foels said. "So, we changed it to the Taste of the Tonawandas format, where they give us a very small percentage of their cost so we can pay for marketing and security and things like that. So it's back and in a new format that favors the pizza places."

Angela R. Johnson-Renda, executive director of the Chamber of Commerce of the Tonawandas, said, "In the past, there was one entry fee and it was all-you-can-eat. The pizzerias had a difficult time keeping up with the number of people, including their families, who came hungry for pizza and wings!"

Foels said Pizza Fest used to be held indoors and only pizza was offered.

"We said, let's take that (concept) and let's expand it so that its appeal to different types of people and a lot more people," she said. "And now we have the benefit of ... the aesthetics of Gateway Harbor. ... So we can expand for the pleasure of the public."

The event is admission-free, unlike previous Pizza Fests.

"The choice is yours," Foels said. "You can spend a little; you can spend a lot; you can listen to the music; you can sit and watch the canal - it's just so much more appealing than just inside a building with an admission price."

So what inspired both Foels and Johnson-Renda to take on their first Pizza Fest?

"It really was the public," Foels said. "I mean, we try, through social media and through our concerts and different activities, we try to listen to what the people want. And the public, they've been requesting that the Pizza Fest return, and we wanted to make it more appealing to everybody."

Indeed, Johnson-Renda said, although the event "definitely was missed" it "needed some tweaking."

"Since the last Pizza Fest, citizens from both communities have been calling with inquiries as to when the next one will be!" she said.

Also new this year, the chamber and Gateway Harbor are joining with event sponsors to work toward reimbursing all participating pizzerias with 85 percent of proceeds from ticket sales, Johnson-Renda said.

But Fred Priano, vice president of Gateway Harbor and manager at Jack Devine's Neighborhood Pub, said the biggest benefit of Pizza Fest is it gives his the company exposure.

He said, by taking part in the event, he hopes to get the Jack Devine's name out a little better and give people more of a taste of what is offered.

"(And) we're starting a new menu the day after (Pizza Fest). So, this way, we can get the menu out to people. I do expect a lot of people out there, too," he said.

Daniels said, "You get to see what the competition is doing, and you get to meet other people in the community. ... I mean, we've been here six years, but there's still people that don't realize (we're) here. There's a lot of people that, pretty much, constantly depend on their standard, regular pizzeria they've been going to for 20 years, and it gives them a chance to try something new. We're not looking to take anybody's business, but (provide) just a little different option."

And besides, he said, "North Tonawanda is a great community. It's good any time you can get some of the people together." 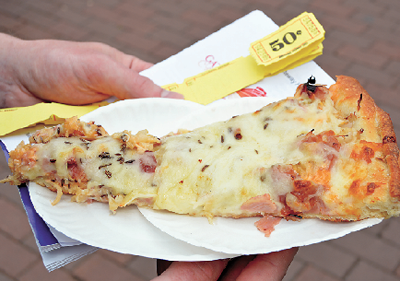 Shown is a slice of TC Wheelers Reuben pizza. The specialty pizza will be offered at Pizza Fest and was voted "best pizza" at the Taste of the Tonawandas.