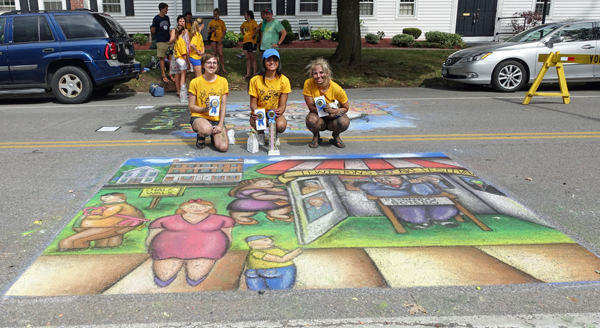 For the second year in a row and third time in four years, Grand Island High School artists won the annual Chalk Walk competition at the annual Lewiston Art Festival.

Lovepreet Kaur, Lex Hy and Julie Klein took home the blue ribbon among 10 teams in the event Saturday, which features three-artist teams drawing a chalk mural on the road in the Village of Lewiston. Judges awarded a second-place red ribbon and third-place white ribbons to teams from Lewiston-Porter. Mount St. Mary Academy won the President's Award, while Sweet Home won the People's Choice Award, voted on by patrons of the two-day festival.

"It feels really cool to win," she said. "This is probably the first time I've ever gotten something like this for my artwork, so this is really cool."

Though Klein can compete next year, it was the last go round for Kaur and Hy.

"It feels really good, like the hard work does pay off," Kaur said of winning the Chalk Walk.

"It's a fun experience to work with people, gather ideas, and make something that means something to us," Kaur said of the event, which she has taken part in four times, winning three blue ribbons.

"It feels really great, especially because it's our last year, for me and Lovepreet," Hy said. "It's great to go out with a bang."

"And I think we worked really hard on it," Hy said, laughing. "We were, like, about to throw up because of the heat, but we kept going, so it was all worth it." 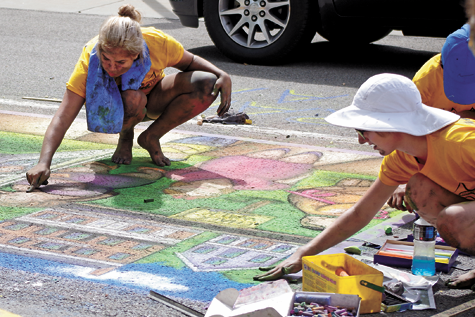 Lex Hy, left, would win a blue ribbon if they gave awards to the artist wearing the most chalk. She was covered head to toe after the four hours of the event. "I honestly just focus on what I'm drawing and then I stand up and, you know, it is what it is," Hy said. She is pictured with teammate Julie Klein. (Photos by Larry Austin)

Rain preceded the event, which ran from noon to 4 p.m. Saturday, but held off until after the awards were handed out. The heat index was well over 90 for the entire event.

"We thought it was going to storm. It still might today. The chalk was wet when we got here, so it made it kind of difficult to get ready, but it was OK," Klein said.

Hy said to address this year's Chalk Walk theme of "50 Years in Art," the team choose an artist who was active from 50 years ago to today.

"We picked Botero, and he's still alive," Hy said. "He made his figures really round and rotund, and he's considered a surrealist because he plays with dimensions. We made the Chalk Walk scene at the Lewiston 50th Art Festival in celebration of that in Botero style."

Botero is the main focus of the piece, and is pictured in a tent with his famous paintings.

"Looks like our principal, too," Hy said of Botero and GIHS Principal Dan Quartley.

The mural also included the Frontier House, a Lewiston landmark.

"Every time we try to add something that represents Grand Island, Lewiston or this area, so it kind of makes it unique," Kaur said.

Next to the Frontier House, the artists drew DiCamillo Bakery, where each year the GIHS trio cap off the Chalk Walk event by eating the bakery's giant ice cream cookie sandwich.

Teacher and Chalk Walk adviser Megan Gaiek said the team practiced in the high school's back parking lot six or seven times this summer. The extra effort paid off, according to response from patrons of the Art Festival, who watched the students at work on the road during the festival.

"I think that people really saw the effort that we put into it, because we didn't just pick one art piece to recreate or something," Hy said. "We threw a bunch of things together, we talked it over, and I think it really shows in what we did."

Kaur said she's going to miss the experience of Chalk Walk. After taking a year off, Hy plans to go to Seattle to take acting classes. Kaur will study architecture at the University at Buffalo in the fall. Hy said she'll miss Mrs. Gaiek, and her teammates.

"It's fun planning out everything, really putting effort into our art," Hy said. "Even if we don't win, it's fine. It's all about being a team. All that cheesy stuff, it's true."

"It was really nice to get to hang out with them and get to work with them. They're really good artists," Klein said, saying she was sad she wouldn't be able to extend the winning streak with them next year.

If Kaur and Hy return to cheer on their alma mater's team at the 51st Lewiston Art Festival, they'll likely join graduate and fellow Chalk Walk teammate Abhiraj Grewal, who was on hand Saturday. He was a member of the GIHS Chalk Walk team for four years.

"I have to come out" to see the Chalk Walk he said, saying he feels like part of the program. He attributed GIHS's longtime success in the event to Gaiek, who "knows how to pick out the best people." He said GIHS is bound to come first.

"It's always satisfying to see the streak keep on going," he said. 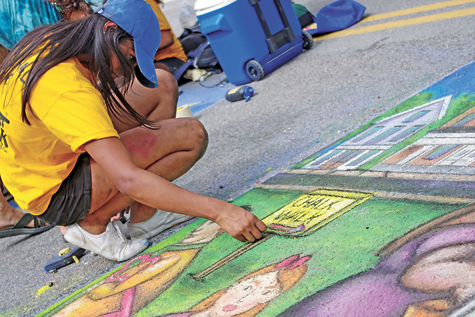