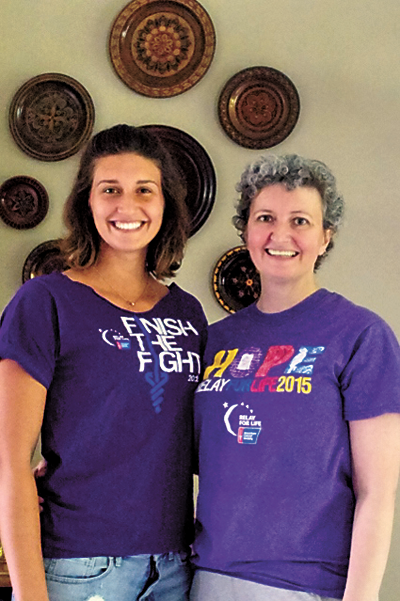 Natalie Stanczyk, 47, and her daughter Sarah, 22, readily express optimism. Even cancer could not dampen their enthusiasm for living. After Sarah was diagnosed with Hodgkin's lymphoma, stage 3B, she told her mother, "Don't worry. It's the best cancer to have."

Sarah's cancer journey began in January 2014. "I was constantly getting sick," she said of her sophomore year at Duke University in Durham, North Carolina. An athlete, Sarah had joined Duke's rowing team.

She said that, when she visited the team's athletic trainer for an unrelated condition, the trainer "noticed that I had a weird cough and that my neck was kind of swollen. She sent me for a chest X-ray."

The next day, after more testing, including a biopsy, in the hospital, Sarah was given her diagnosis.

She was taken immediately to the cancer center. Her parents, Natalie and Andy, and her brother, Adam, arrived the next day to support her.

The biology major said, "I had chemo every two weeks for six months. I didn't take any time off from school."

She graduated three weeks ago and is planning on moving to Santa Monica, California, to work in a hospital to get clinical hours with the goal of applying to physician assistant school. She is also looking forward to walking with her mother as honorary survivor/caregivers in Relay For Life on June 10 at Veterans Park.

Natalie said that she flew down to North Carolina to be with Sarah for each of her chemo appointments. Sarah said that both her mother and her best friend, Halle, were at her side every time she had chemo.

"My hair fell out and I was nauseous," Sarah said.

The rowing team and Sarah's sorority, Kappa Alpha Theta, ran a fundraiser for her. "A couple of my friends shaved their heads with me. For a couple of months, I walked around bald, and people complimented it. It made me feel confident," Sarah said.

Sarah was told that she was in remission on May 1, 2015. Three days later, Natalie, an attendance clerk at Huth Road Elementary School, began her cancer journey when she was diagnosed with stage 2 breast cancer.

When told that her mother had cancer, Sarah said, "Really? We just finished."

Natalie said, "I had surgery, chemo and radiation. I went for radiation at lunchtime. I didn't take time off. I didn't want it to slow me down."

It was Sarah's turn to be the caregiver.

"I took her to her appointments," Sarah said. "After her surgery, she sat in a chair," unable to move. "I brought her anything that she needed."

Friends brought meals to Natalie for five days after each of her four chemo treatments.

"We learned about how supportive our wonderful friends and family were," Natalie said.

"We couldn't have done it without them. There are worse things to have," Sarah said. "You have to find a positive. ..."

"In everything," Natalie said.

Natalie finished radiation on Nov. 23, 2015. In January, she had her last scan and was told she was cancer-free.

Sarah said the cancer experience that she and her mother shared strengthened their relationship.

"We were always very close," she said. It (cancer) brings you to a new level. We have to take care of each other when we're feeling the worst."

"As awful as it is that we had cancer," Natalie said, "we were fortunate in the kind of cancer that we got and that it was caught in time to be treated."

Both mother and daughter are dedicated to Relay For Life. "I was invited to Relay as a survivor two years ago. I went to Relay straight from chemo. I didn't stay long. I was not feeling good," Sarah said.

Natalie said, "I went with Sarah (two years ago) when she was bound and determined to go. We walked, and I held her arm. Last year, I did not feel good (at Relay). It was right after surgery. It was a little rough."

Sarah and Natalie tell others who are diagnosed with cancer. "Keep a positive attitude and surround yourself with people who help you stay positive," Sarah said.

She added, "And you'll have a great story when you're done."

"It's just a bump in the road," Natalie said.

She said she remembered what a grim prognosis cancer had in the past. "When I was young and I heard that someone had cancer, it was a death sentence. With advances in medicine and research, it gave us a chance that we never had."

Sarah said having cancer gave her empathy for people who are going through serious health issues. "Spending all of that time in doctor's offices and in hospitals and in talking to doctors and nurses reaffirmed that I wanted to be a physician's assistant."

If, two years after Sarah was declared to be in remission, she is still cancer free, she will be pronounced cured. In the past, Natalie said, 'you never hear cured.' "

Mother and daughter, Sarah and Natalie Stanczyk, are honorary survivors/caregivers for the Grand Island Relay For Life, which will take place June 10 at Veterans Park. (Photo by Alice E. Gerard)