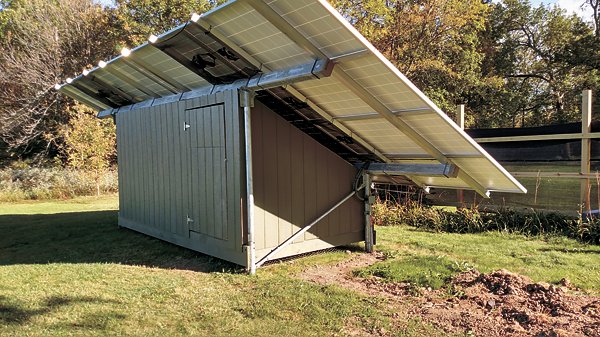 The Wheatfield Town Board voted to approve a six-month moratorium Monday on the installation of ground-mounted solar panels and solar farms in the town.

The moratorium was suggested by members of the town's Energy Application Focus Group to give them time to work on a town law to regulate the installation and location of the ground-mounted solar panels.

Town of Wheatfield Supervisor Robert B. Cliffe said, last year, a family wanted to "put a standalone unit in their backyard in a residential area and that brought up a lot of questions. And this year ... there's been all kinds of talk of large corporations moving into town, taking over farmland - farmers selling to or leasing to these large companies for very large units. We went to the law and found exactly three lines of code and absolutely no control over them."

"Right now, they're not specifically allowed in the ordinance," said Wendel engineer Drew Reilly, representing the town's Energy Application Focus Group. "So, if they came in and tried to get a permit or go before the Planning Board, they would be told that it's not allowed in the law."

Reilly made sure to note the moratorium only applies to solar farms and ground-mounted solar systems, not those made for roofs.

"You can still approach the building department if you want to put solar panels on your roof or on your business and you can get a permit to do so," Reilly said.

He added, "If you put solar panels on your farm to specifically use it for powering your farm, that falls under Ag. and Markets law and that's allowed. But we're talking about an installation where you're selling power to the grid. It's not a farm; it's not an agricultural activity."

Reilly said the Energy Application Focus Group has already done research on how other Western New York communities regulate ground-mounted solar panels, including referencing drafted laws from the Town of Lockport and the Town of Hamburg.

He said the biggest issues among residents have been the aesthetics of the solar panels, as well as glare or reflection that come from them.

Dan Schroeder, who lives on Ward Road, said he has experienced the glare from his neighbor's ground-mounted solar panels and, in order to counter it, he obtained a variance to install an 8-foot fence on his property. He seeks to install a pole barn, as well.

Stuart Newman, Schroeder's neighbor and owner of the installed ground-mounted solar panels, said, "These panels are very low glare. Comparative to the panels down on River Road, those are like mirrors, mine are not. You can barely see your reflection in them."

After both neighbors presented their sides of the argument, Reilly encouraged them to become involved with the Energy Application Focus Group, as they have first-hand experience on the subject of ground-mounted solar panels.

"We just want to make sure we write rules that address those potential problems," he said.

The board allowed the town's Highway Department to proceed with emergency rehabilitation repairs to the Walmore Road Bridge, as a portion of the bridge's headwall has failed. This has resulted in closing the crossing from two lanes to one in order to direct traffic away from the edges of the bridge.

Normally, the town would have to undergo its competitive bidding process, however, due to the unforeseen severity of the situation, the town can proceed immediately.

Highway Superintendent Paul Siegmann said, if he uses a 40-foot slip liner, his "ball park" estimated cost would be around $46,000.

To try and save on the cost, Siegmann said he will try and work with the Army Corps of Engineers.