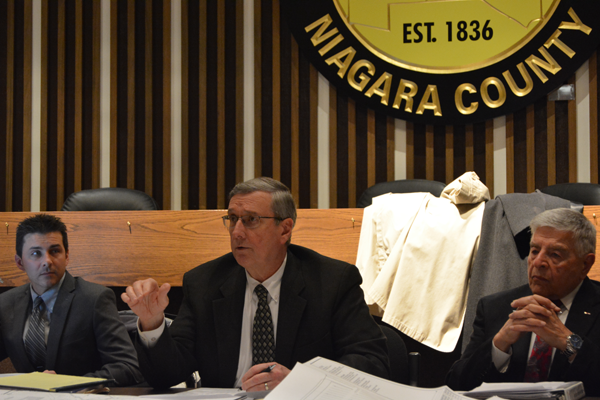 National Fuel presented an early sketch plan of its proposed Liberty Drive dehydration facility to the Town of Wheatfield Planning Board Wednesday night.

"Now is the time for you to give us the feedback, so that we can make sure your issues are addressed, and if changes are necessary, we'll warrant it; we will do everything we can to address reasonable concerns," said Adam S. Walters, a partner/attorney at Phillips Lytle LLP, who is representing National Fuel.

"If we can make those changes while we're still in the FERC process, it will be part of the (Federal Energy Regulatory Commission)-approved facility. ... Once that FERC approval comes, it's much harder to make changes. So it's a lot easier if we do it now, do it through the local zoning process, (as) a process we're all familiar with, and that's why we're really here tonight."

Town of Wheatfield Supervisor Robert B. Cliffe provided a list of questions brought to him from residents.

"We've had a lot of questions throughout this whole thing. ... Probably the most significant concern among residents is emissions," he said. "We need to define the emissions. Is there a way to monitor the emissions?"

Residents echoed Cliffe's questions and requested there be testing of benzene and another emissions.

"There's a minor expense," Planning Board Chairman Walter Garrow said. "I know ... there's an expense to do that. ... It's not really expensive."

Walters said, "We will certainly address testing and how it works under FERC's rules. ... I will remind you: The board has to be very careful if it tries to impose any restrictions that go beyond FERC's requirements. That would be, from our perspective, unlawful."

"There is a topic of good-will," Garrow said.

"There absolutely is," Walters replied. "All things will be taken into consideration. ... I just want the board to be cognizant of the rules."

"You're going to be my neighbor," Wheatfield resident Mike Alianello said. "My backyard backs up to this. All my other neighbors around me are good neighbors. We work together - if we're having a party, we cut the noise down, and so forth, right then. As far as the emissions - that's (how) I'd like you to be my good neighbor, if this is going to go through, by testing it."

Alianello said he was concerned of what would happen if a malfunction occurred, and wasn't detected right away.

"In turn, we're going to have the emissions over our heard," he said. "That's the type of good neighbor I want to look for: Somebody that will look out for the people that live around them. That's what we're really after."

After hearing the concern of emissions from several residents, Walters said, "That's helpful for us to understand as we move into the site plan review process, and that's where we can focus some of our attention."

"We've heard that this facility's only going to be running two days a year based on 2015 data," Wheatfield Deputy Supervisor Larry L. Helwig said. "But you're going to be around two days. It could be a few more days, it could be a couple days less."

Helwig asked if the gas could be dried at existing facilities along the pipeline before reaching Wheatfield.

"Why can't we just eliminate a little bit more water out of those streams, so that you don't need this facility? Why don't we look at eliminating this facility by drying it (the gas) up a little more from one of the other sources?" he asked.

"We'll be happy to provide some information on that in the site plan application materials, but I will tell you, we need a federal certificate of necessity," Walters said. "FERC will have to rule if this facility is necessary for the operation of the pipeline. If there were ways to do it without building the facility, we couldn't get a certificate of necessity. But you ask a good question and I will get a better answer."

After review of the initial sketch plan, the Planning Board made several requests, some of which included a noise study, emergency response plan and full-size design plans. The board also requested the facility, although unmanned, have a monitoring system.

"This was a preliminary meeting with the goal to educate the Planning Board, but also get issues and concerns so that, as we continue with the design of the facility, we can make sure that those concerns are addressed," National Fuel spokesperson Karen Merkel said.

At this point, she noted, it is unknown when a full site plan will be brought back to the Planning Board. When it does arrive, "It will have a very detailed plan that will address all of the design, all of the issues, any of the concerns ... that were brought up today," Merkel said.

FERC compiled submitted public inquiries on the project and sent them to National Fuel, which, in turn, sent its responses to FERC Tuesday. Responses are available online at http://wheatfield.ny.us/308/National-Fuel.