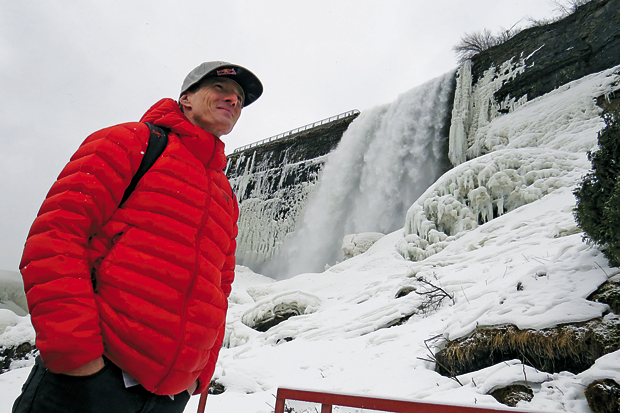 Will Gadd is pictured at the base of the Cave of the Winds in front of a less-frozen falls. (Photos by Joshua Maloni)

"It feels great to be back here," Gadd said. "I think last year we obviously had a great year for ice. And this year it probably wouldn't have happened. So I feel pretty lucky."

Sitting inside a warm Hard Rock Cafe, Niagara Falls, USA, Gadd said, "I'm glad I don't have to do it again. ... But it was fun!"

Prior to a guided tour of a less-frozen falls, Gadd had lunch with members of Red Bull North America and two fans who won a Wegmans-sponsored contest.

Mark Thomas, western district director for the state Office of Parks, Recreation and Historic Preservation, also was on hand. Gadd worked for more than a year with State Parks to obtain a special permit allowing him to climb 140 feet - about 15 stories - of frozen falls on Jan. 27, 2015.

The event made headlines around the world.

"I think what it did is it brought notoriety to the falls," Thomas said. "It was timed at the same time as the so-called 'Frozen falls.' Same time frame. So, I think it was kind of a perfect storm of really good publicity - it brought a lot of people out to the park in the winter, and kind of reawakened peoples' memory that this is a really good place to come in the winter. It's so different than the summer.

"I think it accomplished that. I think that's the biggest thing that it did for us. In terms on public relations, it was a huge plus for us. Any time you've got free publicity out there - Red Bull having their website up with that on it - (that) he's climbing at Niagara Falls - it's free publicity for us. We couldn't afford to buy that kind of publicity, if that's what we were doing.

"It worked out well for us. It brought people in. That was the biggest plus, I think." 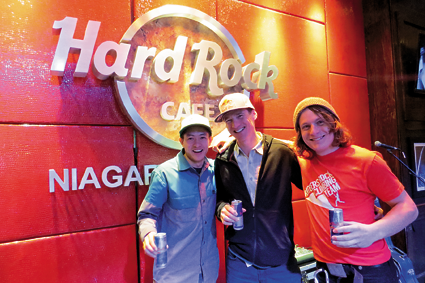 Will Gadd (middle) had lunch Thursday with "Win with Wegmans" contest champion Adam Nawrot of New Jersey, right, and Arthur Eng of Delaware. They are pictured inside the Hard Rock Cafe, Niagara Falls, USA.

Claire M. Seveno, sales and marketing manager at Hard Rock Cafe, said, "Will's climb has really showcased Niagara Falls as a year-round tourism destination. It has helped showcase that visitors are able to come during the winter months and see this one-of-a-kind beauty transformed into an icy blue frozen wonderland."

To honor the occasion, and Gadd, "Hard Rock Cafe, Niagara Falls, has created a limited-edition pin in honor of Will Gadd and his historic climb up frozen Niagara Falls," Seveno said. "The pin celebrates Gadd's significant accomplishment, as his journey continues to inspire our community year-round.

Gadd reflected on the past year and what his climb meant to him, his sport and to Niagara Falls. 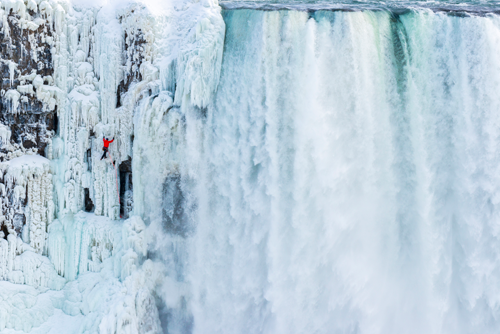 Will Gadd ice climbs the first ascent of Niagara Falls on Jan. 27, 2015. (Top and below photos © Red Bull Media House) 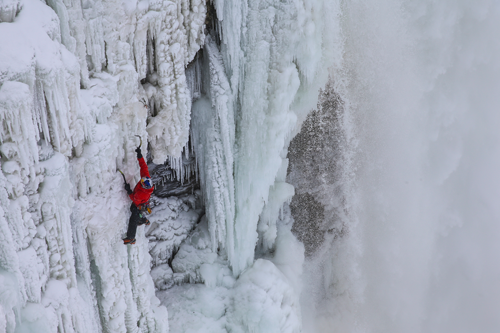 NFP: Obviously what happened here last year was unprecedented. What was the original goal? Were you hoping to find a "Frozen falls"?

Will Gadd: The idea was, is it even possible to climb Niagara Falls. Who knows? It wasn't a sure thing, at all. It was a huge gamble on the part of Red Bull, the parks and the state, obviously, to say maybe it would work. That's pretty cool. It was not a for-sure thing. ...

It had to be frozen to climb it. You couldn't do it right now. There's not enough ice there. So you could have all the planning in the world, but if the conditions aren't good, it's not going to get you anywhere.

It was a big gamble on everybody's part. But I'm really happy that it was a cold year!

NFP: How do plan for something like that, not knowing how the water's going to freeze?

Will Gadd: Well, I've been ice climbing for more than 30 years. So I have a lot of experience with different forms of ice and different conditions all over the world in different seasons. It took all of that background put together to make the climb reasonably safe and reasonably secure.

You know, everything I've done in my career as an ice climber led to that safe and successful ascent. It was a culmination of a long series of small events.

Everybody sees the picture of me climbing, and they're like, "Oh, that just happened." But it took many, many years of learning different forms of ice climbing and how to protect it; how to organize it so that everybody was safe; working with a large group in a really violent place.

You know, it's a death slide right to the lip of the falls. And yet, we worked together - especially with the park police - and made it safe.

At the time, State Parks issued a statement that read, "While ice climbing is not allowed in State Parks, the agency issued a special permit allowing this activity after a comprehensive safety plan was created. State Parks Police, in coordination with the Division of State Police Aviation and Special Operations/Response Team, City of Niagara Falls Fire Department and the Niagara Park Police (Ontario), coordinated planning and response."

On Thursday, Thomas said, "Obviously, we gained, because Will Gadd and his team had expertise that they brought with him, that they shared very openly with our park staff, with our park police, having to do with ice climbing in winter; dealing with ice conditions and ice rescue setups. There wasn't any rescue to be done, but they were prepared for that.

"There were some good educational benefits for our parks staff and our park police, as well, in case we have some kind of situation in the future, which is not a planned event. It's always good for us to make sure that we can save lives or prevent further disaster if some of our staff would be involved with something and then get injured. If they have better training and better equipment and tools, they're much better prepared to maintain their own safety while they're trying to rescue somebody else, if that happens in the future.

"That was another benefit, which we hope we never have to use."

NFP: For all the people that have seen the falls, not many have seen it from the vantage point you did.

Will Gadd: Yeah, I hope not!

NFP: What was it like to look at the falls from that perspective?

Will Gadd: The first time I was at the base of the falls it was, pretty honestly, overpowering. It's so loud and so violent. As a climber, if you fall off before you get protection in, you end up at the bottom. At the bottom of Niagara Falls, it's just a huge pit down there. If I fell off the opening bits of it, you go into what we were calling the "cauldron of doom" down there. You do not want to go there.

And so it was a very good time to focus and do things right. And also put in the best safety systems I could. But, you know, it's still a risky thing to do. I'm not encouraging anybody to do what I did. It's a high-risk place down there - even with a year of planning and a year of focus. It still felt like it was OK, but it's not something I want to do again (laughs). 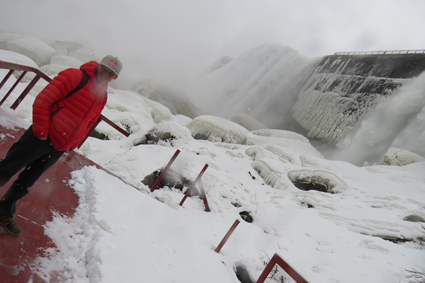 Will Gadd in front of the falls.

NFP: Tell me a little bit about how your life has changed since then. You made national news.

Will Gadd: International news. I was in Japan a couple weeks ago; I was ice climbing over in Japan and doing some presentations in Japan. The people in Japan knew about that. Some of them brought copies of Japanese magazines and stuff.

I don't think my life has changed in a dramatic way, but I've had some more opportunities and I've gotten to share my sport with the world. And that's really unique.

All over the world, people heard about ice climbing in a positive way, in one of the most beautiful places in the world. I think it's raised the awareness for my sport. And, hopefully, of Niagara Falls in winter, and summer a little bit. I'm lucky to have been part of that.

It's definitely given me some opportunities for corporate speaking that I didn't have before. I really enjoy that.

Life's just been really good. There hasn't really been a great downside to any of this, other than I've had to get a bit better at managing my time, and make sure that I'm at home enough with my kids. On the other hand, I get to do more of that.

My kids don't care. They're like, "Dad, where's my waffles?"

Gadd lives in Canmore, Alberta, which is the western side of the Canadian Rockies.

NFP: What's the next big challenge for you?

Will Gadd: I've got a few of them. I've been chipping away, so to speak, at a few different things. I was in Greenland recently working on a project and I'm going to go back there again. This is a really neat project helping out with some climate research in Greenland and trying to figure out what's happening with the ice cap there.

And I'm doing a project in Antarctica. And then I just got back from Japan. And now I'm going to stay at home and climb. And I still guide a fair amount, also. That's my kind of office. So I do that. And writing and I've got a couple videos to finish.

There's always lots to do, but I like coming back here. I spent a lot of time here in preparation for the climb. And every time I come back here now, I've been here so much it feels a bit like home. I feel very - it's just comfortable here.

Will Gadd is online at http://willgadd.com/. 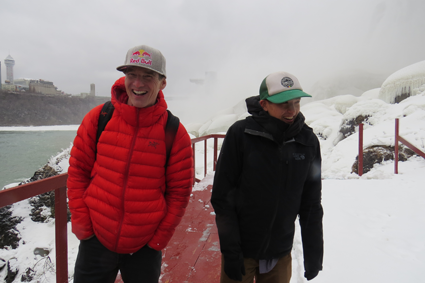 Will Gadd and Arthur Eng. 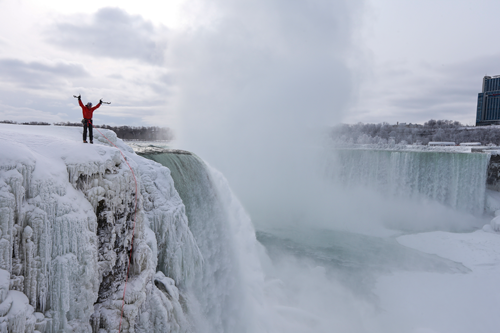