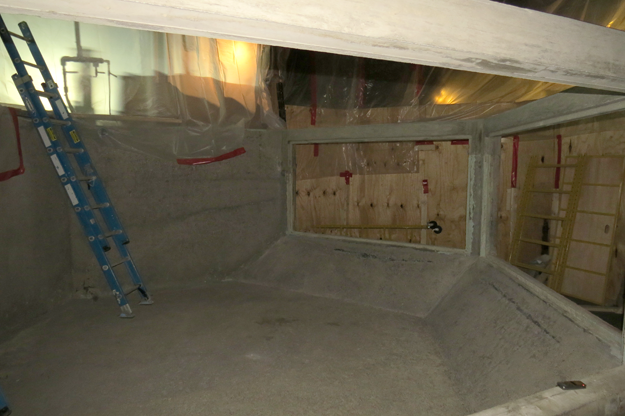 Pictured top is the area of the Aquarium of Niagara that will be transformed into an exhibit based on the fisheries restoration of Lake Ontario.

As the Aquarium of Niagara continues its "Join Our Journey" renovation campaign, guests have noticed some construction barriers inside the Whirlpool Street facility.

"We are refurbishing two of our larger exhibits outside of the main tank. These are 10,000-gallon systems. And these tanks have been here since the beginning - since 1965. Fifty years old," Supervisor of Exhibits Dan Arcara said.

Tucked behind a closed-off section, work is well underway on a brand-new Lake Ontario exhibit.

"We got a ($300,000) grant through the DEC to do an exhibit based on the fisheries restoration of Lake Ontario," Arcara said.

"This will house some Atlantic salmon, some Coho salmon; we'll have some walleye and some bass," he explained. "And we'll just talk about the fishery in general - where it was and where it is now; what impact we've had on the fishery; and what's being done to restore the fishery.

"We'll also be focusing on a project called 'The Sturgeon Restoration Project' that is coordinated by the New York State DEC. Lake sturgeon are an endangered species. They're indigenous to the Great Lakes. They were heavily over-fished early on last century. We are going to be housing four little fingerlings. And then, what the DEC does is they hatch them out and they actually release them. Right now they're doing it in the Genesee River to restore the populations.

"So, we're just going to be housing (the fish) for them. We'll talk about the program; get the word out. And then, when they get a little too large for our exhibit, we pass them back to the DEC, and then they release them at their discretion. And then we'll just get a few more in. So, we'll constantly change those out."

Aquarium of Niagara Executive Director Gay Molnar said, "The Niagara County Committee on Fisheries is going to be coming in and working with the staff, so collaboration is very synergetic."

"And then, we're actually going to be also doing an invasive species exhibit, talking about some of the critters that have invaded the Great Lakes through commerce, man's activities. ... That was another thing that was paid for through the grant."

Read more about the Aquarium of Niagara's plans for the future on our website, www.wnypapers.com. To learn more about "Join our Journey," visit www.aquariumofniagara.org or visit the Niagara Falls attraction at 701 Whirlpool St.

Shown is one of the fingerlings that will call the tank home.