Corey McGowan is encouraging all Islanders, especially anyone who has opposed this weekend's Gus Macker Tournament, to come out and see what the fun-filled, family-oriented event is all about.

McGowan, of Corey McGowan Productions, stepped in at the last minute this past spring when it was announced the national 3-on-3 basketball program for charity would not return to the region because neither Darien Lake (host last year) nor Buffalo (host for the previous 22 years) would be able to participate this year. The young promoter saw the Island as a perfect host to benefit charity as well as Island businesses and residents.

"It's been an eventful summer to say the least," said McGowan of his effort to bring Macker here. "To see something that's been around for two decades go away wasn't an option."

About 260 teams, equaling about 1,040 players (four per team, with three playing at any given time) will be participating. They come from all over Western New York, as well as "Mackerheads," as McGowan calls them, coming from places like Toronto, Detroit, Brooklyn and Washington, D.C. The men's and women's divisions each are bracketed by age and skill. Players participating in the Island event will be as young as 6 years old and as old as 64. Each of the approximately 25-minute games must be won by 2 points.

Spectators are encouraged to come watch the demonstration of hoops talent for free, McGowan said.

Grand Island Boulevard, between Whitehaven and Baseline roads, will be closed during the Gus Macker, with courts set up at intervals. Watchers should bring lawn chairs or blankets similar to what they do during the Fourth of July parade, McGowan suggested.

On the Town Hall campus, four courts will feature top teams as well as special events throughout the day for spectators. 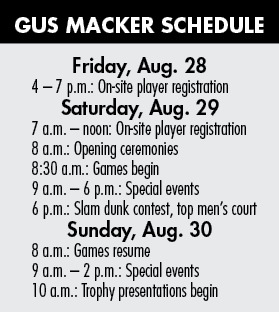 Bleachers will be available. Spectators also can sign up for a variety of special events, including a 3-point shooting contest and free throw contest. The cost will be from $2 to $5. Children will be able to enjoy the playground as well as other kid-centered activities. A variety of Island businesses and groups will be selling food and beverages.

There are 44 Gus Macker Tournaments across the country assisting a variety of charities. Proceeds from the Island Macker will benefit Youth Advantage, which sponsors sports leagues in various towns in Western New York. Currently, Youth Advantage doesn't sponsor teams on the Island, but that is on the "to do" list for the future, according to McGowan.

McGowan admits there has been some opposition to his plans, with "a lot of negativity swirling around."

"One of the main factors getting people riled up was they just didn't have the facts," he said, emphasizing that the event is family-centered and there will be security in place.

He also admits the idea the tournament would bring in minority outsiders might have fueled some of the negativity.

"That is something I personally welcome. Grand Island does not have a drawbridge," he said. "That's the whole idea: Camaraderie and bringing everybody together."

So, who is Corey McGowan? He grew up on Grand Island and is a current resident. A 2007 graduate of Grand Island High School, he went on to Buffalo State College to study business management. He was a pricing analyst for CitiGroup and an in-house promoter for Byblos Niagara before starting his own business about a year ago. Even while working full time for others, he was doing events on the side, he said. His first event on the Island was organizing the Taste of Grand Island in 2012. He also organizes the Taste of Niagara Falls and Concert for a Cure at Canalside. On the Island, he does the free Friday music series and the free movies on Saturday.

Events like the Gus Macker Tournament might encourage people who normally simply cross the Island from bridge to bridge to take one of the exits and hopefully return again to patronize local businesses.

"Businesses here need to use it as a tool," McGowan said, noting that the tournament will add thousands of people in their territory.

Among those heeding this advice will be Dick and Jenny's, Island Deli, McMahon's Family Restaurant, The Baked Cupcakery and Just Pizza -- all will have tents selling food, as will organizations such as St. Stephen R.C. Church (hot dogs) and Grand Island schools (beverages).

Also, each player gets an information bag that will include fliers advertising businesses he or she might like to visit in down time, among them Rocky's Island Pizza, John's Pizza & Subs and Mallwitz's Island Lanes.

So far, the weather forecast for the weekend looks good, McGowan said. However, if Saturday should be a washout, its events will be added to the Sunday schedule. If it rains both days? "With outdoor events you just have to cross your fingers and hope for the best," McGowan said.

McGowan is hoping this year's Macker will be such a success, it will be a welcome addition to next year's Island events.