I propose we make a change: Along with referring to Buffalo as the City of Good Neighbors, I suggest we extend that to Buffalo-Niagara—The Region of Great Neighbors.

I say that because 'tis the season for charitable giving with so many charitable walks, runs, motorcycle and bicycle rides, golf tournaments, raffles, etc. They are all for such great causes; you hate to say "no" when a family member, friend, neighbor or co-worker asks for a pledge or donation to a cause.

You can visit www.foodbankwny.org and join the Food Bank of Western New York's eighth annual Walk Off Hunger Saturday, July 25, at Island Park in Williamsville. If you ride a motorcycle, consider joining our 15th annual Food Bank Motorcycle Run and Benefit Party at the Sunset Bay Beach Club Saturday, Sept. 19. For more information, email [email protected]. Proceeds from both events go directly to the food bank to obtain and distribute much-needed food to more than 110,000 individuals and nearly 40,000 children through 326 member agencies in Cattaraugus, Chautauqua, Erie and Niagara counties.

This Saturday, June 27, I will be celebrating my big 6-0 birthday. Debbie and I decided to start the day by riding in the 20th anniversary of the Ride for Roswell in memory of my dad and Debbie's mom, who both lost their battles with that deadly disease, cancer. We also are riding for others who have either lost their lives or are surviving from cancer, including Kathleen Graim of Tops, who is one of the most inspirational people we know; Dale Anderson of The Buffalo News; Jerry Leone, who founded the journalism program at SUNY Morrisville and was one of my best professors and dear friend; NFL Hall of Fame quarterback Jim Kelly; and my late godfather, Joe Gioele.

We are members of the Tops Friendly Markets team and we will ride the 26-mile course from Roswell Park to Canalside and then head north to the University at Buffalo's north campus. 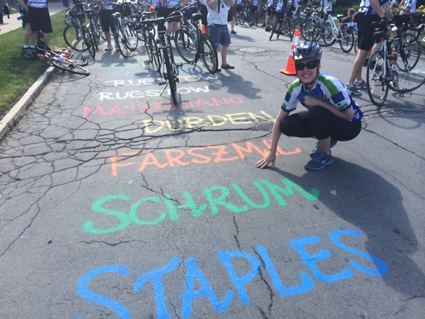 If your philanthropic budget is not exhausted and you would like to donate, please visit www.rideforroswell.com, click donate, and type either Mike name or Deb's. We thank you in advance for helping this great cause.

That evening, we will be attending the fifth annual White Party to benefit the Food Bank of WNY. Held in the spacious backyard of Sue and Eddie Militello in Clarence Center, this event draws more than 600 guests, all dressed in white. The first four years it generated enough funds to help the Food Bank provide more than 1,082,350 meals to those needing food assistance in our community. The hosts of the party, along with the Militellos, are Mary Beth and Jim Basil, Amy and Michael Costanzo, Lisa and Scott Levin and Cheryl and Michael Rossi. If you are interested in attending, visit www.foodbankwny.org.

As I said earlier, there are so many charitable events, but I believe the Ride for Roswell, which local advertising executive Mitch Flynn founded in 1996, is one of the most organized and well-run events in our community. Like all good events, though, it takes a volunteer from the community to step up and make it happen, and that describes Mitch to a tee.

The energetic 64-year-old has been honored this year for his tireless efforts. A statue was dedicated to him in honor of the ride's 20th anniversary and it sits in front of the Roswell campus in the Buffalo-Niagara Medical Campus. In addition, the Erie County commissioner of senior services, Randy Hoak, and Dr. Donald Trump, president and CEO of Roswell Park Cancer Institute, recognized Flynn as the Erie County Department of Senior Services "Senior of the Year."

Mitch has been a rider in the Ride for Roswell each year and he is among the top all-time fundraisers for the event. He also serves on the board of GoBike Buffalo and he regularly rides long distances in our region with several of his pals.

"Whether he is on his bicycle or in the boardroom, Mitch's tireless energy has been a driving force behind the success and longevity of the Ride for Roswell. He serves as an inspiration to riders and volunteers of all ages, and his vivacity and leadership are an incredible asset to Roswell Park Cancer Institute," Trump said when Mitch was honored by the county.

I do not believe Mitch could have imagined the success of the Ride for Roswell when he joined 987 other riders in 1996. There were three routes back then, the longest being 62 miles, and the event raised $101,018, which is a huge success for a first-time event.

To show the amazing success of this event, consider this year's top team is West Herr Automotive with Captain Bill Loecher. The team has already raised $227,359 through June 20.

This year's ride is expected to top last year's number of riders of 8,216 and it should surpass what it raised in 2014: a record $4.4 million. West Herr, led by its president and owner, Scott Bieler, has 147 riders. It does so much for Roswell and many other charities, as well. 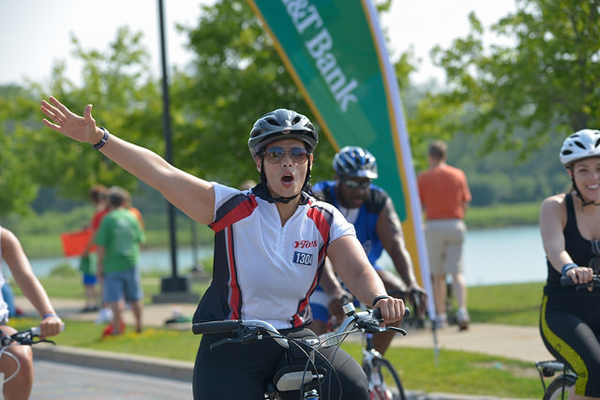 Shown is Margarita Caraballo of the Tops Friendly Markets team.

Our team, Tops Friendly Markets, with Captain Kate, has already raised $35,657 with its 64 riders. Tops is a Big Wheel Sponsor of the Ride for Roswell and it is providing much of the food for the elaborate post-ride party.

Tops, a strong supporter of the Food Bank of WNY, is led by Frank Curci, president and CEO, and Kevin Darrington, chief operating officer. They'll both ride this year. They also made sure all of the extra food and beverages on Saturday will be donated to the Food Bank of WNY.

In addition to the ride, the weekend will kick off with the inspirational and emotional Celebration of Hope Friday, June 26, at UB. It is a rally against cancer and a celebration of survivors, patients and the Roswell Park heroes fighting for a cure. The event is free and open to the public.

On ride day, routes ranging from three miles to 100 miles, will start at the UB North campus while the 44-mile Canada route and the 26-mile Canalside route will start at Roswell. Cyclists of all abilities with all kinds of bikes do the Ride for Roswell, along with many cancer survivors and patients.

As you might imagine, a team of volunteers are recruited to assist on all the routes and they do an outstanding job!

Deb and I chose to Ride for Roswell because the funds raised by the thousands of riders and donors support the cutting-edge research and patient care programs that benefit the 31,000 patients who turn to Roswell for hope. Donations are either used to improve the patient and family experience, support new clinical treatments and procedures or educate the next generation of cancer scientists and clinicians.

Many of my friends at Roswell truly believe there can be a world without cancer. They believe a cancer-free tomorrow is not only possible, but also a reality. Roswell is already closing in on the several hundred diseases we call cancer. Its "dream teams" of cancer researchers and clinicians are among those leading a biomedical revolution, making headway and headlines on every cancer front. The staff is truly making a difference in the lives of those battling cancer.

"Money that was raised through events like The Ride For Roswell have allowed my colleagues and me to develop a first-of-its-kind cancer vaccine, SurVaxM," explained Dr. Robert Fenstermaker, chair of the department of neurosurgery and director of the neuro-oncology program at Roswell. "The vaccine targets a protein, survivin, that helps cancer cells stay alive and is associated with aggressive types of cancer. We have just completed testing the vaccine in brain cancer patients during a phase one trial, and the vaccine showed great promise. Now, we are moving on to phase two. But, without the initial support from our donors and fundraisers, this project would never have gotten off the ground. Thank you for your support."

Dr. Grace Dy, associate professor of oncology, is also appreciative of the funds raised at the Ride for Roswell.

"Thanks to the Ride For Roswell participants, I recently received funding for a new research project," she said. "These research grants are awarded after an internal, peer-reviewed competition, and only the most promising early-stage projects receive funding. My study will focus on molecular changes that may cause lung patients to not respond to cancer treatment. Long term, we hope to find ways to correct or compensate for those changes so that more lives can be saved."

And the stories from the doctors and researchers go on and on proving every gift to Roswell Park makes a difference, and makes a meaningful contribution toward finding cancer cures and saving lives.

One of two men and one in three women will hear the words, "You have cancer," at some point in their lifetime. The research at Roswell will hopefully find a cure for this disease and that is why Deb and I are riding this year and hopefully every year forward. For all of you who have donated to the Ride for Roswell, thank you. 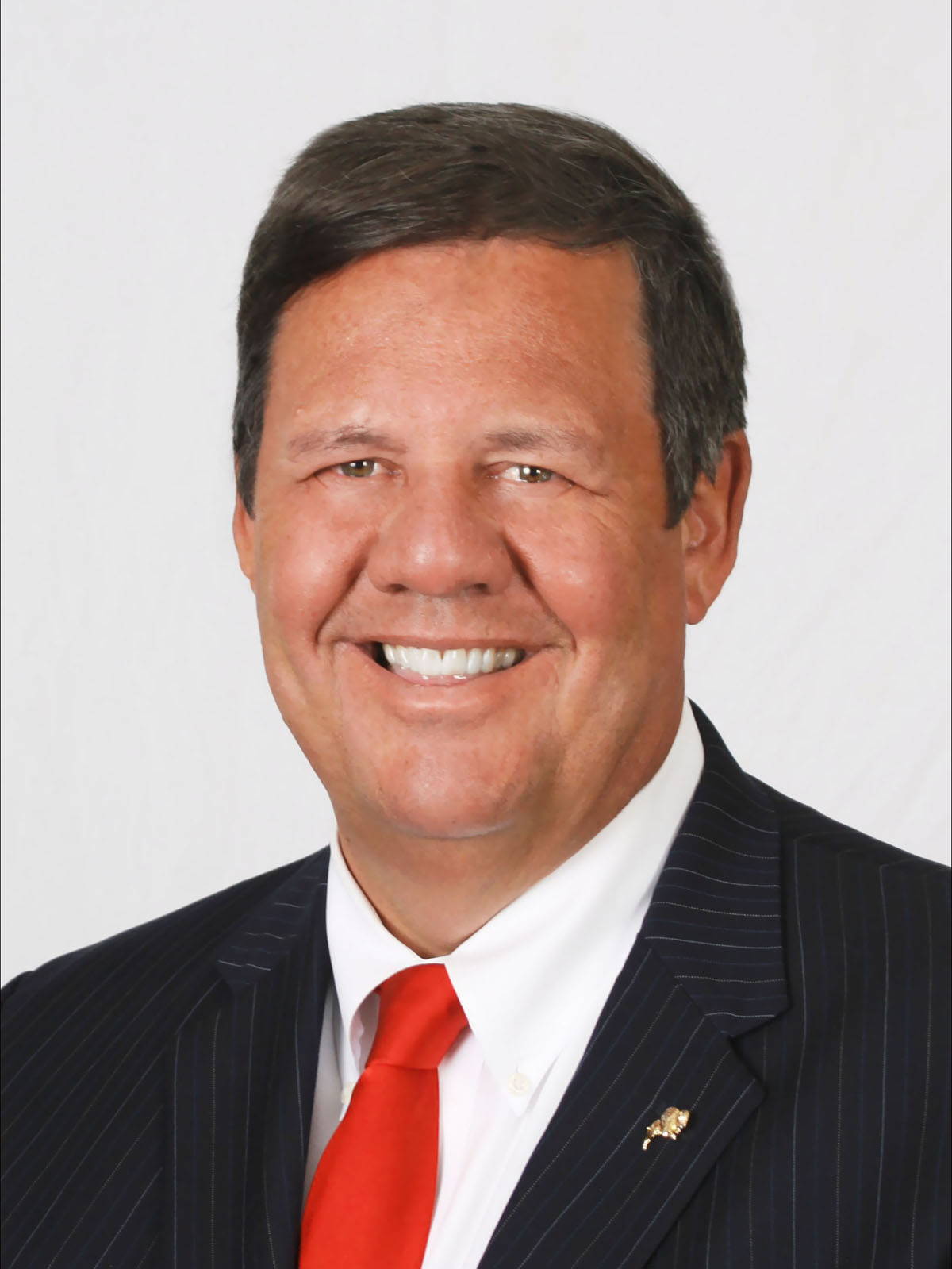 Mike Billoni, a former award-winning sports writer for the Tonawanda News, Buffalo Courier-Express and Rochester Democrat and Chronicle, also is the former vice president/general manager of the Buffalo Bisons under Bob and Mindy Rich. He is a freelance writer for Niagara Frontier Publications.

Billoni can be reached at [email protected].

He and his wife, Debbie, reside on Grand Island.