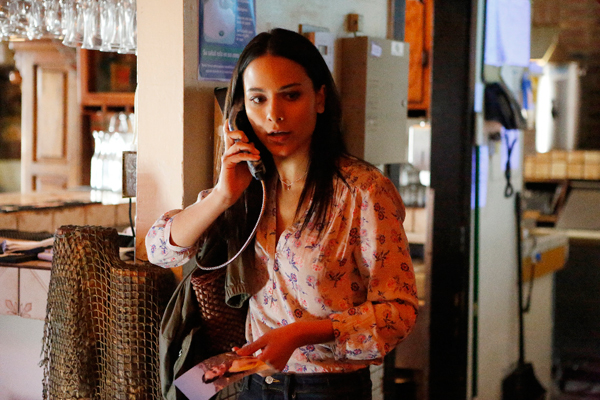 "Marvel's Agents of S.H.I.E.L.D." episode "The Frenemy of My Enemy": Can Kara (Maya Stojan) be trusted? (ABC photo by Kelsey McNeal)

Maya Stojan is making a compelling case to become the Comic-Con poster girl.

When you think about what fans want - what made Scarlett Johansson, Zoe Saldana and Yvonne Strahovski stars - not many actresses can check as many boxes as Stojan.

Is she authentic - can the actress make us believe in the world she's creating? Yes.

Is she mysterious? Can she leave us wondering the true nature of her intentions? Yes.

Is she capable of kicking butt on screen? Yes.

The added bonus? She's got movie-star good looks and spends time with both Phil Coulson and Nathan Fillion.

And talk about range. Stojan has become a key figure this season on ABC's hit shows "Marvel's Agents of S.H.I.E.L.D." (sci-fi) and "Castle" (procedural).

As Kara, aka "Agent 33," on "S.H.I.E.L.D.," Stojan toys with fans' emotions as she flip-flops between loveable and loathsome. Agent 33 is a former S.H.I.E.L.D. agent emotionally crushed into compliance by HYDRA. In that capacity, 33 stole agent Melinda May's face (it's a long story) and then aligned herself with S.H.I.E.L.D. turncoat Grant Ward. Just last week, the dastardly dynamic duo kidnapped agent Bobbi Morse.

Stojan spoke to BTS on the eve of the season finale for both shows.

BTS: I saw a picture of you with "S.H.I.E.L.D." co-star (and "Battlestar Galactica" lead) Edward James Olmos and thought, "You have the coolest job."

Maya Stojan: It's a very cool job; I'm not going to lie (laughs).

BTS: You tweet a lot about both shows. I think one of best parts about being a modern-day actor is the ability to interact this way with fans.

Maya Stojan: I really do enjoy that part of it.

It's just wonderful. Most of them are so loving and so supportive and love the shows that I'm on - and have grown to love me and those two different characters that I play. ... It's just really fantastic.

BTS: You're working on two hit shows. Tell me about the past year - both creatively and in terms of juggling the two recurring roles.

Maya Stojan: It's been probably the best time of my life. It's been incredibly busy. At times, quite stressful. But, for the most part, it's just been wonderful that they've been able to work my schedules out.

It's been just wonderful. I guess I'm just so blessed that they wanted to keep having me back. Because with recurrings, you just never know sort of when you're going to come back. It's not like there's that big schedule. So, every time an episode ends, you're sort of praying for that phone call for the next episode.

It just really worked out brilliantly. I think I was able to work on every episode that I was offered, which is really awesome considering I had to juggle both of them. But they're so nice on each show, and there's really nothing bad to say about either of the shows. It's really great.

BTS: Tell me about bringing these two different characters to life.

Maya Stojan: With Tory Ellis on "Castle," that was supposed to be a one-day guest star, and my name was supposed to be "Video Tech Expert," or something like that. First of all, I didn't picture myself doing that role, and sort of went into the audition thinking, "Yeah, that's definitely not going to be me." I'm so not a tech expert. I have trouble using my phone. Someone fixes my TV whenever it doesn't work. Things like that.

Somehow, they loved it, and I was definitely surprised when I got the phone call. I did that first episode and they kept wanting me back. And now it's 26 episodes into it, and it's just, I feel, sort of like a miracle.

As far as the character goes, you know, she loves her job; she's to the point; very professional. It's definitely a side of me that I have. I think I'm a very hardworking person. I brought that into her character.

Also, I think, as time went on, I felt more comfortable with the role. Maybe at first I was just slightly nervous being a part of this ensemble, and they were, obviously, all just so nice to me. But still, you want to do really good, because you want to keep coming back as a recurring.

But then, just recently even, just the last four or five episodes, I really just settled in and kind of went, "Yeah, I'm just going to have fun now." I think maybe that'll show more.

As Kara, Agent 33 on "Agents of S.H.I.E.L.D.," I really didn't know what was going to happen, because they're so secretive. I think that's what's so great about the show, is that they don't give away anything, and they're very careful about what they even give to us and tell us. That's the magic of Marvel.

But as far as her character, you know, it's so difficult, because, even now, people think, "Is she evil?" "Is she good?" And I've learned through asking that you never want to see your character as bad or as evil.

And, yeah, I really sort of connected with her in a lot of ways - which sounds kind of psychotic, when you think about it (laughs). ...

That love/romance that she has with Ward, and just how they're very connected, and, through it all, they just - she just stands by him. No one knows if she's been brainwashed or not, but she's really, I think, trying to find herself - whether it's good or bad. She truly believes in that one man, and she's going to follow him. But she's also very strong.

(With regard to Kara's work in Bobbi's kidnapping - just when we thought 33 was turning back to S.H.I.E.L.D. - Stojan said fan reaction was intense.) I think that's why I betrayed so many people - at least I found out on Twitter - is because of the fact I didn't play her evil, and I played her with a sort of vulnerability - and I hope that showed. If I had played her sort of mean and evil from the start, I don't think people would've been so upset.

Working on "Agents of S.H.I.E.L.D." is also just a dream come true. Being a Marvel character, I mean, I couldn't have hoped for anything better. It was just a complete dream.

BTS: Yeah, Marvel is the biggest thing in this industry. Tell me about becoming part of the "universe."

Maya Stojan: It's so cool. There's no other way to put it. It gives me the chills just thinking about it, because it's something that you look up to as a kid. It's just such a different - it's a whole universe and, yeah, it's so badass. And I love the mythology that comes behind it. 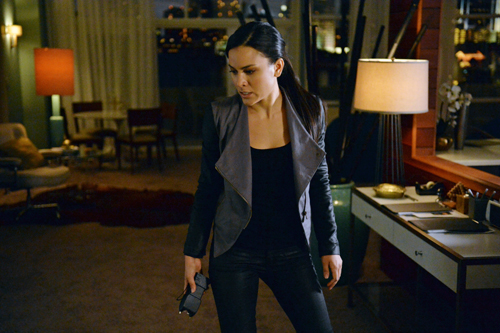 (Kara) is a really smart, smart woman. It's kind of great that I get to play these two women that are not necessarily your typical female - all pretty and sort of glam. These two characters, one of them is quite nerdy and the other one is this badass chick who fights.

To me, it's a very, very special thing. It's a thing that I'll be a part of no matter what happens. ... It's a dream come true.

BTS: You're working with two large casts. You're surrounded with talented actors who have been very successful within this business. What have you learned from your co-stars?

Maya Stojan: I've learned so much, and, honestly, one thing that I've learned, I think, over that period of time, is to really relax. I'm the type of person that wants to do everything right and that wants to be, sort of, just A-plus student on set. I've realized that that can kind of hurt you sometimes - in your acting. Obviously, I'm very professional. I'm always nice to everyone on set - try to be, at least. But, as far as my acting goes, I think allowing myself to make mistakes - I've realized that even the biggest of stars and the most successful actors make mistakes. And that's how you grow, and that's how you create your character, just by sort of trial and error, and seeing what works.

BTS: I hope we see you for many more seasons on both series. In addition to these shows, what would you like to try your hand at?

What's really cool is the character that you play, for me. Anything that's sort of a challenge and that sort of pushes me outside of my box is always awesome.

It'd be fun to play a glamorous, pretty girl on some show! But it's nice to play character stuff - and sort of deeper characters that have a lot of emotional stuff to dig into.

•Joshua Maloni writes about television shows including "Grimm," "The Voice," "The Blacklist" and "Bones." Follow him on Twitter @joshuamaloni.