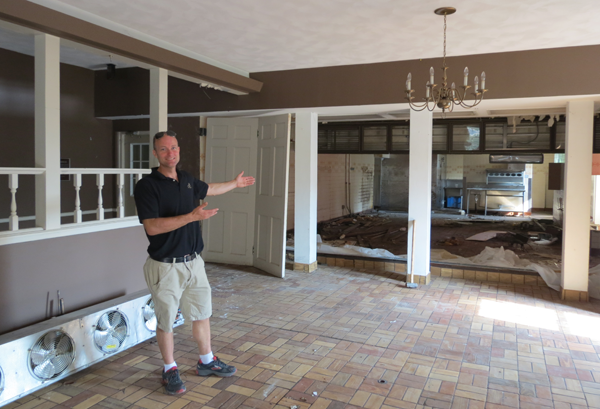 Alan Hastings stands inside the Frontier House in this 2013 file photo. The Town of Lewiston is considering purchasing the building from Alan's father, Richard.

Frontier House: What to do with Lewiston's historic 'crown jewel'

If the Town of Lewiston is successful in purchasing the Frontier House, what would happen next? What would go inside Center Street's centerpiece?

"I plan on forming a committee, and it's going to have engineers, historians, local business people ... people from the Village Board - the trustees, the mayor himself," Supervisor Dennis Brochey said. "We have to put our heads together and work on this together - on what's the most viable use for this. We have to come up with a way that, once it's all set and done, we don't want a burden on the taxpayers.

"We want to make sure that there's some sort of income coming from it. Although that's going to be limited, because we can't use it for retail whatsoever. But it's my understanding that we could possibly do offices up there, as long as people don't go there as a retail type of thing."

Town Board members unanimously voted Monday to spend $2,200 with GAR Associates Inc. of Amherst for an appraisal of the nearly 200-year-old building and its surrounding property. Frontier House owner Richard Hastings has had several conversations with Brochey regarding a possible sale.

"It's definitely an eyesore right now, but, gosh, I can see the beauty in it later on. But the main thing now is to get the appraisal - (to) work out an agreement with the Hastings on a good price that's going to make the people of Lewiston happy, and the Hastings (too)."

Brochey likened the Frontier House to Boldt Castle in the 1,000 Islands. The Alexandria Bay building was erected in 1900 as a tribute to Waldorf Astoria proprietor George C. Boldt's wife, Louise. Construction continued until 1904 when Louise unexpectedly passed. George didn't have the stomach to carry on with the castle, and so it sat vacant for 73 years.

Today, "They have boat rides going out there, and they charge admission," Brochey said. "They're slowly going one room at a time restoring this big, huge castle. It's beautiful. I've been there two or three times and, each time I go there, there's something new being done - and the money (is) coming in.

"Is it possible that we could charge admissions and stuff like that to get people to help pay for the (Frontier House) restoration? We've got to look into everything. You can't leave any stone unturned.

"I'm kind of excited about it."

Stacey Sheehan, business development consultant and project manager for The Frontier House acquisition, said, "I know how Supervisor Brochey feels about this, and both the Hastings family and I have a tremendous respect for him. He has vision, courage and maturity, and it's evidenced by the way he is ready to extend his responsibility not only to those he represents now, but beyond into the future by looking ahead to how Lewiston residents and visitors to our area will benefit from this acquisition for decades to come. He identifies that the Frontier House is a lot more than a piece of real estate or an old stone building. It's a priceless part of who we are - a piece of the body of Lewiston. I hope the board shares this sentiment (and) will support his efforts, and that the purchase will go smoothly."

Brochey said the Hastings family has been "wonderful" to work with, and said he's never had a problem with Richard.

"We would just talk back and forth like that," Brochey said. "And then, every once in a while - not every time - but every once in a while, somehow, the Frontier House would be brought in. I said, 'You know, we ought to chat about that some day.' And he would come up with his idea: 'You know what, Dennis, I would love to see that restored - just the way it used to be 200 years ago.' I said, 'Oh, that's the same thought I had in mind, too.' "

Brochey said the Town of Lewiston would rely on Greenway money to purchase the Frontier House. The Greenway Commission's mission is "To continue and advance the state's commitment to the preservation, enhancement and development of the world-renowned scenic, natural, historic, cultural and recreational resources of the Niagara River ... while continuing to emphasize economic development activities."

Richard Soluri is vice chairman of the Greenway Commission. He served as mayor of the Village of Lewiston for 15 years, and is all too familiar with the Frontier House.

"I'm pleased with (the Town Board's) first step to secure an appraisal," he said. "And I hope all parties cooperate fully."

As a Greenway commissioner, "I would just like to see that building open," Soluri said.

"We have a very good downtown; a very good Center Street. But this would make it the focal point of a good downtown right now," he added. "You need to retain the historic uniqueness of it. I'm not certain, depending on what grants are received and where the ownership goes, but one thing I would like to see them do is sell all New York state products. And it's a natural to be part of the Niagara Wine Trail. The governor's helped out craft breweries, and that was Alan (Hastings') original idea.

"The farm produce that we have in our area is unique. The festivals. We have the history. Between the arts society, historic society and all the uniqueness of those organizations - including Peach (Festival), which honors the fruit-growing region; Jazz (Festival), which ties in totally with Artpark - I think the building would have to have multi uses."

Brochey said, "We have to come up with a cure for the overhead. Because once it's all said and done, it's going to have electricity, gas, water. So we've got to make sure that it doesn't cost anybody anything. It would be a true jewel for everybody then."

Soluri said the Greenway Commission has not discussed the Frontier House in his seven months of service, but he noted, "We are one of the very most historic communities on the Greenway."

"The river is an integral part," he said. "We've honored the Underground Railroad there. We've had different projects such as The Silo, the Whirlpool Jet Boat. ... I don't think there's any question that it could be a Greenway project. The more we can tie it to the river - to the Greenway - the better.

"It probably needs some type of exhibit that leans towards fishing and boating, etc. And we have a history of boating from many years ago. The reason it was called Lewiston Landing way back when ... was because of the ships that used to come in and out of Lewiston."

Sheehan said, "The town has access to specific funds that the Hastings family can't reach as private businessmen - various grants, Greenway funds, bonds. It is a good fit, because Lewiston has the reach - the funding and the manpower at their fingertips - and can do this with little or no taxpayer money coming into play. They are the perfect buyer for this historic property."