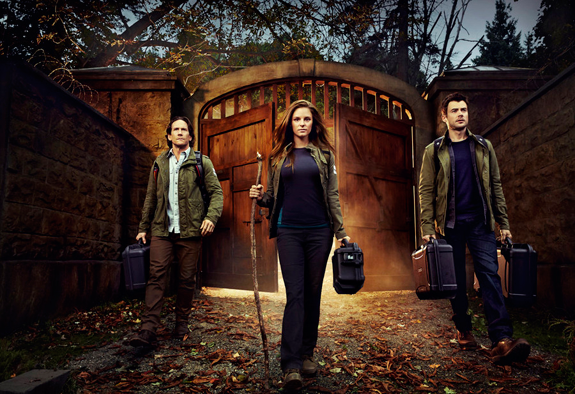 The second season of "Helix" debuted Friday with two "what the hell?" moments the Syfy Channel imaginatively hashtagged #WhatTheHelix.

Dressed in a protective white suit, Dr. Farragut was leading the Center for Disease Control team on board a deserted ship filled with dead, seemingly contaminated crewmembers. ... But it wasn't Alan Farragut (Billy Campbell), who led a team into the arctic in season one to battle a NARVIK outbreak. Rather, it was his brother, Peter (Neil Napier).

The crazy, infected monster from season one was cured, back at work, and investigating a new outbreak with (of all people) Dr. Sarah Jordan (Jordan Hayes), who may or may not have a child with Alan - who was nowhere to be found.

Napier spoke of the transformation, saying, "Season one and season two - I kind of went through pretty different preparation. Season one was - there's really, like, a pretty serious application of my imagination, because I have no kind of frame of reference what it is to be a vector and to be sick with NARVIK. So there was a lot of - a lot of play in imagination in that. And what was important to me was to keep my thumb on the man underneath the monster, if you will, to really, you know, make sure that Peter retained his humanity throughout what was going on.

"And as we came out of the end of season one, we see, you know, Peter's cured. I don't know how much residual effect from his ordeal in season one is carried through (into) season two - I mean, I know, but I'm not telling you. And - but spiritually and emotionally, mentally, there's a lot of baggage that carries over from season one into season two, and I used a lot in season two - the preparation looking back to the journey that Peter had been on up to this point and informs where we're going."

Equally surprising in the season premiere: Dr. Julia Walker (Kyra Zagorsky) was manning a storyline 30 years into the future.

At first it appeared as if Julia was on the same island Peter, Sarah and newcomer Dr. Kyle Sommer (Matt Long) traveled to in search of the boat infection's source. As it turned out, she was on the island, but three decades after the other scientists arrived.

Upon becoming near-immortal in season one, Julia hasn't aged. But she said she's dying - as are the other immortals - and in search of a cure.

Showrunner Steven Maeda said the plot twist was created because "we wanted to be able to actually see immortality, which is a very difficult thing to see when you stay in the present. And so that kind of spun the whole idea of this Walker timeline. And, you know, this season we decided to play with structure, as well, and kind of use - you know, we're going to see Walker in the future; we're going to see Walker in the present; we may even be doing some flashbacks. So, we really wanted to play with time and play with immortality in a visual way."

The source of the illness seems to be tied to a mysterious cult guided by Brother Michael (Steven Weber) and his followers ... one of whom is (surprise!) Alan Farragut. In the midst of this remote island, amongst a band of evil, murderous zealots, Alan has discovered the cult is working with (you guessed it) the Ilaria Corp., which created the NARVIK virus.

Talk about one jam-packed, fast-paced, edge-of-your-recliner season premiere. It's no wonder fans were left tweeting #WhatTheHelix. 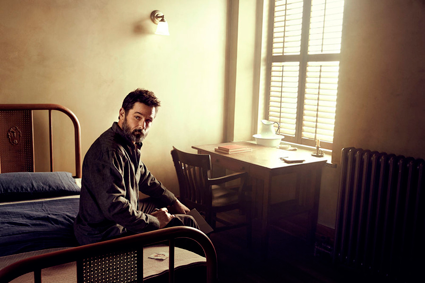 What is Dr. Alan Farragut (Billy Campbell) up to?