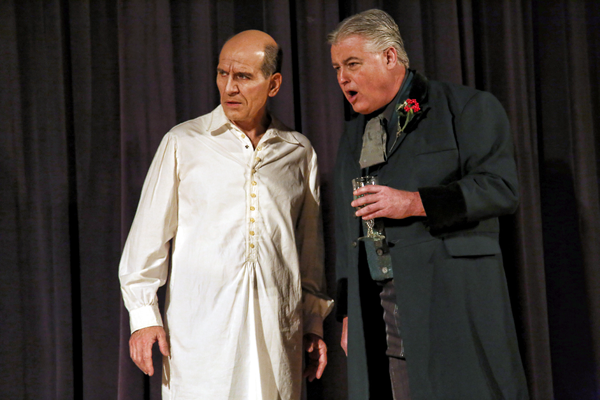 Sherlock (Jack Agugliaro) with the Ghost of Christmas Present (Mark Gravel of Wheatfield).

As Sherlock Holmes would say, "It's elementary."

Pairing the world famous detective created by Sir Arthur Conan Doyle with spirits from Dickens' "A Christmas Carol" has brought Theatre in the Mist another eggnog salute for its annual holiday play at Lewiston's Stella Niagara Education Park. "Sherlock Holmes and the Case of the Christmas Carol" not only has Sherlock, Dr. John Watson and ghostly nighttime visitors, but a grown-up Uncle Tim, plus a nod to the World War I Christmas truce of 1914 when the allied soldiers and their German foes called an impromptu peace to bury their dead and celebrate the holidays.

"We like Sherlock Holmes and we love doing Christmas shows. When we found out it's exactly 100 years since that Christmas truce, it all kind of fell into place," said Barb Zubler of Lewiston, who is not only producer and stage manager, but also the voice of Violet Holmes, and who plays the cackling burial watcher Vera.

Jack Agugliaro, a Kenmore resident who works in North Tonawanda, dominates the stage as Sherlock. The detective surprisingly survived that final deadly conflict with Moriarty at Reichenbach Falls, but he is a changed man, and not for the better. Agugliaro is a director's dream - he is the director. When asked to direct the play, he said, "I told them I'd honestly rather be Sherlock than direct. They told me, well, you can do both."

You will enjoy picking out famous Sherlock lines, as well as watching Agugliaro's facial reactions as his character meets the spirits of past, present and future.

"We're having a ball with it," he said of the play.

Many of the characters are Theatre in the Mist veterans, and some were part of the group's award-winning musical this fall, "Fiddler on the Roof," at Niagara Falls High School. Several cast members juggle multiple roles.

In this production, Grand Island's Elliott Michki plays Young Holmes, Eli, Wiggins and a German soldier. Michki, who was also in "Fiddler," learns not only his own lines, but tries to learn his castmates' lines as well. It's not affecting his grades at SUNY Buffalo State, where he is a freshman in music education; he's getting straight As.

"This is more of a stress reliever for me," he said of his acting.

Mark Gravel of Wheatfield plays Professor Moriarty, the Second Spirit and The Professor in this, his fourth Christmas show at Stella. A friend who was involved with Theatre in the Mist when it was first formed persuaded him to try out for a show. "I got hooked," said the now-veteran of theaters both here and in Buffalo.

The end of the play is a given. Like Scrooge, Sherlock is a reformed character, despite being unappreciative of fruitcake as a gift, but he does don a deerstalker hat. He vows, " I can change. I will change. I am Sherlock Holmes!"

The opening night audience was appreciative of the cast's efforts. The main complaint seemed to be from people who had checked their coats before being seated. Be warned. Stella's elderly theater is a bit drafty. The only other complaint overheard was from two women seated beside me who debated whether the microphones weren't loud enough or the British accents were confusing. Guess they hadn't watched enough PBS or BBC shows; I had no problem.

So, bring a warm coat and tune in to some public television before you come, but do catch some Christmas spirit this weekend at "Sherlock Holmes and the Case of the Christmas Carol." 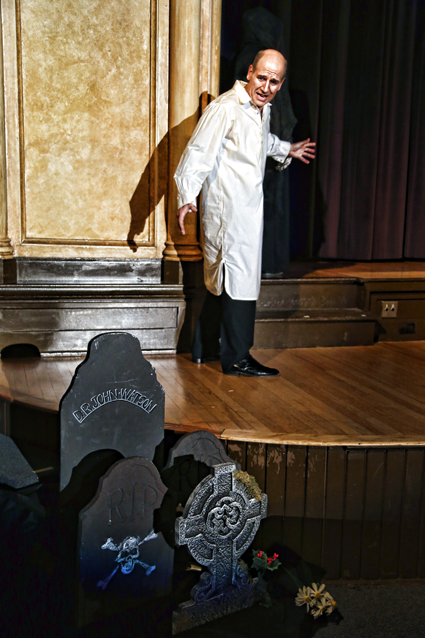 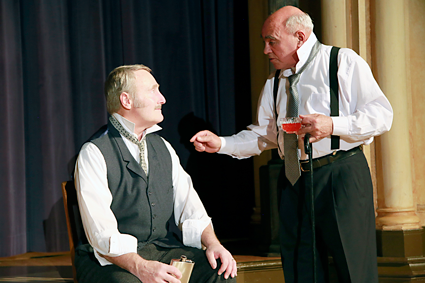