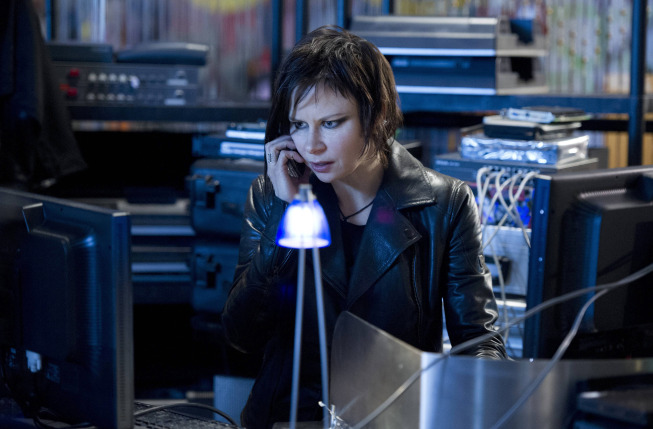 "Dammit, Chloe!" What is with the Goth look?

"24" fans were ecstatic when FOX announced it was bringing the show back for a limited-run series.

They were elated Jack Bauer would return, once more, to save the day.

And, they were, well, curious about Chloe's new look.

When "24" fans first met Chloe (Mary Lynn Rajskub) in season three, she was a straight-laced, no-nonsense computer programmer. Throughout her time on the show, she became a confidant and friend to Jack Bauer (Kiefer Sutherland). When the series ended, Chloe had risen to the top of the Counter Terrorism Unit - and in that position, she turned a blind eye as Jack, wanted by the U.S. government, escaped to freedom.

When Rajskub received her first two scripts, "First of all, when I read them, they were very exciting and read like classic '24' scripts," she said. "And I kind of hopped up at the ends of reading two of them and then I was like, 'Wow, I want to know what happens next.'

"So, I met with the hair and wardrobe and makeup, and we just had a great few days of coming up with this idea for this character. So, I did it with that team, and then we presented it to the producers and everybody and sort of took it from there."

Chloe's new wardrobe is representative of what's happened in her life. She was forced from CTU and subject to criminal charges because she let Jack flee. Following that, Chloe's husband and young son were killed in a car crash meant for her, and she lost track of Jack.

"She is really in a lot of pain, and kind of just holding on," Rajskub said.

Chloe is reunited with Jack, who rescues her from the London CIA station. The two decide to help save President James Heller (William Devane), even though his government seeks their capture.

"I feel like Chloe this time around has been more dragged to the dark side, for lack of a better description, where she's now part of ... trying to always save the world and deal with these larger-than-life intense situations," Rajskub said.

Fans might be shocked to see this new version of Chloe. Rajskub, herself, was stunned to learn there would be any version of her character on TV again. She was surprised to learn FOX was bringing back its Emmy-winning series (and Chloe, too).

"I was very shocked when I found out, because I had moved on with my life," Rajskub said. "It had been four years, and so I spent a few days with my husband and my child and my dogs walking around (in) my pajamas going, 'What is happening?' Kind of not believing it and watching my Twitter feed blow up. And I responded, like, 'We're very excited.' Meanwhile, I was waiting for them to actually pick up the phone and call and ask me to be involved. And, of course, I said 'yes' without hesitation. How could I not?"

"I never thought this would come back," Rajskub said. "It was a once-in-a-lifetime thing that is now twice in a lifetime."

"24: Live Another Day" continues Monday at 9 p.m. on FOX. For more information on the show, visit http://www.fox.com/24-live-another-day/.