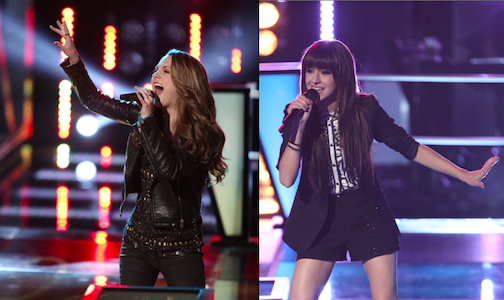 It was on the first season six episode of "The Voice" that we met Bria Kelly and Christina Grimmie, two singers with the pipes and personality to win NBC's hit singing competition. It would be nine and 10 episodes, respectively, before we'd see them perform a second time. In that span, many promising performers took to the stage to make a case for the crown, but none matched these two standouts.

After winning their first "Battle Round," Bria and Christina are just one round away from competing on the live shows, where the audience will decide which singer (or group) will win "The Voice."

Last Monday, we watched Bria square off against Tess Boyer for Team Usher. The singers were asked to pair up on the iconic Janis Joplin's "Piece of My Heart."

Seemingly, the song would be right up Bria's alley. She is, of course, a gritty, Janis-style rock singer with a powerful voice and a strong stage presence. But Bria seemed a little uneasy sharing the song with Tess, a former NFL cheerleader.

"It's not necessarily the fact that it was difficult. It was different and I really, really enjoyed getting the opportunity to be able to just make a kickass performance."

Usher chose Bria to continue on in the competition. He said, "I think that Bria, ultimately, connected to the song more than Tess. And I think we can go far."

"As far as ability to sing, there's something about Bria. And I am so terrified of Team Usher, right now, because of you," coach Adam Levine told Bria.

Bria said the first "Battle Round" prepared her for the second duet-duel, which already taped and will air in coming episodes.

"It really helped to know that I was - I started off singing the song, like, definitely with my tough-face façade that I have," she said. "You know, obviously, I come off like I'm really badass. But for this song, I definitely had to become a little bit more vulnerable onstage. And, I, I mean, I didn't have my guitar, so I had to, like, move around. But basically, vulnerability is a key thing that I took away from all of the, all of the feedback, all of the comments that I got from (mentor Jill Scott) and Usher. (It) was definitely just being able to open myself up."

Pop-R&B artist Christina's first "Battle" was montaged Tuesday, meaning we only saw a few moments of the matchup. Christina's coach, Adam, said she only scratched the surface of her potential.

Describing the performance, Christina told BTS, "I battled Joshua Howard. And our song was 'I Knew You Were Trouble' by Taylor Swift.

"Our battle was interesting, because it was a little more cutout for me more so than Josh Howard. However, I don't think that I particularly did the song any, like, major justice. And you know we - I think we came together at the end. At the end of the day, we had a great show and it was fun.

"And Adam, you know, like he said he saw potential in me. And I can't be any more grateful for that. But you know the fact that I was showed for even a second was kind of a blessing, still. So, it was a good battle, overall, I have to say."

Like Bria, Christina said her first "Battle Round" performance made her a stronger competitor. She said her next TV appearance will reveal more of who she is as a singer.

"And it's always a little tougher with another person. But that fact there's a little more energy there I just - you know it's a great time. It's a little different than performing just by yourself. But that's what makes it special."

UPDATE: Christina did, in fact, rebound in her second "Battle Round" performance. In a tight matchup Monday, she bested the quirky and talented Sam Behymer on their version of "Counting Stars." Christina owned the stage and proved she has the vocal prowess to win "The Voice."

Coach Blake Shelton called Christina "a ball of fire" and "a stick of dynamite."