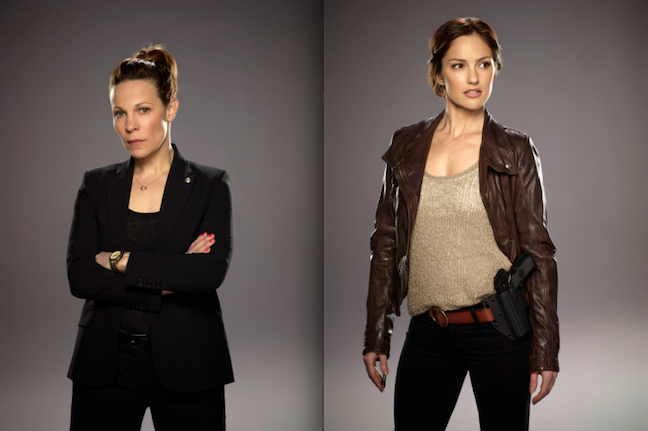 Lily Taylor and Minka Kelly star in "Almost Human," which airs Mondays at 8 p.m. on FOX. (photos by Kharen Hill/FOX)

When it comes to science fiction storytelling, no one is better than J.J. Abrams.

He has given new life to "Star Trek" and "Star Wars," and his Bad Robot production company shaped iconic TV fan favorites "Fringe" and "Lost."

Now, Team J.J. is hard at work on "Almost Human," a half-man, half-machine "buddy cop" thriller airing on FOX. Like other Abrams works, this show is smart, suspenseful and, at times, really funny. It's hands-down one of the television season's best new shows.

But, if "Almost Human" is to live long and prosper in today's fractured TV viewing world, it will need more than sci-fi fans. "Almost Human" must appeal to a wider group of people if it is to earn a second season.

Just what will motivate viewers to tune in each Monday at 8 p.m.? To the non-sci-fi faithful, I offer the following: Lili Taylor and Minka Kelly.

Can't tell a Jedi from a Sith? Never imagined time travel or a smoke monster? No problem! Taylor made her bones in romantic comedies "Mystic Pizza" and "Say Anything," while Kelly scored with "Friday Night Lights" and brought sunshine to "(500) Days of Summer." Their work on screen not only makes "Almost Human" well-rounded, but also worth a look regardless of one's TV tastes.

"Well, for me it was kind of interesting, because Maldonado was originally written as a man. And my manager suggested, 'What if you thought of Maldonado as a women, and what if it was Lili?' " Taylor said. "And they were open to that. And I went in and I read, and I think it felt really like an interesting way to go for everybody. I was interested because of J.J. and (showrunner) Joel (Wyman), and they are very creative and they have a lot of creative autonomy, as well. So all that combined made it interesting for me to join up."

"Almost Human" takes place 35 years into the future. The crime rate has risen 400 percent, forcing police officers to pair with synthetic partners. The series centers on Det. John Kennex (Karl Urban), who is ambushed and left for dead in the pilot episode.

When Kennex returns to the force, reluctantly, and with both a robotic leg and an android partner, Dorian (Michael Ealy), it's Maldonado who reminds him of his humanity and encourages him to reclaim his life.

"Well, I think one thing that's specific to Maldonado and Kennex is that they share a bond, because they went through a tragedy together, and I think that's just something that just seals the bond between two people," Taylor said. "And then secondly, though, I think Maldonado really appreciates the way Kennex, you know, thinks outside the box. And it's frustrating, but it's also what makes him special, because he's sort of the renegade - a maverick, and intuitive, and risk-taking - and then that's also his blessing and his curse. But especially these days, with the robotic nature of things, that the more kind of someone who's a little bit, like, unpredictable, for me is important."

Kelly was a recurring character on NBC's "Parenthood," and more recently played Jacqueline Kennedy in "Lee Daniels' The Butler."

"I was one of the last ones to be cast, and I auditioned, and then a couple of days later I was flying out to Vancouver to shoot the pilot," she said. "I also was attracted to it because of the people making it: J.J. and Joel. I'm big fans of theirs, and I just had a strong feeling it would be something very interesting with these guys, just because they're so smart and creative, and also the cast. The cast was already set in place, and so I was really excited for the opportunity to work with these people."

On "Almost Human," Kelly stars as Det. Valerie Stahl, an intuitive cop with a soft spot for Kennex.

"As far as my character goes, as you see in the pilot, she meets him for the first time, but she's known of him for years and has been waiting for him to wake up, because she's just been such a huge fan of his," Kelly said. "And when it comes to sort of sticking up for him, she has a real strong compassion for all beings, but especially for him, just because she holds him in such high regard. And so she's just always admired him and looked up to him."

One of the storylines that could appeal to non-sci-fi fans is a Kennex-Stahl romance. Kelly teased the idea of such a relationship.

"I think they're sort of flirting with the idea, but I don't know how long that may or may not take to actually act on," she said. "But right now, maybe, they're just having a little mutual admiration, I guess."

While the female leads are good reason to watch "Almost Human," Taylor said it's the male leads who will resonate with fans and viewers as they explore what it means to be human.

"Well, here's the thing: It's the first season, and so the focus really has to go on Kennex and Dorian," she said. "And so, in some ways it's like, I think if the show gets picked up and does well, I think that all the other characters - the more supporting characters - it's going to be the second season where their stuff is going to come out. But overall for me what's it's been is just, like, more just watching the development of the relationship between Kennex and Dorian, and how that has become much more poignant. They push each other's buttons, and what comes out of it is this friction ... this poignancy ... and a humor that I hadn't really seen. I didn't know it was going to be to that extent, but I've seen it happen as the episodes have gone on. So, that's been one of the main things that I think people are going to find interesting as they view the shows."