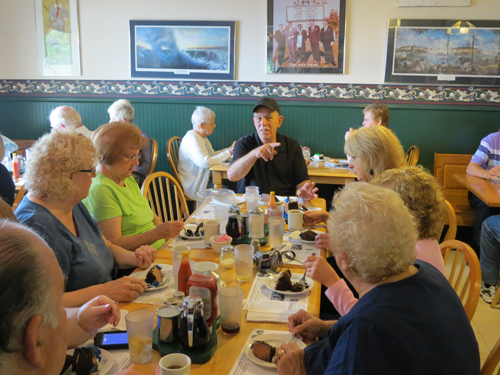 Tom George sits with diners at The Villa Coffee House.

Village of Lewiston: Tom George calls it a career

George has reached a point, he said, where, "I just can't be on my feet 10 hours a day, every day, anymore. It's just impossible, and I don't want anybody else to be running the place while I'm here."

So, George sold the business to Mike Loraine, who worked with him the last two weeks of September.

"Everything's the same, except Tommy's not going to be here," Loraine said.

"He's cooking everything the same way we did; all my girls are staying. So, it should be pretty much the same," George said.

While the menu and the wait staff may remain intact, customer Nia Swensson said she'll miss the atmosphere.

"With all his memorabilia and all his stories," she said, "you just feel like home when you walk in."

Swensson, who participates in SilverSneakers classes across the street at ChrisFit, said, "Every Monday, Wednesday and Friday, we go there as a group for lunch. It's like a regular thing. And he has a table ready for us, and we all sit down; he comes over and talks to each one of us. And it's wonderful, absolutely wonderful. We're going to miss him so much. We're still going to go, but it just won't be the same."

"It's his personality that draws everybody to that restaurant," she said. "It's because of his relationships with everybody. That's why we go there instead of going someplace else, because of the personal relationships we have with him."

Week in and week out, "Tommy George's," as it's often called, is packed with customers drinking coffee at the counter and eating pancakes in the dining room. One familiar face each Saturday is former Village of Lewiston Mayor Richard Soluri.

"I, probably, you know, along with some others, was one of the original customers there," he said. "Interesting enough, there were other guys that started to join me for Saturday morning coffee - Tom Baia, Bill Mayne, Henry Sloma - there was a bunch over the years. We've been having breakfast there every Saturday morning - some of the players changed, like (Ron) Winkley's part of it - for, Tommy always reminded me, for over 35 years."

"It was always a joy to go in, because the food was delicious," he said. "Tom, believe it or not, was a joy (laughs). He joined us many times for breakfast."

Soluri said he and George have become close friends.

"When I became mayor, he put up a plaque at the table where the counter is, by the partition, as you walk in," he said. "That table was reserved for Mayor Dick Soluri.

Soluri pointed out George's memorial wall, which sits kitty-corner to the cash register and serves as a tribute to deceased friends and family members.

"He was a guy with a very big heart," Soluri said. "He had a lot of true-blue friends, and many of them passed away over the years. He was an extremely sentimental guy, and always saddened by any customer (who passed). He knew all his customers; he had a lot of Canadian trade - people from all over.

While George regularly visited with customers, he spent an equal amount of time in the kitchen, cooking meals for his guests. His favorite part about that, he said, was "seeing people enjoy the food that I make."

"I've got customers that have been coming here for the whole 40 years," he said.

George didn't expect to find that level of success in Lewiston. Prior to taking a corner spot in the mini-plaza, he owned four restaurants and employed almost 200 people in the City of Niagara Falls.

"But, I ended up with a collapsed lung; I almost died at 30 years of age," he said. "I sat on the couch for almost a whole year, and I couldn't do anything."

He initially took "just one unit ... just a small little coffee shop, that's all I wanted, so I could make a living."

Of course, George did more than just scrape by.

"It got so busy within six or eight months that I was here, that I had to ask Nick's TV, who was next door, to move down to the other end so that I could put on a dining room. And he did, and we've been good friends forever," he said.

After serving customers seven days a week for more than four decades, George wasn't sure what he would do Tuesday, his first day of retirement.

"I've had a great business," George said. "I thank the Lord; I mean, I've been very lucky."