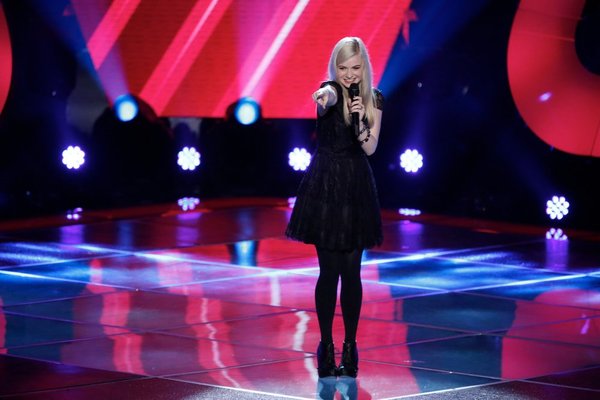 Season five of NBC's "The Voice" kicked off with rousing performances from a new batch of singers eager to work with coaches Adam Levine, CeeLo Green, Christina Aguilera and Blake Shelton. Among the week-one standouts, audiences met:

Did lighting just strike twice on "The Voice"?

Like Danielle, Holly is super-likeable and ultra-marketable. Unlike Danielle, however, Holly got all four judges to turn their "I Want You" chairs in her favor.

"I was honestly, like, really blown away by their support," Holly said. "I wasn't expecting one chair, let alone all of them. So it was honestly just really shocking, and really surprising, and it just meant the world to me, you know?"

Though, prior to "The Voice," Holly mainly wrote songs and performed in her room, she thinks this TV experience is something that could work in her favor.

"Yes, well, I think that if you really love something and you're passionate about something and you have the drive then, I mean, you can really go anywhere with it," she said. "And at this point, music is the one thing I have my eye on, you know? So I think just having a goal and striving for it (make it worthwhile)."

For her "Battle Round" performance (airing later this season), Holly took advantage of her three-time champion coach.

"Well, I think, just in general, he has made me or helped me be a lot more confident," she said. "Also, it's like the things he said; he has been so incredibly supportive, like, I honestly can't even - I don't know; he has said so many things, I can barely put it into words. But he has just always been there and he's just really approachable and just easy to be around. So, I mean, I just take everything in, you know, because I don't know, it's like he's always there for me, you know? He's a good guy."

On the show, Blake said, "Listen, because of you, I am officially excited about season five of 'The Voice' right now. I am pumped for this thing."

CeeLo said, "You have a very wonderful voice - a voice that deserves to be acknowledged by all four coaches up here. ... You have something special."

Working musician Destinee Quinn may be the most versatile performer on "The Voice." Consider: In her opening clip, Destinee was singing a soul song, "Son of a Preacher Man." In a biker bar. She described herself as a country singer. But she's opened for classic rock icon Alice Cooper.

Talk about reaching all genres of fans.

"I love music in general ... but country music is what comes naturally to me," Destinee said. "I can sing other genres, and I love singing songs from other genres because it grows me as my own kind of and just makes me a more-rounded artist, but I do really believe that country is where I'm supposed to be."

So, naturally, she'd work with "The Godfather of Shock Rock," right? It turns out, she won Cooper's talent contest and forged a connection with him.

"When I was 16, actually I was 15, at the time, Alice Cooper was hosting a talent contest, and it was open to adults and kids," Destinee explained. "And now the contest is only open to kids, but it was to benefit a foundation he has called The Solid Rock, which provides dance lessons and music lessons and tutoring and all this stuff for free for kids in the community.

"And then after that he let me open up for him more for more charity events and then we started doing commercials together. And, I mean, just seeing how invested he is in young talent and young artists, and he does a contest every year, has been just a motivation for me to keep going and keep pursuing it."

Destinee is hoping to take her career to the next level with "The Voice." Her take on "Cowboy Take Me Away" made CeeLo and Christina turn their chairs.

"It's such a pleasant surprise," CeeLo said.

"Real talk: I love what I heard. I want to be your coach. I want to get in there, and I want to win, already!" Christina said.

"That one amazing, outstanding note toward the end, it sold me. It just sold me," CeeLo said.

Destinee mulled over their comments and ultimately opted to go with Christina.

Singers often compliment the format of "The Voice." For the unknown, the bearded, the slightly out-of-shape, the show is an opportunity to be judged on singing ability, and not TV-readiness. This format also works well for someone like E.G. Daily, who starred alongside Pee-wee Herman in the classic 1980s film "Pee-wee's Big Adventure," and did voiceover work on "The Rugrats." For her, "The Voice" is a platform to sink or swim on singing ability alone.

In the second blind audition episode, E.G. netted chair turns from CeeLo and Blake. The former was more familiar with E.G. the actress as the latter expressed a desire to work with E.G. the vocalist. When CeeLo, Adam and Christina began talking about "Pee-wee's Big Adventure," E.G. quickly chose Blake to be her coach.

While it appeared E.G. had grown annoyed at the other coaches, she said she was just thankful she had the opportunity to succeed as a singer.

"You know, it's so to be expected," she said. "I mean, I've done, you know, I haven't - I've done a lot of music things; like, I've just been doing music things the whole time. It's just that it wasn't as popular as maybe some of the music or the animation.

"But, you know, I didn't really feel - I don't - I feel like it unfolds as it's supposed to, and for some strange reason the music thing is just sort of building underneath everything I've always done. And for it to come out now means even more to me. It feels like, today, music means more, and I feel it more, and I feel like I have so much more wisdom and peace about everything in my life, that I feel I can put that into the music. So for me to have the music come out now is such a gift - it's almost better.

"So I don't really feel annoyed, I sort of feel like everything unfolds as it is supposed to, and, for some ironic, strange reasons, you know, the music is sort of popping out more now. More people got a chance to hear how I sing, you know? For me, it has all been tied together. My career, I've always been doing music the entire time I was doing movies and the entire time I was doing animation.

"So, you know, just the public maybe wasn't noticing, but I have always been so connected. So I just think it's - what a great gift now to have it be more exposed, you know, and that I had the opportunity to have all the movie things and the animation things happen has been also a gift. I feel super-blessed in my life to have this amazing career ... that just keeps rolling."

For her audition, E.G. performed "Breathe." Of his student, Blake said, "It's not that often a singer comes along, no matter what genre they're in, that can have that much rasp in their voice, but also be able to hit all of the notes that you hit."

"The Voice" airs Monday and Tuesday at 8 p.m. on NBC. For more information, visit www.nbc.com/the-voice.