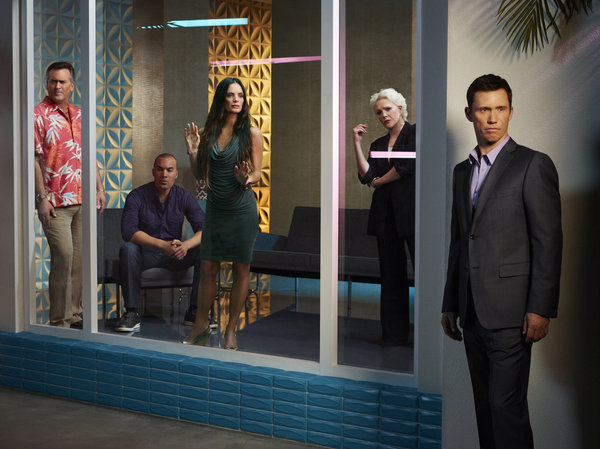 'Burn Notice': What will become of Michael Westen?

After seven seasons of watching Michael Westen and his friends dig for the truth on "Burn Notice," one question remains: When did Sam become the responsible one?

"I like it. Because, you know, reporters, the first couple seasons, were like, 'So, you're the guy that rats on Mike,' you know? I'm like, 'Shut up with that already. He's done with that. You know; characters grow. Sam was worried about his pension. You would be, too,' " Bruce Campbell said of his character. "So yes. Nice to have him - any character - grow from the fun-loving guy, to the guy who actually really is concerned for everybody.

"And everybody has their own moral strength. I'm glad to see that Sam had a pretty good moral core. You know he knew when something was really bad, and that it's a gut feeling. And everybody has it.

"So I think each character, at one point or another, was there to help, you know? It takes a village to raise a spy, so I think that's kind of theory."

In all seriousness, fans of "Burn Notice" know there is one pressing question left. Tonight's series finale will determine if burned spy Michael Westen, who has battled from the beginning to redeem his name and get back in the CIA's good graces, can now redeem his life.

Prior to this final season, Jeffrey Donovan hinted his character might go down a dangerous road.

"I think there's going to be a huge betrayal that you're going to see," Donovan said at the end of season six. "And I think the audiences are going to kind of be excited about season seven to see where Michael will go once he made this kind of - probably one of the worst decisions he's ever made."

Ten months later, "Burn Notice" fans have watched Michael walk away from Sam, Jesse, his mother - even Fiona. James, a dangerous and wily crusader who once fought for this country, has left Michael questioning everything - and everyone - he once held dear.

Reflecting on the process last week, Donovan said, "I think that the reality of the season was a lot harder than I imagined. And I give (creator and Exec Producer Matt Nix) and his team of writers a lot of credit for taking, not only the audience, but me the actor, down a path that was incredibly difficult."

On screen, audiences see Michael as a can't-fail super-soldier who will stop at nothing to achieve his mission. What Donovan learned this season was what drives Michael, and that is, ultimately, the relationship he had as a child with his father.

"You know, one of the things that Matt and I have always talked about was what's underneath, you know, what's the - when you peel away these layers of the onion, you know, what's at the core of Michael. And that journey was in the seventh season," Donovan said. "And what we find is a, you know ... I'm not being - trying to be funny, but it's a frightened little boy. And I'm not sure if I even knew that when I started the pilot with Matt.

"But no, with anything, the seven-year marriage with Matt and writers, it was a world of discovery that was really just an incredible joy to pursue. And a lot harder I think to pull it off in the end. It certainly tested my abilities. And I think that Matt might even feel like it tested his ability. But I think when you come - when you push yourself to create something that you've never done before, it's - if you do it right, I think it can - you can pull something off pretty magical. And I feel - that's what I feel like we pulled off: Something magical for our final season."

Which way will Michael go? Find out when the "Burn Notice" series finale, "Reckoning," directed by Nix, airs tonight at 9 p.m. on USA.

For more on the show, visit http://www.usanetwork.com/burnnotice.