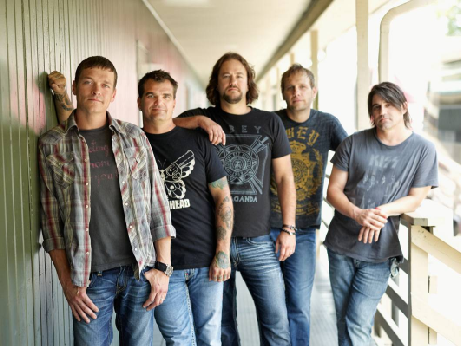 3 Doors Down hit the road with greatest hits in tow

With big-name acts and big tours grabbing headlines at the turn of the century, it was hard to imagine a small band from an even smaller southern town could turn rock radio on its head. But that's exactly what 3 Doors Down did with their debut, "The Better Life."

Behind hit singles "Kryptonite," "Loser" and "Be Like That," the album went four-times platinum. 3 Doors Down followed that effort up with the multi-platinum "Away from the Sun" and No. 1 singles "When I'm Gone" and "Here Without You."

The band has continued to record chart-topping songs and tour extensively. Just last month, 3 Doors Down performed in France, Germany, Sweden and Finland.

Lead guitarist and composer Chris Henderson still finds it hard to believe he's in such a successful band.

"We couldn't see past the little fence we hid behind, you know what I mean?" he said. "It was kind of an eye-opening experience just to leave that little town."

3 Doors Down is back in the U.S. and touring with "American Idol"-turned legit rock star Chris Daughtry.

"It's been awesome, man," Henderson said. "Both bands fit really well off the stage, as well as on the stage. And we play together each night, and we get along great. And I think the fans kind of translate back and forth between the two bands. Which is really cool, because there's a lot of people that'll go see Daughtry that won't go see us that are going to be there, and vice versa."

What those new fans will find is that, "We're a rock band, dude," Henderson said. "If no one's ever seen us play before, I think they'll be surprised about how much energy that we have as a band and about the way that we approach the crowd and the audience."

"A lot of bands stand there and play. A lot of bands do a lot of jumping and crazy, crazy, crazy. We're kind of between, but it's aggressive," he said. "We actually do play the songs. A lot of bands out there, they run tracks and you get some things that aren't coming from the guys themselves. We take pride in the fact that we're actually playing."

3 Doors Down is performing in support of their greatest hits album, which includes three new tracks.

As an aside, he mentioned, "With all the changes that were happening to the band at the time, and still are happening, it was a perfect opportunity for us to work in new members and go ahead and get all that done."

In April, 3 Doors Down bassist Todd Harrell was arrested and charged with vehicular homicide by intoxication.

"That's ... unfortunate," Henderson said. "Our hearts are with the families that were affected by it."

"No one really knows - us included - what's happening in that whole thing, but here we are," he said. "We continue to work. Obviously we don't have Todd with us. We have a new bass player who's going to be with us for the rest of the summer. And we'll see later in the future what happens. We really don't know."

3 Doors Down will tour until September.

This November, 3 Doors Down will participate in a concert and silent auction for The Better Life Foundation, a charity that band members formed a decade ago to raise money for children in need.

"I think the greatest gift that you can get is to give," Henderson said. "I think that we kind of grew up with that mindset. So it was an easy thing for us to do to create the foundation."

"How it started, we did a show for a quote-unquote charity in the south, and they asked us to play, and so we played for free," he said. "And we filled out this arena - us and another band filled this big arena out. But after it was all over, (when) we saw how much money actually made it to the charity, we were sickened by that. We decided to take a stand on that and start our own foundation. We need to give the money to who we wanted it to go to, instead of it going to vendors and people who don't need it. It needed to go to the charity, so that's why we started the foundation."

3 Doors Down and Daughtry perform Tuesday at CMAC in Canandaigua. For more information on 3 Doors Down, including tour dates, contests and social media sites, visit http://3doorsdown.com.