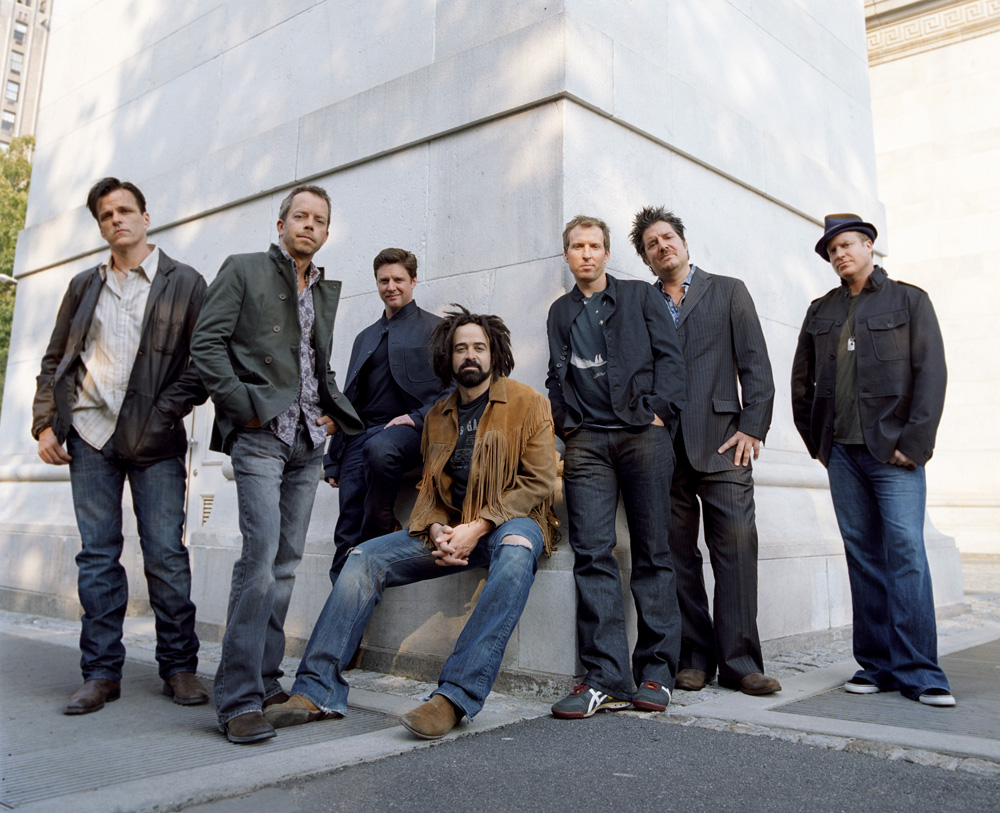 When the band performs Friday in Buffalo, fans can expect to hear all of them. ... Or none of them.

Frankly, we don't know what you'll hear from Counting Crows.

And neither does the band, for that matter.

"It's completely evolving while you're in it," Duritz said of his band's live show. "We don't play a set group of songs on tour. Every day after sound check we send a text out to the band and the crew. ... It just says, 'Anything you want to play tonight? Anything you want to hear.' And then they all send me texts back. And I make a list of what everybody requested. I don't necessarily follow it; I just make a list of whatever I want to play that night. (But) I use it. It's helpful, because I think the best show that you can play is (performing) songs that people want to play that night."

Counting Crows is sort of like those radio stations that proclaim, "Playing what we want." The band isn't taking requests.

"When we go on stage that night, we're not doing anybody a favor," Duritz said. "I mean, it's not, 'We don't feel like playing,' or we're going to play some songs that we're tired of. Whatever we're playing is what we want to play.

"To us, nothing is sacred that has to be played everyday."

While this approach may seem cavalier or conceited, it's not. Duritz said it's an attempt to provide fans with the most unique and unforgettable concert experience possible.

Counting Crows is not one of those acts that just phones in the same exact show night after night.

"We're playing a set for an audience that we really want to play. We want to be there at that point," Duritz said. "After 20 years, I think a lot of bands are kind of tired of what they're doing. I don't blame them, really, because I think a lot of them do play the same set every night. That means on a given night when you don't feel like playing a song, you're still going to do it."

"We've never done it that way, quite honestly," he said. "We play the songs that we want to play on any given evening. I think it shows in the performance, because we actually really want to be there, and we're into it."

There's no list - no song - that is a given on stage. There's no "memory of something that happened 20 years ago," Duritz said. "The songs grow and change, and they're constantly morphing into something new."

If you think about Duritz's logic, it really makes sense.

"We have a lot of songs," he explained. "We're working from a pool of, I don't know, what, 100-and-something songs, maybe? So there's a lot. That means that, chances are, on any given night, somebody didn't hear something they wanted to hear. ... There's no way everybody gets every song."

So, instead of guessing what might work for someone else, Duritz and company do what works best for the band.

Counting Crows just completed a series of shows in Europe with the "no-setlist-is-sacred" approach.

"I think our fans are a little different because we haven't necessarily had a series of hit singles," he pointed out. "I mean, we have some singles, but we've primarily been a whole-album band. And people bought whole albums off us. We didn't put out very many singles over the years. And as a result of that, I think, they have access to a lot of different songs on those records.

"We knew we made a lot of really good records, and they're pretty deep in songs. And the great thing about going to our concert is that you have a pretty good chance of hearing one of them. Because we're going to play stuff from the catalog every night. So, you know, you're going to hear a song that maybe you didn't think you would hear, or (that) some other band wouldn't normally play, or we don't normally play."

Or, because this is Counting Crows, not play "Mr. Jones."

"We got great reviews everywhere we played," Duritz said. "We were kind of a running joke because we didn't play 'Mr. Jones' on the tour. Just because the first night we didn't play it and the review the next morning said (we didn't play 'Mr. Jones' and,) 'It really didn't matter, because that's like the greatest concert.' And the guy flipped out. And I thought it was kind of funny that he actually made a point of saying that, and then saying it didn't matter. So like on a whim, the next night, we didn't put it in the set, either, to see what happened. And we got the same review again, from someone different in another city."

"I love that song," Duritz said. "I love 'Mr. Jones.' It's one of my favorite songs. But like I said, nothing is sacred. So even 'Mr. Jones' doesn't get played every night."

Counting Crows and The Wallflowers with special guest Willie Nile will kick off the 15th annual "Buffalo Place Rocks" Canalside Concert Series presented by M&T Bank and produced by Buffalo Place Inc. The show begins at 6 p.m. on Friday. Tickets are $16 in advance and $20 the day of the show. Advance tickets purchased will come with a copy of Counting Crows' new live album "Echoes of The Outlaw Roadshow."