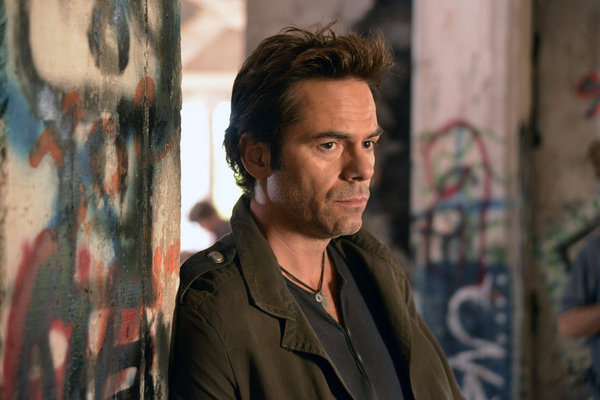 It was an amazing fight.

It was a key piece of the "Star Wars" storyline.

It was ... well, ultimately, it was really just a preview of their final showdown in "Return of the Jedi."

That same idea might be true for "Revolution's" Miles Matheson and Sebastian Monroe. Earlier this season, they battered, bruised and bloodied each other in one stellar fracas. The former besties, once thick as thieves, realized they could (and probably would) kill one another if given the opportunity.

But, their initial battle ended without a clear winner. Just like Luke and Vader.

In "Revolution's" season finale (10 p.m., NBC) Miles and Monroe will, once again, lock horns in battle. And, while it's unlikely one will triumph at the expense of the other, it's not out of the realm of possibility. This is a series, mind you, that has already killed off two major characters in its first season.

When asked, Billy Burke, who plays Miles, the war-hardened former Marine turned reluctant hero, said, "All I can say about the end of this season is that it sort of - it all comes down to everything we've been fighting for comes into question." He later added, "it's pretty safe to say that I don't think that we're going to end this season without, you know, some sort of final showdown between those two characters."

Will the evil Monroe succumb to Miles' sword (or laser blaster, for that matter)? Burke said he has "zero idea what's going to happen after this episode. I've not seen one line of one script for next season, so I don't have a clue what we're going to be going into."

One thing the actor is sure of is that he'll continue to enjoy whatever comes Miles' way. Burke, who, before this series was best known as Charlie Swan in the "Twilight" film franchise, said "Revolution" is a dream job.

"I've had more fun doing this than I've had doing anything in a number of years, actually," he said. "It's just been - it's been sort of a joy every day. It's hard work. I mean we - you know, we work an average of, you know, 14, 15, 16 hour days, and it's a very physical show - and I'm getting [email protected]#$ beat out of me all the time whether it's - whether the character is or not."

Burke relishes the opportunity to build his character in collaboration with the show writers.

"Initially, here's what you really appreciate as an actor: If you can be trusted," he said. "And I felt that from the very first moment that I sat down with (creator Eric) Kripke to talk about it. I felt like they were going to trust me to do what I was going to do with the material given.

"That being said, I'm so thankful to him and the rest of the writers for, you know, really giving a [email protected]#$ about, not only my character, but all these characters and the, you know, the precarious lines that they walk.

"You know, my character, in particular, has sort of taken a path around himself to get to where he is now. And that's always the greatest stuff to play with.

"Revolution" airs at 10 p.m. tonight on NBC. Find more about the show and stream full episodes at www.nbc.com/revolution.