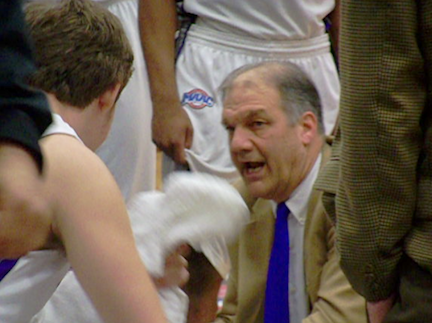 Article and photo by Suheiri Rodriguez

Sources said Hofstra approached Mihalich about the open position. Former Pride coach Mo Cassara was fired after a 7-25 season. Mihalich interviewed for the position Monday, and was offered a six-year contract Tuesday.

"Joe Mihalich has been a winner at every stop in his highly successful career," said Jeffrey A. Hathaway, vice president and director of athletics at Hofstra, at Wednesday's press conference. "He has worked his way up the ladder through hard work and dedication, and his work ethic has prepared him to lead our program. Hofstra University is fortunate to land such a dynamic educator, coach and leader, and we look forward to the start of his work with our current and future student-athletes. We are excited to welcome him to campus."

"I have to be honest with you, I wasn't looking so much to leave," Mihalich said. "When I recruited players up at Niagara, I would say to them, 'I would never leave here unless it was for a really special place, unless it was for something that was really a new challenge - a new chance to do something; a new beginning; a new life.' And that's what we're gonna get right here. I can't wait to get going."

Mihalich compiled a 265-203 record with Niagara and was a three-time Metro Atlantic Athletic Conference Coach of the Year. He led the Purple Eagles to two National Collegiate Athletic Association Tournament and three National Invitational Tournament appearances.

Niagara Director of Athletics Tom Crowley said he was not surprised to see Mihalich go because the idea of his departure had been "floating around for the past couple of weeks."

"It was a stream of consciousness," he added.

"I guess probably, I'm more surprised that Joe was here as long he was, given the level of success that he's had," Crowley said.

In a statement, The Rev. Joseph L. Levesque, C.M., president of Niagara University, said, "I have always believed that Joe was a very good coach on the basketball court but, more importantly, he has been a tremendous coach for our players and students off the court, as a leader, role model and mentor, as evidenced by this year's Skip Prosser Award. We wish him great success. For the Niagara community, he will always be a Purple Eagle."

With regard to a replacement for Mihalich, Crowley said, "We like to move as fast as we need to move. We need to be thorough and be complete, but we will not rush. But we will try to move as quickly as we can to find the right person."

"There is a ton of interest in this job and I am quite confident we are going to get ourselves a very good basketball coach," he added.

Niagara officials said Mihalich plans to take his assistant coaches Kyle Neptune, Mike Farrelly, Shane Nichols and Colin Curtin with him to Hofstra. However, they are expected to remain a little longer at NU to work with current players prior to a new coaching staff's arrival.

Crowley said NU's men's basketball players have initially indicated they will return for next season.