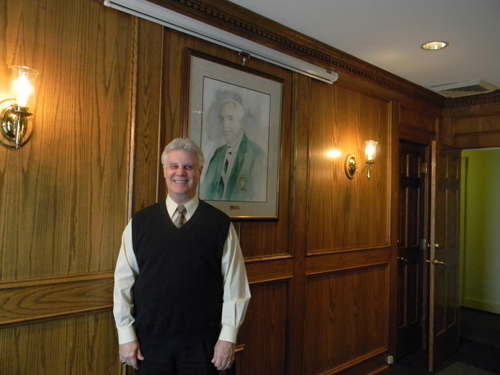 Photo and story by Terry Duffy

It may be the off-season for area golfers, but that doesn't mean the folks at the Niagara Falls Country Club have been quiet.

Far from it. Management at the exclusive course found at the top of the hill in Lewiston has its eyes on the future, with enhancements on improving the facility's already enjoyable golf experience ever a part of their focus. In fact as NFCC now sees it, "It's not your father's country club." So says Allan R. Irwin, CCM, CCE, president of Intergolf Inc. of Ashton, Md. Irwin is currently serving as interim general manager for the Niagara Falls Country Club. And he has some exciting ideas in store for its existing and future membership.

"We've just hired a new membership director ... his name is Corey Brown. ... We are in the process of growing our membership," says Irwin. He reports the NFCC currently has about 365 members in all categories. Irwin wants to build on those numbers, with an emphasis on promoting what he calls "the niche" experience already found at the private Lewiston club.

"We would like to build that up, golf and social both," says Irwin.

The NFCC you see, is well regarded as one of the premier golf destinations to Western New York as well as southern Ontario golf circles. The facility boasts an 18-hole, 6,621-yard, par 70 championship golf course with 90 challenging sand traps, originally designed in 1919 by A.W. Tillinghast and recently updated by Robert Trent Jones, Geoffrey B. Cornish and Brian M. Silva.

It's also home to the esteemed Porter Cup - one of the top-ranked invitational amateur tourneys in the U.S. that, over its 54 years, has seen many of the upcoming greats in the golf world participating. Stars such as Ben Crenshaw, Tiger Woods, Phil Mickelson, Davis Love III, David Dual, Tom Lehman, Hall Sutton, Justin Leonard - just to name a few.

But the NFCC is more than a golf course. Much, much more says Irwin. "We are a family club."

Situated atop the Niagara Escarpment, the 93-year-old facility offers breath-taking views of the lower Niagara River region extending out north across Lake Ontario to the Toronto skyline. And the offerings for its membership are extensive. Dining and social facilities in the main clubhouse include the main dining room; the member dining room; the living room; the Porter Cup room; and the patio.

That's not all. The NFCC also features "The Halfway House" with a snack bar and fully stocked pro shop. It even offers on-site suites for out of town visitors. Accommodations include two one-bedroom, one-bath suites and one two-bedroom, two-bath suite - all offering the amenities one would expect in a four-star destination, plus spectacular views overlooking the escarpment.

"We're a full service country club; they're a golf course," says Irwin, in answer to any comparisons of the NFCC to its newest golfing competitor in the area - the Seneca-Niagara Hickory Stick Golf Course.

A visit to the Niagara Falls County Club indeed finds it's not your typical golfing destination. It is beyond others found in the immediate area, both in facilities and offerings for its membership, and ranks among the best private clubs in Western York and southern Ontario. "If you look at what you have available to you here as a member - tennis, golf, food, beverages, the social activities, the pool ... and the fact that you can come here as a family, I think we become an attractive alternative (to others)," says Irwin. "We are a family club, we have family activities. And it's affordable."

Speaking of cost, Irwin says the country club now has a special membership incentive program that features no payments due up front, and a five-year reduction plan that at the conclusion of the fifth year sees no initiation fee. Full membership fee beyond the initiation fee is $375 per month. Other plans vary in cost.

"The promissory note declines by $1,000 annually and is completely forgiven after five years," according to the club's 2012-13 membership incentives literature.

"Our market is the full service country club for the whole family," says Irwin. "We offer golf programs for families ... and we have some new offerings."

One new item for the younger set is what Irwin calls "SNAG golf, offered for kids under age 8. "It has special equipment, larger holes, different holes ... it started last year and went well."

Irwin says a new junior golf pro will be joining the NFCC staff this year to facilitate the programs. "I want someone who will be passionate, really fired up" on this. Stay tuned for news on an upcoming appointment.

Beyond that, the NFCC intends to focus on programs aimed at improving the overall golf experience. Such teasers discussed to lure new members include a player development program for those new to the game - geared to beginners and offered in a non-intimidating atmosphere; Sunday afternoon golf for families, Shot Tuesdays - open to golfers of all levels; women's executive golf offerings; even plans on specially configuring the NFCC's 18-hole course to handle three separate rounds of six hole golf to appeal to newcomers to the game.

Beyond that is the wide variety of social offerings found at NFCC with appeal to all ages. Summing it up, Irwin says, "It's a great time to join the club. We offer a lot here; we're not just a golf club. I see this as serving a 'niche' market. It's the place to be.

"It's not your father's country club," he stressed.

For more on the Niagara Falls Country Club and its membership packages, contact the club office at 716-282-1204 or visit the NFCC website at www.niagarafallscc.com.