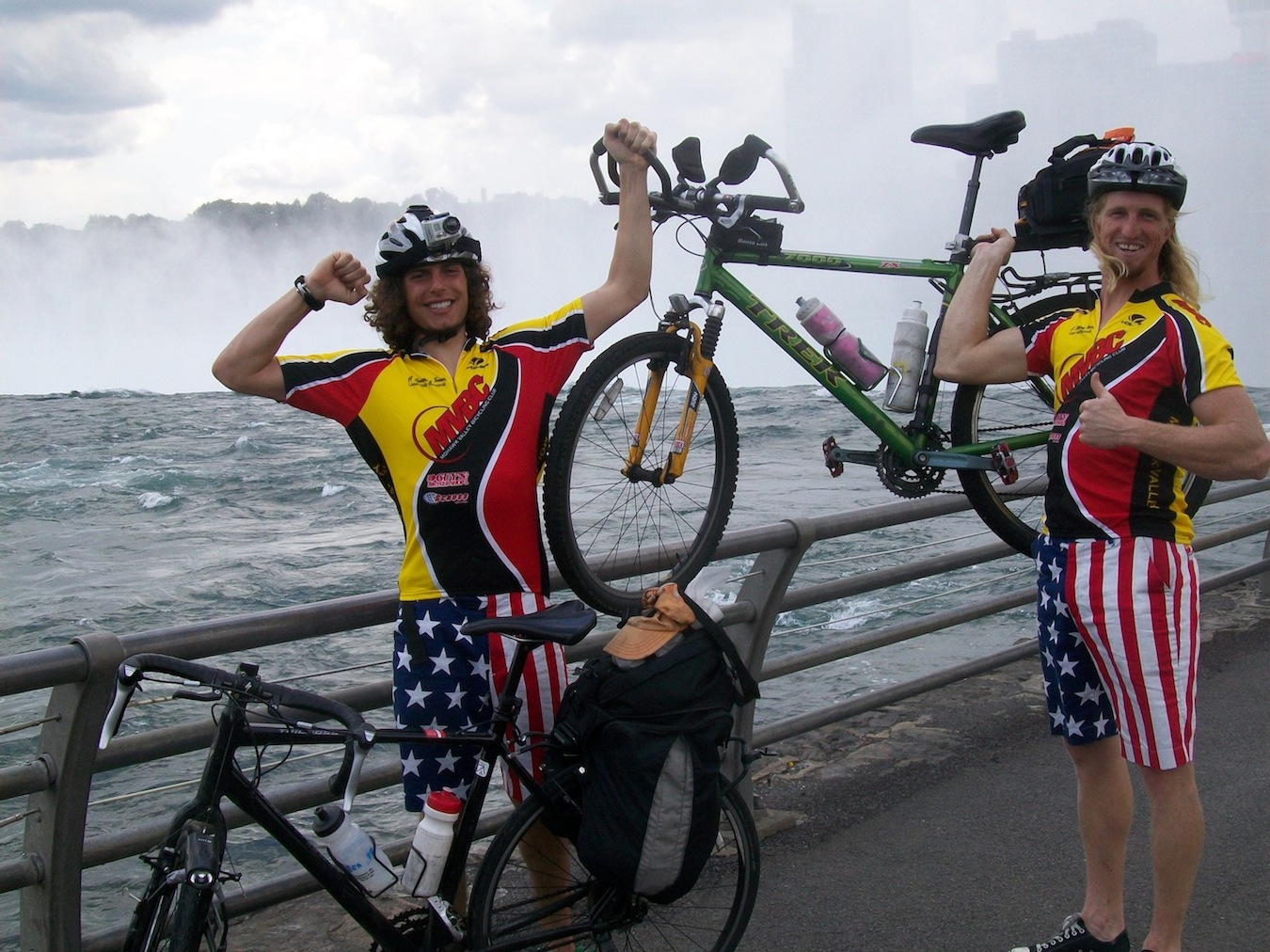 "Mike & Nate Bike the States" - including Niagara Falls. Surprisingly, they did not wear their trademark uniforms for these pictures.

Mike & Nate give new meaning to the phrase, "God works in mysterious ways."

They did this while wearing neck-to-toe spandex suits.

Mike's was green; Nate's was yellow.

"Our suits have multiple benefits," Nate said. "The first benefit is it keeps us seen on the road. It also carries our advertisement, so we're biking billboards. That's one way we've been able to give back to the Wounded Warrior Project (through sponsorships).

"(The suits) keep the sun off us, so we've never had to wear sunscreen. They also keep you cool. By keeping the sun off you, your sweat is allowed to get cooled off by the cool air breeze."

On June 25, "Mike & Nate Bike the States" kicked off in Key West, Fla. Over the next month-and-a-half, the Boca Raton "besties" biked an average of 50 miles each day (arguing only once), while raising $10,000 for the Wounded Warrior Project. They said there's up to $40,000 in pledges yet to be collected.

"We still hope and expect America can donate the rest of the money," Nate said. He and Mike passed out 2,000 fliers with donation information, and received about 1,000 pledges.

Mike & Nate ended their journey Sunday, arriving in Niagara Falls. On Monday, they had lunch at the Top of the Falls Restaurant and planned to experience the Cave of the Winds and ride the Maid of the Mist - all courtesy of the Niagara Tourism and Convention Corp. Remarkably, Mike & Nate's cross-country trek cost less than $100. They relied on the kindness of strangers (not to mention tourist organizations) for meals, and stayed overnight for free in places ranging from an island mansion to a fire department, West Point to a crime-riddled inner city, mostly courtesy of CouchSurfing.org.

They even showered every day!

"Our planning was well-thought out," Mike said. "It was about six months prior to us leaving. We brought on some sponsors, that are on our bike suits. ... We also were able to gain a little bit of publicity beforehand. But the most publicity along the way was ... we just saw a cameraman and we flagged him down. 'Hey, we're more interesting than a gunshot!' "

"The best PR was our suits," Nate added. "We made our own publicity. Also, my father did a great job of contacting news outlets along the way. And mayors and everything - we shook hands with the mayor of Richmond (Va.). We had a dozen news interviews on TV. We were able to create our own PR through just what we were doing. We wanted to get the word out there, (to raise) awareness, and get America to go to the website and click on the donate tab.

"We had a great time doing what we did."

Mike & Nate embarked upon this journey because, "We love God. We love America. We love people. To tie all three of those ideas together, and beliefs together, we wanted to bike across America to see this great nation, but also do it for a selfless reason," Nate said. "What better reason than the wounded warriors that have chosen to stand up for our freedom across seas and come back wounded, and who will for the rest of their lives be wounded? So, we wanted to raise awareness and financial support for them because, well, they're going to have to be that way for the rest of their lives. Why not spend 50 days giving back to those that have fought valiantly for our life and liberty here in this nation?"

Mike & Nate are not bicyclists. To prepare for their trip they did ... nothing out of the ordinary.

"We are athletic," Mike said. "We have done triathlons in the past. ... We play pick-up sports. We run for fun. We're ghost runners. We appear at 5Ks, but aren't signed up, and we just run with them."

The duo did, however, bring a full biking kit.

"We're pretty much a cycling bike shop," Mike said. "We have everything we need to change a tire; to change a chain; to adjust every nut and bolt on the bike. We've learned along the way how to do everything with the brakes and the handling. It's been a learning experience."

"I was against this suit idea, because it's Mike's company, but I, basically ... snuggled up to the idea. It's like a hug all the time, wearing a full-body suit," Nate said.

"We fit the suits, and the suits fit our personality," Mike added. "We're very extroverted and we like to be noticed.

"That's what the suit is all about. It's about drawing attention and turning heads, because once people are inquisitive, you're able to enlighten them and tell them about the Wounded Warrior Project, which was a really big plus for this."

From Niagara Falls, Mike & Nate were headed back home to Florida.

For more information about Mike & Nate, or to make a donation to the Wounded Warrior Project, visit www.mikeandnate.com.