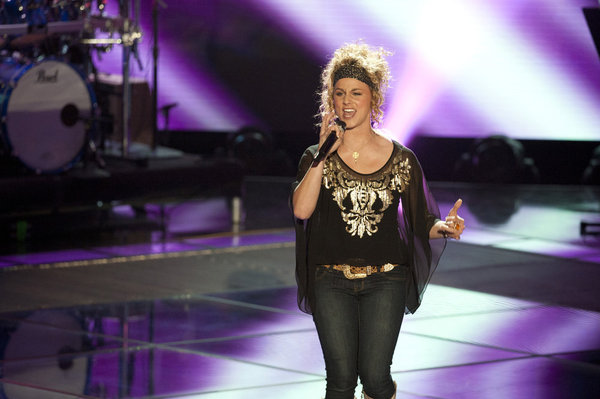 Countless singers toil away at their craft for years, working with vocal coaches, stylists and image consultants, hoping to land that "big break." Most are willing to do just about anything to land a record contract or a national spotlight.

And then there's Adley Stump.

She was just being herself when, on a whim in her junior year of college, she picked up a microphone for the first time.

"I've done choreography my whole life," she explained. "I was doing choreography for my sorority. They basically dared me to try out for the solo part for this show that I was choreographing, and I'll take a dare from anybody, so you know, I did it. And I think everybody was kind of shocked at how it sounded. I was kind of shocked by how it sounded. And they ended up giving me the part, and I went on to win an award across Oklahoma State with it."

But that was just the beginning.

"I won a contest the end of my junior year, had summer break, came back my senior year and I was like, 'All right. I want to do this.' So I started playing out in that saloon once a month, and then that's when my video got on the Internet. My mom posted it up, and an investor from Nashville - we started talking and he brought me to Nashville. And immediately we produced the album in five months," she says.

A prestigious award. ... A budding new career on Music Row. ... A seven-song EP showcasing her writing and guitar skills.

What more could a musician with less than one year of singing experience want?

How about an audition on NBC's "The Voice"?

Adley performed Monday on television's top-rated reality/music show. After a bidding war between the coaches, she accepted an offer to perform on Blake Shelton's team.

In less than two years, Adley has flipped the script on the most notoriously ruthless, unwelcoming industry, and scored a level of success most musicians with 10, 20 and 30 years of experience have yet to attain.

For Adley, this musical journey has been nothing short of a whirlwind.

"The last nine, 10 months have been - I've been in Nashville about eight-and-a-half months. I got an offer to move here with an artist development deal, publishing and smaller record deal from a private company. And about a month before I graduated - at that time I had been singing about eight to nine months, just goofing around in Stillwater - (I) started to take it seriously about the last - my senior year in college is when I started taking it seriously, but never thought I could do it," Adley said. "I was playing in a saloon about once a month in Stillwater, Okla., just you know, goofing off for my friends. And we were able to gather a huge crowd, but it was all in good fun. And then me and my mom put a video on the Internet and that's (when an investor in) Nashville saw it, and said he saw a spark in me that he believed in, and he started conference calling, and he asked me to move out to Nashville and said he would back me if I did."

"The Voice" soon followed. She joked about the opportunity, saying, "I found 'The Voice' because I was, you know, a broke college student, and I thought, 'Man, I'm broke.' I need to go be on 'Jeopardy.' So I Googled how to be on 'Jeopardy,' and there was a list of reality shows pulled up. I found 'The Voice' on there, and you know, I saw auditions in Nashville at the time."

The television audience on Monday quickly fell in love with Adley's sense of humor, her Oklahoma accent, and her unique sense of style. She comes across as extremely intelligent and, despite her newness, she is highly polished.

Unlike some others in her position, Adley is not fake; she's not pretentious or trying to pull a fast one on audiences. As she said, "I'm Adley. Here's who I am."

"I'm just watching how God, you know, from my eyes, placed the puzzle pieces of my past to be able to be in this moment and be the best that I can be," she explained. "I worked for a non-profit called To Write Love on Her Arms: Presenting Hope and Finding Help for People Struggling with Depression, Addiction, Self-Injury and Suicide for two-and-a-half years. And I was the president of that at Oklahoma State, sort of representing that - meeting the need where it's at.

"That's been part of this journey for me, and I feel like America's getting to watch me grow up and learn how to be a singer and how to be an artist. But I'm trying to pull from my record and other gifts that I felt like God had given me to be able to do what I'm supposed to do now."