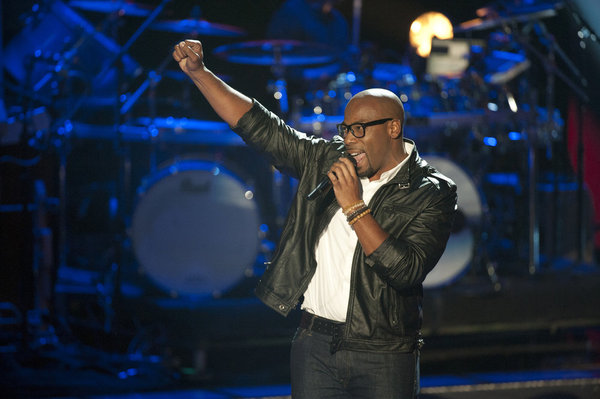 Pictured from "The Voice" is Anthony Evans. "The Voice" airs Monday at 8 p.m. on NBC. (Photo by: Lewis Jacobs/NBC)

Some of the world's best singers, rock guitarists and lyricists are unknown to the masses. They have record contracts, industry acclaim and an ability to sell out the largest theaters. And yet, performers such as Natalie Grant, Vicky Beeching, Brian Bunn and Regie Hamm are far from household names.

It's because they're genre is Christian music.

They are part of the music industry, but well below the pop-culture radar. Their songs are performed in hundreds (if not thousands) of churches each Sunday, but it's unlikely you'll hear them on top radio stations unless they release straight-up pop or rock albums (think Amy Grant, Robert Randolph and Switchfoot). And even then, successful Christian "crossover" artists are few and far between.

Talking to BTS, Evans said he auditioned for "The Voice" because, "I'm hoping the show will broaden what I do," he said. "I think from the career perspective, I'm wanting it to broaden what I do. I don't want to leave behind the industry I've been in, at all, but I want to move forward. As a person, I want to grow, and taking risks like this helps you grow."

Before his blind audition for coaches Christina Aguilera, Adam Levine, Cee Lo Green and Blake Shelton, Evans admitted the number of people watching his one TV appearance was greater than the total number who had seen him on stage over 10 years. But that didn't shake his confidence or cause him to doubt whether a Christian singer could "make it big."

"I don't know why it's so hard for a Christian artist to be 'successful' in the industry," he said. "I honestly just cannot answer that question (why so few are), because I've watched people do it, and I've watched it - it kind of worked with some, going back to, like, Amy Grant, and how she crossed over, and how that's been great; or Joy Williams, now with The Civil Wars, she was a young Christian pop act, you know, earlier when she was, like, 14. So it's worked for some and for others, it just doesn't."

When it doesn't work, Evans said it's not the music that's lacking, but rather the way in which it's presented.

"I guess it's just an issue of an audience being able to smell a rat," he said. "Not being derogatory to anybody who it's not worked with, but I feel like if you're being disingenuous, whether you're doing Christian music or pop music - whatever kind of music - if you're being disingenuous, then people ultimately don't connect with that. That's why I'm really trying to stick to who I am and not trying to change me."

With that mentality, some might think Evans is mismatched with "Stripped" singer Aguilera. But, surprisingly, he said his coach is a perfect fit.

"I love that Christina is not trying to change me," he said. "She's not like, you know, 'Hey Anthony, let's sing "Bionic" and "Dirty." Let's change who you are.' She's not trying to do that. She's allowing me to be myself."

For Evans, that is key to his success in season two of "The Voice."

"I believe that's what translates is you being authentic and (true) to who you really are, so I'm hoping that will help this scenario work," he said. "You just never know, but it's worth trying, and I'm excited about the fact that I get to try on a platform this large."