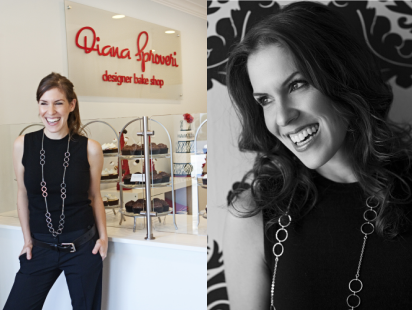 Though I have yet to try one, I'm quite confident Diana Sproveri's LOLLIBAKES gourmet cake pops are the finest dessert ever imagined, created or consumed.

Think about it: a gourmet version of a cake ball is served on a stick. It's portable, poppable cake! Cake at your fingertips, anytime you want it!

And yet, Sproveri, who created this pastry perfection, is fit as can be. How does that math work?

"You know it's funny: When you're around sweets all day long, the last thing you want to do is eat something sweet," she says, with a laugh, in between batches of chocolate. "Trust me: You want a salad."

Sproveri is bringing her LOLLIBAKES to Buffalo next weekend, where she will serve them at Sabres goalie Ryan Miller's Steadfast Foundation fundraiser, "Catwalk for Charity VI: Wrangling for a Cause."

"When I was talking with people from the foundation, they wanted something that was a little different for their VIP section," Sproveri says. "I was going to donate a box of LOLLIBAKES, and when we started talking, it just seemed to kind of make sense that serving LOLLIBAKES in that section at the event would be a great thing."

The Dec. 4 benefit is a homecoming for Sproveri, who grew up in the Town of Tonawanda and graduated from Kenmore East High School and Niagara University. Now living in Los Angeles and providing pastries for celebrity clients (including Zachary Levi, Jennie Garth, Paris Hilton and Katharine McPhee), Sproveri's desserts are a mainstay at Hollywood events such as the Oscars, Emmys and Golden Globes. In the fall of 2010, she opened Diana Sproveri Designer Bake Shop on Ventura Boulevard in Tarzana, Calif.

"I actually haven't been home in almost a decade, in almost 10 years, and I am beyond excited," she says. "Not only to be a part of the event, but to come home to Buffalo during the holidays. I'm thrilled!"

Moving to the West Coast was always part of Sproveri's plan. But, in her mind, L.A. was supposed to be the place where she'd write for television and film. The baking thing? It kind of just happened.

"It's been around my whole life," she says. "I grew up in a family of chefs and bakers, and it was always around. I was always making things at the holidays with my mom. My grandmother was a fantastic baker. In fact, a lot of the recipes that I use at the shop are my grandmother's. It's one of the things where I always did it. I would always do boxes of Christmas cookies for friends.

"But I had come out here, and I was a TV and film writer - and, actually, I still am from time to time - and I found that during the down times I was having more fun baking and making desserts, and I taught myself how to do everything. I worked my way through the Cordon Bleu pastry book, and I do everything - from making my own caramel sauces and crème brûlées, to just making chocolate chip cookies now."

"I started doing little catering things here and there for parties," she says. "And because of being where we are, I ended up working for quite a few celebrities privately. And a lot of those parties that I did were for TV shows and films, and it just kind of started a buzz around here. But all of the recipes that I use have their heart back in Buffalo."

Sproveri started to realize she had a knack for baking when clients would react in the much the same way I did.

"It was when other people would taste things and see things," she says. "I was an art major in high school and, so, I basically tried to put a little artistic twist on everything that I did. And I would serve things at some of these parties. The reactions from people were, just, 'I've never had anything like this before.' And, 'This tastes so good; it's so much better than what I've had at other places.'

"It's one of those things where, when I started getting feedback from people, that it wasn't just, 'Oh, this is good,' but they were blown away by it.

"Cake balls have been out there for quite a few years, and cake pops started becoming popular I want to say maybe four years ago. A woman named Bakerella, she took cake mix and icing and mixed it together and made a cake ball and just did it in chocolate and made little characters and things. And I saw the idea (and, having a) chef background, I said, 'I want to make this completely from scratch and completely gourmet.' And so I spent a good six months, trial and error, creating cake and icing, specifically when they are mixed together to create something, as well as other ingredients that you use in truffles. And it just kind of grew from there."

LOLLIBAKES made its debut in typical Hollywood fashion.

"The first time I actually served them was, I was asked to do a party for David Schwimmer from 'Friends,' " Sproveri says. "He asked for everything on my menu. And I said, 'You know what? This is the perfect time to give LOLLIBAKES a shot.' And I did, and they were a hit.

"Since then, I cannot stop making them. They are, hands-down, the best sellers in the shop."

Find Diana Sproveri and LOLLIBAKES online at http://dianasproveri.com/. P.S., LOLLIBAKES ships nationally during the holidays (!), and a portion of the proceeds will benefit the Steadfast Foundation.