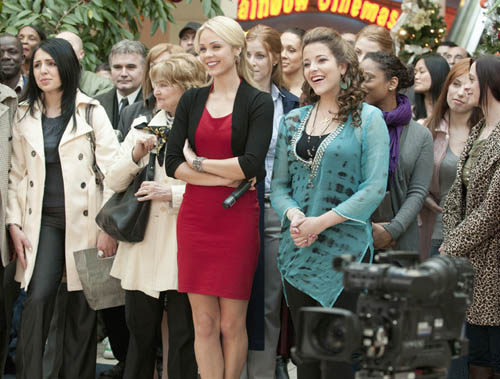 When you star in television shows based on "Superman" and the '80s cult classic "V," as actress Laura Vandervoort did, you're in for life with sci-fi fans.

As nice as that sounds, sci-fi success can also pigeonhole an actor, limiting potential roles to Mars explorers, alien hunters and parts in "Mega-creature" versus "Shark-a-something."

Fortunately for Vandervoort, she's managed to remain in the good graces of the former while departing from the latter.

In a shift from her "Supergirl" and "Lisa/Visitor" parts, Vandervoort recently filmed the action-packed, "Spy vs. Spy"-inspired "This Means War," and the Seth MacFarlane comedy "Ted."

"I've been in the sci-fi world for a couple of years now; both shows have had huge fanbases, so people always ask questions about them," Vandervoort said of "Smallville" and ABC's "V" remake. "You know, it was nice to mix it up and do some of these films that I've been doing in the past year -- and play humans -- and try some comedy and some romance, and I just wrapped a thriller. It's nice to mix it up."

"First of all, I've never really done a romantic comedy," Vandervoort said. "And working for ABC is something that I always enjoy doing. So, it just made sense. And after I read the script, I just thought it was really cute. And I hadn't done a Christmas movie before -- something that my whole family could watch."

Vandervoort stars as Jennifer Walker, an overly ambitious marketing executive for a South Boston mall. In an attempt to generate more customers, she concocts a "Hot Santa" search, which brings out curious moms and daughters, and drives up sales. In the process, Jennifer meets David Moretti (actor Nick Zano), a man looking to win the contest -- and the $10,000 prize -- to support his struggling family restaurant.

Along the way, Jennifer starts to see her life a little differently.

"She was similar to me," Vandervoort said of the role. "Jennifer Walker, my character, was very work-driven, and sometimes forgets to kind of have fun and enjoy herself. Even during the filming of this movie, I was going through what she went through during the movie, which is actually relaxing and having fun during the process of working, and realizing that you don't have to take it as seriously; you can enjoy it.

"And I loved the storyline of it. She's a Scrooge in the film -- without family -- and she realizes the true meaning of Christmas is not about the profits and the sales, it's about being with the people you love."

Vandervoort, who grew up right around the corner in Toronto and North York, is eager to be with the people she loves this Christmas.

"I had the snow every Christmas (in Toronto). I had a great childhood growing up in Canada, and I just recently moved to L.A. But I go home as much as I can," she said. "I'm going home this year for Christmas to be with my parents. I'm going to the cottage for Christmas."

Vandervoort, who plans to send her family a copy of "Desperately Seeking Santa," said the recipe for a winning holiday movie is simple.

"I do love films that make you feel good, and can make you smile, and make you forget about maybe the things that aren't so great that are going on. You can just sit there with your family and kind of get lost in the film," she said.

Some of Vandervoort's favorite Christmas films include " 'A Nightmare Before Christmas,' which people, I think, are finding a little odd and funny, but I love Tim Burton," she said. "And there was a film called 'The Abominable Snowman' that I watched growing up. It was like a clay-animation movie. And then all of the classics -- the black-and-white films (like) 'A White Christmas.'"

When Vandervoort returns to work following her holiday break, she knows her "Van-atics" will be ready to support her next project.

"It means everything," she said of her fanbase. "Not to sound cliché or cheesy, but it's hard to get anywhere in this industry unless you have the support of the fans. And sci-fi fans, for sure, have been great to me. I've been to comic conventions and they've supported my work. And thankfully a lot of them have followed me on to other things that aren't sci-fi-related.

"They are very dedicated fans. I'm thankful for that. Sci-fi has been a great place to start."

"Desperately Seeking Santa" airs Sunday, Nov. 27, at 8 p.m. Click here for more information on the film and on ABC Family's "Countdown to 25 Days of Christmas."