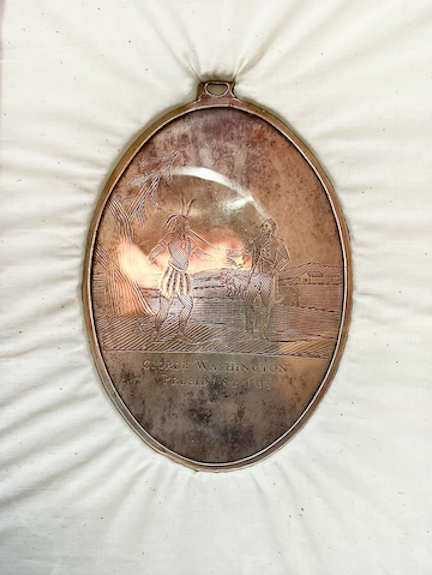 In the American Revolution, the Haudenosaunee Six Nations were divided. The Mohawks, Senecas, Cayuga, and eventually the Onondagas would fight on the British side. While the Oneida and Tuscarora sided with the American Colonists. Within Tuscarora history there is a prominent figure from that time period.

Nicholas Cusick was born in Onedia, New York, in 1756 when the Tuscarora’s were under the wing of the Oneida.  He was just a teenager when he joined the war. Cusick was able to eventually become a Lieutenant, serving five years total in that war. After his service in the American revolution, he moved to the current Tuscarora Territory, located near Niagara Falls, New York.

In 1793 Nicholas Cusick received a Peace Medal from US President George Washington, for his leadership in the war, with different Haudenosaunee delegations, and his involvement with his own people and being a Tuscarora translator.

How did the medal end up in Oklahoma?

This is when Nicholas Cusick’s grandson comes into place. Cornelius Cusick followed in his grandfather's footsteps, fighting in the Civil War on the side of the north.

“After that he got involved in the regular US army, fighting other Natives out west, across the Mississippi,” said Vince Schiffert, a Tuscarora Turtle Clan member, researcher, and Instructor.

“He was the last Tuscarora person to have that medal, and he was in Oklahoma on the Sac and Fox Territory in 1872” Schiffert said.

The history of the Medal after Cornealious Cusick is still being pieced together; an article was found in an issue of the Wichita Daily Eagle. The article is an interview with Mr. William P. DeLesdernier. The article states "Mr. DeLesdernier told me that he secured it from Captain Cusick, a descendant of a Tuscarora chief, who had originally received it".

The history of the Medal is unknown from around the 1870’s to 2021. When members of the Chickasaw Nation of Oklahoma found the Medal at an auction. Determined to figure out its original owner. Through research it was found that the medal belonged to the Tuscarora Nation.

“Their research found out that it was a Tuscarora medal, so they reached out to us, Tom actually” Schiffert said. The Chickasaw Nation contacted Tuscarora through Bear Clan Chief Tom Jonathan.

The meeting between the two nations.

“It turned out to be another opportunity for us to exchange culture and history. In a short time, we were able to develop a relationship and hopefully we can continue that relationship into the future” Ferguson said when asked about his experience meeting with the Chickasaw.

“Just gave us a tour of the nation, all their facilities, told us the story of how they got it. They had this really nice, kind of like ceremonial event where they gave it back,” Schiffert explained.

The governor of the Chickasaw Nation, Anoatubby, turned the medal over to Chief Johnathon. Gifts from the Tuscarora nation were exchanged at the event, along with many pictures being taken of the memorable event.

On Nov. 5, the medal was on display at the Tuscarora Nation house for the public to see.  Followed by a dinner event, which included presentations by members of the Tuscarora Historical Society on Nicholas Cusick, Cornealious Cusick, and Mitch Carver, the lead researcher for the Chickasaw nation. Members of the Chickasaw Nation attended the medal showing, and the dinner afterward, where gifts were exchanged for members of both nations.

The finding of the medal made for a beginning of a new friendship between the Chickasaw, and Tuscarora.

“It’s really nice to have an event like this, to remind everybody that there’s still a lot of work to be done by our people” Vince Schiffert answered when asked the significance of the event.

8. 2021 – The Peace Medal is in Chickasaw Nation possession

The impact behind gaining the medal back

“The medal being back in Tuscarora can serve multiple purposes. It can serve as a reminder for us, to start conversations so that we don't forget that portion of our history. In today's day, the medal can also be a metaphor for reclamation of history, culture, stories etc.

“I think what it means to have the metal back is that it recognizes our willingness to one defend just the lands that you know where we live in to defend turtle island or home lines, but it also recognizes that at one point you know we were friends that they were not friends with the US,” said a Direct defendant of Nicholas Cusick, who wished to remain anonymous.

“It kind of shows the importance at least in the 1790s of the relationship between the United States, at least for us Tuscarora and Haudenosaunee” said Schiffert. He continued “It’s a part of our history, it’s a part of one of our former leaders, you know. What our leaders do becomes part of Tuscarora Nation history.”

This medal shows the resilience, and relationship that the Tuscarora people have had with the United States since the beginning and should also be a reminder for many to keep learning.

“We need young people to keep learning history and keep diffing, exploring. Because this thing is 250 years old. And yet it’s something new that we just learned about and got back. Who knows what else is out there that we can continue to learn about our history” said Schiffert.